What washing machines can teach us about the cost of tariffs

Recent trade wars between the United States and other countries have raised the question: Who pays the price when countries raise tariffs or impose other import duties?

It has been difficult to tease out price effects due to a lack of data. But uniquely available statistics on washing machine production and pricing has provided University of Chicago scholars with a clear answer: When global tariffs were applied to U.S. imports, consumers bore the added cost—with prices jumping more than 10 percent.

The finding, along with insights into how manufacturers evade tariffs and the price effects on complementary goods, is explored in a new Becker Friedman Institute working paper, co-authored by Prof. Ali Hortaçsu and Asst. Prof. Felix Tintelnot of the University of Chicago and Federal Reserve Board economist Aaron Flaaen. 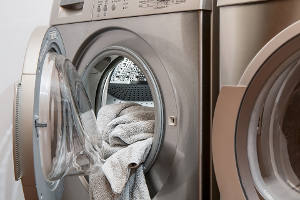 Foreign washing machine production has long vexed U.S. manufacturers. A series of tariffs and import duties were placed on foreign manufacturers of washing machines in recent years as U.S. companies complained about product dumping and other trade infractions. Each time the U.S. would take aim at a particular country, though, manufacturers would quickly move their production facilities to another country and resume business. The positive unintended consequence of this “country hopping” was that prices actually declined as manufacturers improved their efficiency with each move.

That changed when global tariffs on washing machines were applied in early 2018. Prices of washing machines climbed about 12 percent for U.S. consumers as foreign manufacturers could no longer shift production to other countries. Further, and somewhat surprisingly, the prices of dryers increased by the same amount, even though dryers were not affected by the tariffs.

U.S. manufacturers and workers did see some benefit from these global tariffs as production shifted stateside, but those new jobs came at a steep price. The authors estimate that the increases in consumer prices translated into a total consumer cost of $1.5 billion per year, or about $820,000 per new job.

This unique research offers two broad lessons for policymakers: Tariffs applied to individual countries may be ineffective; and tariffs applied globally tend to result in significant costs to consumers. As for consumers, they not only pay a higher price when tariffs are applied globally, but they also may suffer an efficiency loss if those higher prices prevent them from affording new products that could bring them benefits.