What “Pine” Cones Reveal About the Evolution of Flowers

New research published this week in the Proceedings of the National Academy of Sciences provides new insights into their genetic origin, an evolutionary innovation that quickly gave rise to many diverse flowering plants more than 130 million years ago. Moreover, a flower with genetic programming similar to a water lily may have started it all.

“Water lilies and avocado flowers are essentially ‘genetic fossils’ still carrying genetic instructions that would have allowed the transformation of gymnosperm cones into flowers,” said biologist Doug Soltis, co-lead researcher at the University of Florida in Gainesville.

Gymnosperms are a group of seed-bearing plants that include conifers and cycads that produce “cones” as reproductive structures, one example being the well-known pine cone. “We show how the first flowering plants evolved from pre-existing genetic programs found in gymnosperm cones and then developed into the diversity of flowering plants we see today,” he said. “A genetic program in the gymnosperm cone was modified to make the first flower.” 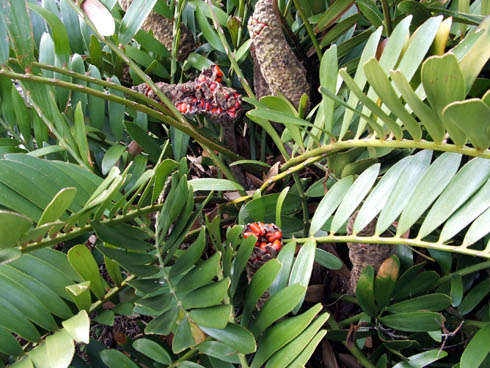 But, herein is the riddle. How can flowers that contain both male and female parts develop from plants that produce cones when individual cones are either male or female? The solution, say researchers, is that a male gymnosperm cone has almost everything a flower has in terms of its genetic wiring.

A non-flowering seed plant, a cycad named Zamia, which makes pine cone-like structures instead of flowers, was also examined in the study.

“We extracted an essential genetic material, RNA, from the flowers’ specific floral organs and in the case of Zamia, its cones, to see which genes were active,” said co-lead investigator Pam Soltis, a curator at the Florida Museum of Natural History and an evolutionary geneticist at the University of Florida.

Persea americana (Avocado) flowers are said to essentially be "genetic fossils" still carrying genetic instructions that would have allowed the transformation of cones from non-flowering seed plants into flowers. Image credit: Andre Chanderbali, University of Florida

Researchers then compared the organs’ profiles to a range of species representing ancient and more recent lineages of flowering plants. “This comparison allowed us to see aspects of the floral genetic program that are shared with gymnosperms, where they came from and also which aspects are shared among different groups of flowering plants and which differ,” she explained.

The flowers of most angiosperms have four distinct organs: sepals, typically green; petals, typically colorful; stamens, male organs that produce pollen; and carpels, female organs that produce eggs. However, the flowers of more ancient lineages of angiosperms have organs that intergrade, or merge into one another through a gradual series of evolutionary reforms. For example, a stamen of a water lily produces pollen but it may also be petal-like and colorful and there is often no distinction between sepals and petals–instead, early flowers have organs called tepals.

The research team found a very significant degree of genetic overlap among intergrading floral organs in water lilies and avocado but less overlap in poppy and Arabidopsis. “In other words, the boundaries between the floral organs are not all that sharp in the early angiosperm groups-the organs are still being sorted out in a sense,” said Doug Soltis.

The finding challenged researcher expectations that each floral organ in early angiosperms would have a unique set of genetic instructions as is the case in the evolutionarily derived Arabidopsis. Instead, the finding increased the likelihood that a single male cone was responsible for the world’s first flowering plants owing to the elasticity of their genetic structure.

“In early flowers, a stamen is not much different genetically speaking than a tepal,” said Doug Soltis. “The clearly distinct floral organs we all know and love today came later in flowering plant evolution–not immediately.”

Researchers say better understanding of these genetic switches in early angiosperm flowers could one day help scientists in other disciplines such as medicine or agriculture.

This project was conducted in collaboration with scientists at Penn State University, University at Buffalo, University of Georgia, and Fudan University in Shanghai, China. It was funded in part by the National Science Foundation’s Directorate of Biological Sciences.