What Bacteria Don’t Know Can Hurt Them

Many infections, even those caused by antibiotic-sensitive bacteria, resist treatment.  This paradox has vexed physicians for decades, and makes some infections impossible to cure.

A key cause of this resistance is that bacteria become starved for nutrients during infection.  Starved bacteria resist killing by nearly every type of antibiotic, even ones they have never been exposed to before.

What produces starvation-induced antibiotic resistance, and how can it be overcome?  In a paper appearing this week in Science, researchers report some surprising answers.

“Bacteria become starved when they exhaust nutrient supplies in the body, or if they live clustered together in groups known as biofilms,” said the lead author of the paper, Dr. Dao Nguyen, an assistant professor of medicine at McGill University. 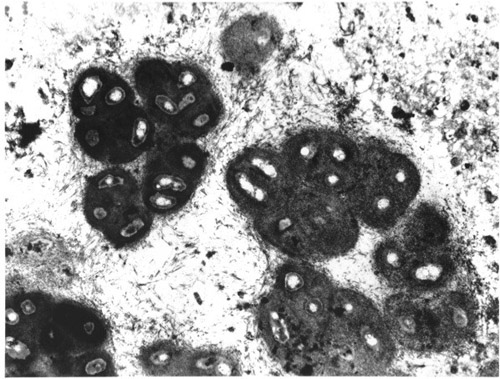 Bacterial clusters living in the lungs of a cystic fibrosis patient are highly resistant to killing by antibiotics. Image credit: Singh lab

Biofilms are clusters of bacteria encased in a slimy coating, and can be found both in the natural environment as well as in human tissues where they cause disease.  For example, biofilm bacteria grow in the scabs of chronic wounds, and the lungs of patients with cystic fibrosis.  Bacteria in biofilms tolerate high levels of antibiotics without being killed.

“A chief cause of the resistance of biofilms is that bacteria on the outside of the clusters have the first shot at the nutrients that diffuse in,” said Dr. Pradeep Singh, associate professor of medicine and microbiology at the University of Washington, the senior author of the study.  “This produces starvation of the bacteria inside clusters, and severe resistance to killing.” 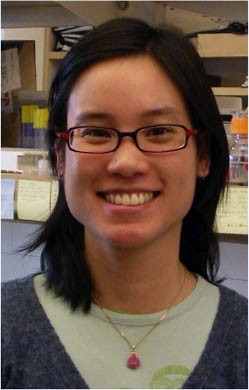 Starvation was previously thought to produce resistance because most antibiotics target cellular functions needed for growth. When starved cells stop growing, these targets are no longer active. This effect could reduce the effectiveness of many drugs.

“While this idea is appealing, it presents a major dilemma,” Nguyen noted.  “Sensitizing starved bacteria to antibiotics could require stimulating their growth, and this could be dangerous during human infections.”

Nguyen and Singh explored an alternative mechanism.  Microbiologists have long known that when bacteria sense that their nutrient supply is running low, they issue a chemical alarm signal.  The alarm tells the bacteria to adjust their metabolism to prepare for starvation.  Could this alarm also turn on functions that produce antibiotic resistance?

To test this idea, the team engineered bacteria in which the starvation alarm was inactivated, and then measured antibiotic resistance in experimental conditions in which bacteria were starved.  To their amazement, bacteria unable to sense starvation were thousands of times more sensitive to killing than those that could, even though starvation arrested growth and the activity of antibiotic targets.

“That experiment was a turning point,” Singh said.  “It told us that the resistance of starved bacteria was an active response that could be blocked.  It also indicated that starvation-induced protection only occurred if bacteria were aware that nutrients were running low.”

With the exciting result in hand, the researchers turned to two key questions.  First does the starvation alarm produce resistance during actual infections?  To test this the team examined naturally starved bacteria, biofilms, isolates taken from patients, and bacterial infections in mice.  Sure enough, in all cases the bacteria unable to sense starvation were far easier to kill. 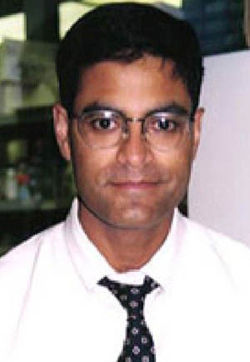 The second question was about the mechanism of the effect.  How does starvation sensing produce such profound antibiotic resistance?  Again, the results were surprising.

Instead of well-described resistance mechanisms, like pumps that expel antibiotics from bacterial cells, the researchers found that the bacteria’s protective mechanism defended them against toxic forms of oxygen, called radicals. This mechanism jibes with new findings showing that antibiotics kill by generating these toxic radicals.

The findings suggest new approaches to improve treatment for a wide range of infections.

“Discovering new antibiotics has been challenging,” Nguyen said.  “One way to improve infection treatment is to make the drugs we already have work better.  Our experiments suggest that antibiotic efficacy could be increased by disrupting key bacterial functions that have no obvious connection to antibiotic activity.”

The work also highlights the critical advantage of being able to sense environmental conditions, even for single-celled organisms like bacteria. Cells unaware of their starvation were not protected, even though they ran out of nutrients and stopped growth. This proves again that, even for bacteria, “what you don’t know can hurt you.”

The Burroughs Welcome Fund, the Cystic Fibrosis Foundation, the National Institutes of Health, and the Canadian Institutes for Health Research supported this research.

The results are contained in the Science article, “Active starvation responses mediate antibiotic tolerance in biofilms and nutrient-limited bacteria.”

In addition to Nguyen and Singh, the researchers on the study were Amruta Joshi-Datar, Elizabeth Bauerle, Karlyn Beer, and Richard Siehnel of the Departments of Medicine and of Microbiology at the UW, James Schafhauser of McGill University, Francois Lepine of INRS Armand Frappier in Canada, Oyebode Olakanmi and Bradley E. Britigan of the University of Cincinnati, and Yun Wang of Northwestern University.