What a difference a 3-D makes

When Gauge fell from a rooftop a few months ago, he had two strikes against him:

• The ground was five stories down

Rushed to the University of Minnesota Veterinary Medical Center, Gauge looked like a goner. Even after his internal injuries were tended to, his fractured pelvis loomed like a third strike that would hobble him for life. That’s what it’s like for too many animals, whose veterinary surgeons have only conventional X-rays or a stack of two-dimensional CT scans to guide them as they go into surgery. 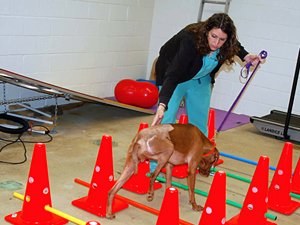 But Gauge was lucky. The U’s was one of only a handful of U.S. veterinary hospitals to have a “64-slice” 3-D CT scanner. It produced an image of the dog’s pelvis that could be rotated on a screen to show every crack and break—a godsend to Gauge’s surgeon, Kristina Kiefer.

“If we had gone with just X-rays, we would have been presented with new problems at the time of surgery,” says Kiefer, a resident in the College of Veterinary Medicine. “There were fractures in Gauge’s case that didn’t show up in the standard X-ray. But having the 3-D image allowed us to identify the fractures and have a better idea how we could reconstruct the site we were going into, which was the pelvic region, and communicate with the owner what the prognosis was and what to expect in terms of therapy and recovery.”

The 3-D scanner operates much like a conventional one, says radiologist Dan Feeney, a professor of veterinary clinical sciences. The patient is moved through the X-ray tube as it rotates, scanning in spiral fashion. In one short pass around a patient, it yields 64 slices only half a millimeter thick. A computer then transforms the data into one 3-D image.

“We got a complete picture of the hip region in five or six regions,” says Feeney. Many patients are dogs that have swallowed strange foreign objects. But even with them, the scanner also may pick up unexpected complications.

“One case was about one of those shish kabob pieces of wood,” he says. “We assumed the dog had eaten it, but it had penetrated his stomach, and he presented with abdominal and chest problems. It had migrated into his chest. The surgeon removed it, and the dog was fine. We’ve had a couple of cases like that.” (Note: No scans have yet found homework inside a dog.)

Sometimes, the 3-D scanner turns up complete surprises. “In one, we happened to find an anatomic anomaly that’s been reported in the literature,” Kiefer recalls. “I showed students what a normal [circulatory] system looks like, and then what this dog’s looked like. It was a good learning tool.” The unorthodox plumbing caused the dog no problem; it was in for an unrelated spinal problem.

When the Veterinary Hospital acquired the scanner, only the U and Oregon State had them for veterinary purposes. Now, says Feeney, several more institutions have them, and more are sure to follow. The U’s sees use every day, and is proving that its worth goes beyond the expected.

One big new application, he says, is in staging a cancer patient’s disease.

“If there is a mass in the lungs, {we ask if] the patients also have masses that have spread elsewhere, such as to the abdomen or leg,” Feeney says. “So we do a whole lot of body scans.

“I think this makes a big difference in how we can manage our patients and provide additional information to surgeon, oncologists, and other medical people,” he says. “As we evolve in the diagnostic techniques we do, we learn more applications for the technology.”