Wave of the future: Terahertz chips a new way of seeing through matter

Electromagnetic pulses lasting one millionth of a millionth of a second may hold the key to advances in medical imaging, communications and drug development. But the pulses, called terahertz waves, have long required elaborate and expensive equipment to use.

Now, researchers at Princeton University have drastically shrunk much of that equipment: moving from a tabletop setup with lasers and mirrors to a pair of microchips small enough to fit on a fingertip.

In two articles recently published in the IEEE Journal of Solid State Circuits, the researchers describe one microchip that can generate terahertz waves, and a second chip that can capture and read intricate details of these waves.

“The system is realized in the same silicon chip technology that powers all modern electronic devices from smartphones to tablets, and therefore costs only a few dollars to make on a large scale” said lead researcher Kaushik Sengupta, a Princeton assistant professor of electrical engineering. 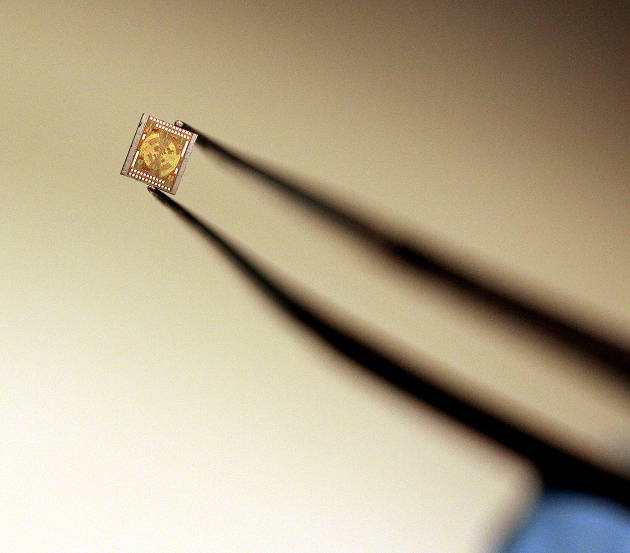 Princeton University researchers have drastically shrunk the equipment for producing terahertz — important electromagnetic pulses lasting one millionth of a millionth of a second — from a tabletop setup with lasers and mirrors to a pair of microchips small enough to fit on a fingertip (above). The simpler, cheaper generation of terahertz has potential for advances in medical imaging, communications and drug development. (Photo by Frank Wojciechowski for the Office of Engineering Communications)

Terahertz waves are part of the electromagnetic spectrum — the broad class of waves that includes radio, X-rays and visible light — and sit between the microwave and infrared light wavebands. The waves have some unique characteristics that make them interesting to science. For one, they pass through most non-conducting material, so they could be used to peer through clothing or boxes for security purposes, and because they have less energy than X-rays, they don’t damage human tissue or DNA.

Terahertz waves also interact in distinct ways with different chemicals, so they can be used to characterize specific substances. Known as spectroscopy, the ability to use light waves to analyze material is one of the most promising — and the most challenging — applications of terahertz technology, Sengupta said.

To do it, scientists shine a broad range of terahertz waves on a target then observe how the waves change after interacting with it. The human eye performs a similar type of spectroscopy with visible light — we see a leaf as green because light in the green light frequency bounces off the chlorophyll-laden leaf.

The challenge has been that generating a broad range of terahertz waves and interpreting their interaction with a target requires a complex array of equipment such as bulky terahertz generators or ultrafast lasers. The equipment’s size and expense make the technology impractical for most applications. 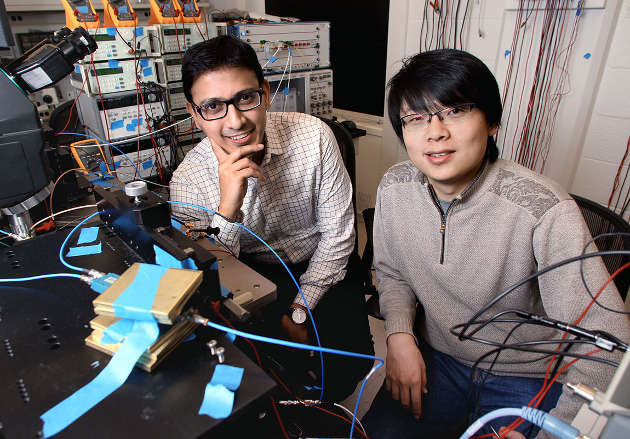 In two recently published articles, researchers Kaushik Sengupta (left), an assistant professor of electrical engineering, and Xue Wu (right), a Princeton graduate student in electrical engineering, describe one microchip that can generate terahertz waves, and a second chip that can capture and read intricate details of these waves. Terahertz waves sit between the microwave and infrared light wavebands on the electromagnetic spectrum and have unique characteristics, such as the ability to pass through most non-conducting material such as clothing or boxes without damaging human tissue or DNA. (Photo by Frank Wojciechowski for the Office of Engineering Communications)

Researchers have been working for years to simplify these systems. In September, Sengupta’s team reported a way to reduce the size of the terahertz generator and the apparatus that interprets the returning waves to a millimeter-sized chip. The solution lies in re-imaging how an antenna functions. When terahertz waves interact with a metal structure inside the chip, they create a complex distribution of electromagnetic fields that are unique to the incident signal. Typically, these subtle fields are ignored, but the researchers realized that they could read the patterns as a sort of signature to identify the waves. The entire process can be accomplished with tiny devices inside the microchip that read terahertz waves.

“Instead of directly reading the waves, we are interpreting the patterns created by the waves,” Sengupta said. “It is somewhat like looking for a pattern of raindrops by the ripples they make in a pond.”

Daniel Mittleman, a professor of engineering at Brown University, said the development was “a very innovative piece of work, and it potentially has a lot of impact.” Mittleman, who is the vice chair of the International Society for Infrared Millimeter and Terahertz Waves, said scientists still have work to do before the terahertz band can begin to be used in everyday devices, but the developments are promising.

“It is a very big puzzle with many pieces, and this is just one, but it is a very important one,” said Mittleman, who is familiar with the work but had no role in it.

On the terahertz-generation end, much of the challenge is creating a wide range of wavelengths within the terahertz band, particularly in a microchip. The researchers realized they could overcome the problem by generating multiple wavelengths on the chip. They then used precise timing to combine these wavelengths and create very sharp terahertz pulses.

“What can you do with a billion transistors operating at terahertz frequencies?” Sengupta asked. “Only by re-imagining these complex electromagnetic interactions from fundamental principles can we invent game-changing new technology.”

The paper “On-chip THz spectroscope exploiting electromagnetic scattering with multi-port antenna” was published Sept. 2, and the paper “Dynamic waveform shaping with picosecond time widths” was published Dec. 14, both by IEEE Journal of Solid State Circuits. The research was supported in part by the National Science Foundation‘s Division of Electrical, Communications and Cyber Systems (grant nos. ECCS-1408490 and ECCS-1509560).