WALL-E, meet EVA: ‘Robo-doc’ navigates on its own, frees doctors to focus on the critically ill

Ronald Reagan UCLA Medical Center, the world’s first hospital to introduce a remote-presence robot into its neurological intensive-care unit in 2005, now welcomes the RP-VITA, the first robot able to navigate the hospital on its own.

“During a stroke, the loss of a few minutes can mean the difference between preserving or losing brain function,” said Dr. Paul Vespa, director of neurocritical care at Ronald Reagan UCLA Medical Center and a professor of neurosurgery and neurology at the David Geffen School of Medicine at UCLA. “This new advance enables me to concentrate on caring for my patients without being distracted by the need to set up and manage its technological features.” 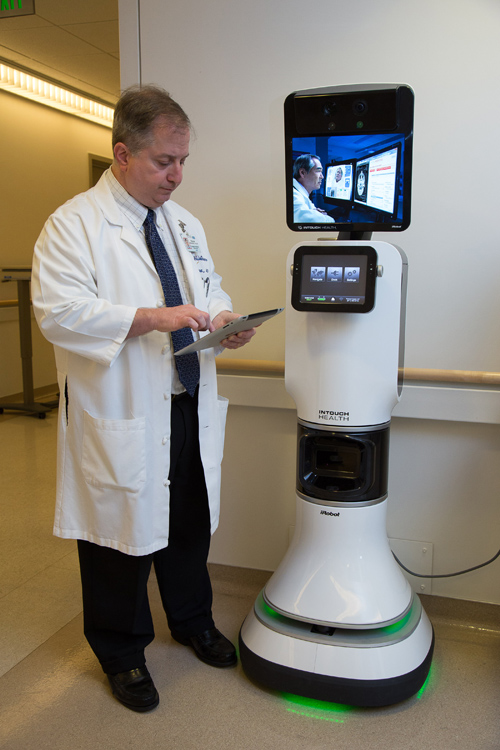 With a simple push of an iPad button, Vespa can send the robot gliding down the hall to a patient’s room. Equipped with 30 sensors that enable the it to “see” when its route is blocked by a gurney or curious bystander, EVA possesses the intelligence to self-correct and plot a detour to its destination.

After the robot reaches a patient’s bedside, Vespa can examine the patient in real time. A two-way video monitor in EVA’s “face” enables the patient and doctor to see and hear each other. A 120x zoom capacity allows Vespa to magnify a single word on the patient’s chart or zero in on the patient’s eyes to check for dilated pupils.

“The robot is the next best thing to having a doctor come and talk to you,” said Kevin Sittner, a former neuro-ICU patient at Ronald Reagan UCLA Medical Center. “You see each other’s faces, and it feels like you’re actually talking to the doctor. It was added comfort to me as a patient knowing I could get care whenever I needed it.” 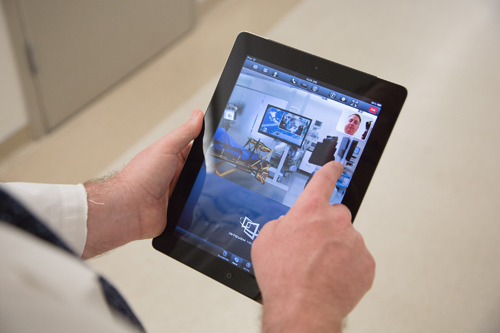 iPad for EVA Robot. Dr. Paul Vespa, director of neurocritical care at Ronald Reagan UCLA Medical Center and professor of neurosurgery and neurology at the David Geffen School of Medicine at UCLA, controls the robot through an iPad interface. (Photo credit: Reed Hutchinson/UCLA)

Jointly developed by InTouch Health and iRobotCorp, EVA’s software creates a map of the neuro-ICU floor that is integrated with hospital records, informing the robot where to go when a physician selects a patient on an iPad. Saved in EVA’s memory bank, the map constantly refreshes as patients are admitted and discharged.

In the neuro-ICU, where “time is brain,” EVA enables neurosurgeons and neurologists to connect with patients and their family members at a moment’s notice, regardless of where they are. The robot also allows specialists to offer lifesaving consultations on complex cases worldwide at hospitals without neurocritical-care expertise. Encrypted patient data and medical images are easily downloaded from a cloud-based network.