It’s not easy to catch an Egyptian vulture.

Evan Buechley knows. He’s hunkered down near garbage dumps from Ethiopia to Armenia, waiting for the highly intelligent birds to trigger a harmless trap. But no matter how well he and other researchers hid the traps, he says, “somehow the birds could always sense that something was up.”

Eventually Buechley, a postdoctoral scholar at the University of Utah and HawkWatch International, and his colleagues caught and tagged a total of 45 vultures from 2012-2016. The Egyptian Vulture is an endangered species, and by tracking them Buechley and colleagues were able to learn more about where they eat, breed and migrate.

These vultures migrated along the Red Sea Flyway — a large area connecting the summer and winter ranges of birds in Eastern Europe, Central Asia, the Middle East and Africa — and their travel routes revealed migratory bird corridors and bottlenecks. Identifying bottlenecks — i.e. places where birds concentrate on migration — helps bird conservationists know what areas to focus on and get the most bang for their buck, since a large percentage of a species’ population can pass through these small areas. 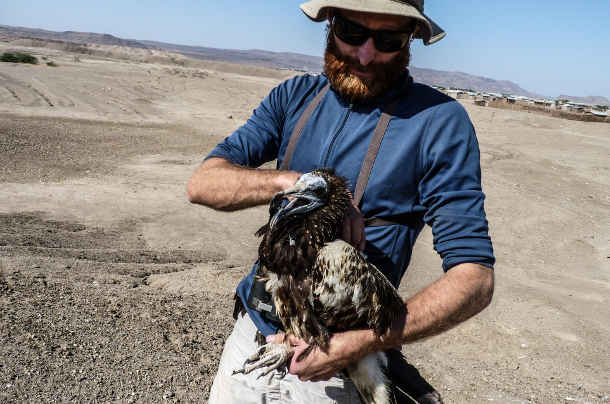 “The Red Sea Flyway connects birds from Eastern Europe, Central Asia, the Middle East — all those birds that migrate into Africa,” Buechley says. “But because of political instability in some countries and harsh desert environs throughout, it’s minimally studied. There’s not a lot of conservation happening. It’s a big research gap.”

Buechley and his international colleagues (see full list at bottom) published their results in two papers, one appearing in Biodiversity and Conservation on March 19, 2018, and another appearing in the Journal of Avian Biology.

The vultures are just one species out of around 35 large soaring bird species that migrate along the Red Sea Flyway. There are dozens more small birds that migrate here, as well. It’s the second-largest migratory flyway in the world, behind only the Americas Flyway, which connects North and South America.

On some flyways, migratory birds are funneled into narrow passageways over land due to geographic features, Buechley says. Large birds like Egyptian vultures need to glide to conserve energy. They use rising columns of thermal air to keep soaring without needing to constantly flap their 5.6 foot-wingspan (1.7 m) – a kind of avian cruise control. These thermals rarely exist over the ocean, so birds tend to hug coasts and mountain ridges.

That’s borne out in the flight paths Buechley and his colleagues reported. The main bottlenecks are the Bab-el-Mandeb Strait for southern-bound birds and the Suez Canal zone for northern-bound birds. The former is where the birds enter Africa from the Arabian Peninsula, by hopping over the narrow strait at the southern end of the Red Sea.

With the key bottlenecks identified, the researchers then looked at how well protected these areas were. Unfortunately, none of the areas within the most important bird bottlenecks receive any federal protection from the nations in which they sit, the analyses show. However, Important Bird and Biodiversity Areas(IBAs) — places recognized for their international importance for conservation— do overlap some of these areas and future work could focus at these sites. Steffen Oppel, a scientist who works in the global network of BirdLife International which is responsible for designating IBAs, says that recognizing the importance of such bottlenecks is vital to influence developments that may harm birds on migration. The Migratory Soaring Bird Sensitivity Tool allows developers of wind farms, for example, to assess how likely it is that their turbines may affect migrating birds.

Wind turbines are just one of the major hazards that vultures face along their journeys. Illegal shooting and poisoning is a concern throughout their ranges, Buechley says. Also, the birds rest on power distribution structures, which present the risk of collision and electrocution.

How we can help

Although the report seems dire, Buechley says there’s hope. The Africa side of the Bab-el-Mandeb Strait sits in the nation of Djibouti. “It’s bordered by Yemen and Somalia, but Djibouti is a safe and stable country,” he says. “And that’s where the bottleneck is. The most important place for the birds is actually a place where researchers and conservationists can work.”

Buechley and his colleagues hope to begin monitoring raptor migration at the Bab-el-Mandeb Strait to gain a better understanding of how many birds, apart from vultures, use that flyway. “It’s a transition from identifying these places to researching in depth, and ultimately working to protect, the most critical ones,” Buechley says. Bird conservationists have their sights set on Turkey, Armenia and Ethiopia as well.

This work was financially supported by the LIFE+ project “The Return of the Neophron” (LIFE10 NAT/BG/000152) funded by the European Union and co-funded by the AG Leventis Foundation and MAVA, the US National Science Foundation, the Christensen Fund, National Geographic Society, the Whitley Fund for Nature, Faruk Yalçın Zoo and KuzeyDoğa’s donors (in particular Bilge Bahar, Devrim Celal, Seha İşmen, Lin Lougheed, Burak Över and Batubay Özkan).

The full studies can be found here and here.