Just when we thought we were getting closer to understanding tropical forests’ tremendously valuable service of sucking carbon from the air and socking it away in tree trunks and other biomass, along comes a new variable: woody vines.

Technically called lianas, these long, climbing plants — think Tarzan’s treetop transportation — have been having a (literally) growing presence in tropical forests in recent decades, increasing in number and bulk while constraining tree growth and even killing trees by their tangling, strangling presence. Because lianas have a higher leaf-to-stem ratio than trees, scientists have suspected the trend is reducing forests’ ability to store carbon for the long term, since leaves tend to die and decompose far more quickly than bark and wood. But there has been little experimental confirmation of that conjecture, which is tremendously important in understanding the accumulation of planet-warming carbon dioxide, since tropical forests are responsible for nearly 40 percent of carbon storage worldwide. 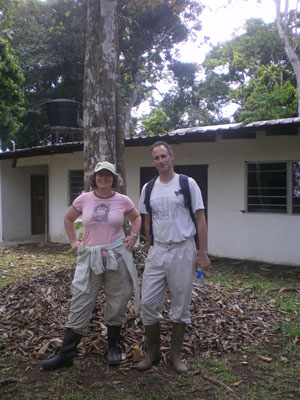 Now, a study published by College of Biological Sciences faculty member Jennifer Powers and colleagues Stefan Schnitzer from Marquette University and Geertje van de Heijden from University of Nottingham in the journal Proceedings of the National Academy of Sciences on October 12, 2015 has found that lianas do indeed reduce the carbon uptake capacity of tropical forests. Working in the Barro Colorado Nature Monument in Panama, Powers and colleagues removed lianas from eight of 16 large (80-meter-square) plots of tropical forest, then tracked how much above-ground biomass — wood, bark and leaves — accumulated in each plot over a period of three years. The researchers found that study plots with lianas accumulated 76 percent less biomass over the experimental period due to reduced tree growth and increased tree death. Extrapolating their results to tropical forests as a whole, the team calculated that lianas could potentially reduce long-term storage of carbon in tropical forests by one-third or more.

The study will be useful in guiding scientists working to predict the trajectory of carbon storage as atmospheric concentrations rise, and it may help explain recent observations that the carbon storage capacity of tropical forests is declining.

“This is the first time the effect of lianas on carbon cycling has been shown in such detail and on a large scale,” Powers says. “It suggests that over the decades to come, lianas could increasingly suppress the ability of tropical forests to sequester carbon.”