PROVIDENCE, R.I. and WEST LAFAYETTE, Ind. — A new study may finally explain why some landslides travel much greater distances than scientists would normally expect. A team of researchers used a sophisticated computer model to show that vibrations generated by large slides can cause tons of rock to flow like a fluid, enabling the rocks to rumble across vast distances.

The research, by geoscientists at Brown University, Purdue University and the University of Southern California, is described in the Journal of Geophysical Research: Earth Surface.

The “runout” distance of most landslides – the distance debris travels once it reaches flat land – tends to be about twice the vertical distance that the slide falls. So if a slide breaks loose a half-mile vertically up a slope, it can be expected to run out about a mile. But “long-runout” landslides, also known as sturzstroms, are known to travel horizontal distances 10 to 20 times further than they fall, according to Brandon Johnson, an assistant professor of earth, environmental and planetary sciences at Brown and the new study’s lead author. 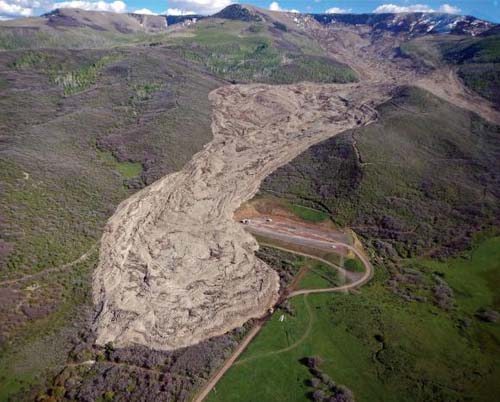 This 2014 landslide in Mesa County, Colorado contained 30 million cubic meters or rock and ran out for 2.8 miles. New research helps explain how these large slides are able to run out so far. Image credit: Jon White/Colorado Geological Survey

“There are a few examples where these slides have devastated towns, even when they were located at seemingly safe distances from a mountainside,” said Johnson, who started studying these slides as a student of Jay Melosh, distinguished professor of earth, atmospheric and planetary sciences and physics at Purdue University.

One such example was a slide in 1806 that slammed into the village of Goldau, Switzerland, and claimed nearly 500 lives.

“It has been known for more than a century that very large, dry landslides travel in a fluid-like manner, attaining speeds of more than 100 miles per hour, traveling tens to hundreds of kilometers from their sources and even climbing uphill as they overwhelm surprisingly large areas,” said Melosh, who was a part of the research team. “However, the mechanism by which these very dry piles of rock obtained their fluidity was a mystery.”

Scientists developed several initial hypotheses. Perhaps the slides were floating on a cushion of air, or perhaps they ran atop a layer of water or ice, which would lower the friction they encountered. But the fact that these types of landslides also occur on dry, airless bodies like the Moon cast doubt on those hypotheses.

In 1979, Melosh proposed a mechanism called “acoustic fluidization” to explain these long runouts. Slides of sufficient size, Melosh proposed, would generate vibrational waves that propagate through the rock debris. Those vibrations reduce the effect of friction acting on the slide, enabling it to travel further than smaller slides, which don’t generate as much vibration. The mechanism is similar to the way a car is more likely to slide if it’s bouncing down a bumpy road as opposed to rolling along a smooth one.

In 1995, Charles Campbell from the University of Southern California created a computer model that was able to replicate the behavior of long-runout slides using only the dynamic interactions between rocks. No special circumstances like water or air cushions were required. However, due to the limitations of computers at the time, he was unable to determine what mechanism was responsible for the behavior.

“The model showed that there was something about rocks, when you get a lot of them together, that causes them to slide out further than you expect,” Johnson said. “But it didn’t tell us what was actually happening to give us this lower friction.”

For this new study, Johnson was able to resurrect that model, tweak it a bit, and run it on a modern workstation to capture the dynamics in finer detail. The new model showed that, indeed, vibrations do reduce the effective friction acting on the slide.

Those results of the new model are consistent with the acoustic fluidization idea that Melosh had proposed nearly 40 years ago, before computer power was adequate to confirm it.

“Campbell and I had a long-standing friendly rivalry and he did not believe my proposed acoustic fluidization mechanism could possibly explain his findings in the simulations,” Melosh said. “As a result of Brandon’s careful analysis of the interactions of the rock fragments in the simulations, we’ve now put to rest the debate, and it was a lot of fun for the three of us to work together.”

Ultimately, the researchers hope this work might be a step toward better predicting these types of potentially devastating landslides.

“I would suggest that understanding why these landslides run out so far is really is a first step to understanding when and where they might occur in the future,” Johnson said. “Our work suggests that all you need is enough volume to get these long runouts. This leads to the somewhat unsatisfying conclusion that these slides can happen nearly anywhere.”

The results may also help scientists understand other types of events. For example, acoustic fluidization might play a role in slippage along fault lines, which contributes to large earthquakes.

“This emergent phenomenon, arising from the simple interactions of individual particles, is likely at play whenever large movements of rock occur,” Johnson said.

The research was supported in part by a grant from NASA, which supported Johnson’s graduate work.