Variety in Diet Can Hamper Microbial Diversity in the Gut

AUSTIN, Texas — Scientists from The University of Texas at Austin and five other institutions have discovered that the more diverse the diet of a fish, the less diverse are the microbes living in its gut. If the effect is confirmed in humans, it could mean that the combinations of foods people eat can influence the diversity of their gut microbes.

The research could have implications for how probiotics and diet are used to treat diseases associated with the bacteria in human digestive systems.

A large body of research has shown that the human microbiome, the collection of bacteria living in and on people’s bodies, can have a profound impact on human health. Low diversity of bacteria in the human gut has been linked to a plethora of diseases.

“There’s been a lot of work done showing that what people eat influences what gut microbes they have, and that can affect risk of obesity, diabetes, heart disease and other things,” said Daniel Bolnick, professor in The University of Texas at Austin’s College of Natural Sciences and lead author of the study, published in the journal Ecology Letters. 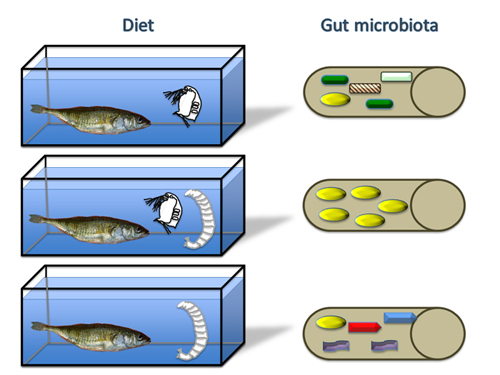 Fish that are picky eaters, focusing on just one type of food, such as small crustaceans (top) or chironomid insect larvae (bottom), have more diverse microbial communities in their intestines. In contrast, fish eating a more diverse mixture of foods have less diverse microbes in their intestine (middle). This is illustrated with a cartoon of multiple species of microbes (shaded shapes) inside the fish intestine (tan cylinders on right). Image credit: The University of Texas at Austin

Researchers have already established that environment and diet can affect the kinds of bacteria that live in the human digestive system. Unfortunately, most studies on the effect of diet on the microbiome only look at one thing at a time — such as a high-fat versus a low-fat diet.

Bolnick and his colleagues decided for the first time to look at the effect of combinations of different foods on gut bacteria. They used two species of fish, the threespine stickleback and the Eurasian perch, to model the human gut.

Populations of both fish were studied in the wild, where the fish typically dine on two major types of prey. The fish eat large insect larvae that live in the soil near the lakeshore, as well as small crustaceans that live in the open water far from shore. Because the individual fish vary in what they eat — some feasting mainly on insect larvae, others favoring the small crustaceans and the rest feeding on a varying mixture of the two — they proved to be perfect subjects for the study. 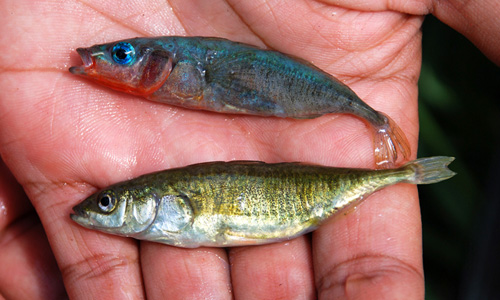 A pair of stickleback fish, a male (top) and a female (bottom). Image credit: The University of Texas at Austin

The scientists also manipulated the diet of a population of sticklebacks in the laboratory, feeding some frozen insect larvae, others tiny crustaceans, and a third group an equal mixture of the two foods.

The researchers expected that the generalists, the fish dining on the mixed diet, would have more diversity in their gut microbes than the fish that specialized in one type of prey. Because the mixed diet would expose the fish to a larger variety of microbes and their guts would hold a more diverse buffet for the microbes to munch on, it seemed a logical conclusion.

The researchers found the opposite to be true: The fish that favored one type of food item had more bacterial diversity in their guts than fish that ate a mixture of prey.

The authors have suggested some possible explanations for these results. It could be that the larger diversity of foods in the gut gave an advantage to some generalist bacteria, allowing them to thrive at the expense of more specialized bacteria. They found that one strain of bacteria dominated the guts of stickleback that ate a larger variety of prey, supporting this concept. Another possibility is that the prey items give off an inhibitory chemical that suppresses certain bacteria. If the fish ingest a variety of prey, and thus multiple inhibitors, then fewer gut microbes would survive. These hypotheses still need to be rigorously tested.

One thing is clear though. If these results translate to humans, then scientists may have to rethink how they study the effects of different foods on the human microbiome.

“Our results suggest that what we know about diet effects really has to change to account for mixing of things, because humans don’t eat just one thing at a time,” said Bolnick. “The effect of a mixed diet isn’t easily deduced from the two diets separately. The whole is less than the sum of its parts.”

This research was funded by the Howard Hughes Medical Institute, the David and Lucille Packard Foundation and the Swedish Research Council.