The machines are located in a laboratory on the fifth floor of the Molecular Foundry, a DOE Office of Science User Facility at Berkeley Lab. They make peptoids, which are synthetic versions of peptides. Nature uses peptides to build proteins, the workhorses of biology. Your body makes its own peptides to fight infections, and many antimicrobial drugs are based on peptides. 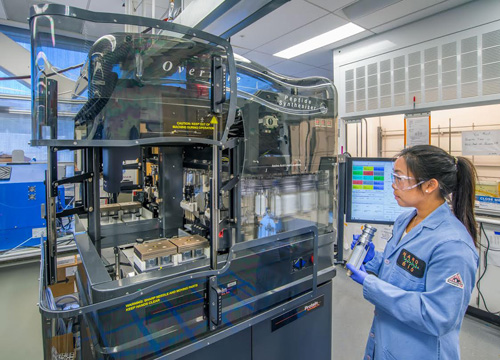 Jessica Su, a UC Berkeley student who worked at the Molecular Foundry with Ron Zuckermann, next to Overture, a robot that assembles dozens of custom peptoids at a time. Image credit: Berkeley Lab

Despite their potency, peptide-based antimicrobials can degrade quickly in the bloodstream, limiting their effectiveness. Peptoids, being synthetic, are much more durable, which is one of the reasons why researchers have explored their use as antimicrobials for the past several years.

Recently, scientists from Denmark’s Roskilde University used Symphony X and Overture to make dozens of peptoids that are designed to target bacteria. They created peptoids that mimic the structure and function of peptide-based antimicrobials. These drugs have an overall positive charge and water-repelling characteristics, two traits that enable them to disrupt a bacterium’s membrane and kill it. 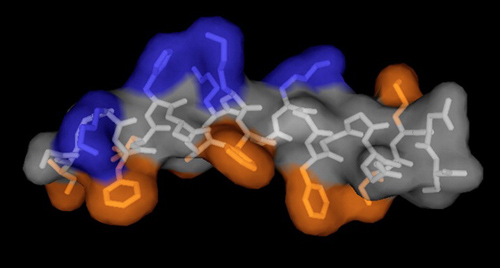 Peptoids are chainlike structure of non-natural amino acids that can be assembled to carry out very specific functions, such as fighting harmful microbes. (Image credit: Annelise Barron)

The trick was assembling a peptoid in which these traits are distributed throughout its structure in such a way that the peptoid is most effective at killing harmful bacteria without hurting other cells.

Often, such fine-tuning involves creating compounds one at a time and then testing them, a slow process with many dead-ends. Fortunately, Symphony X and Overture can churn out between 24 and 96 peptoids at a time. This means that many versions can be tested simultaneously.

“Peptoids are modular. We can control every position in their structure chemically and we can create peptoids with very specific traits and functions,” says Ron Zuckermann, who directs the Molecular Foundry’s Biological Nanostructures Facility and a pioneer of peptoid research.

“And because we can assemble many similar peptoids at the same time, we can test a hypothesis more thoroughly, in this case focusing on how to create peptoids that mimic antimicrobial peptides,” Zuckermann adds.

Using Symphony X and Overture, Biljana Mojsoska, a graduate student at Roskilde University, created a family of several dozen peptoids, each with a slightly different distribution of charge and water-repelling traits. Peptoids are composed of non-natural amino acids that are strung together in a chain. The peptoids in this research were about ten amino acids long.

After assembling the peptoids at the Molecular Foundry, Mojsoska and Prof. Havard Jenssen studied them in their lab in Denmark to determine which versions work best at killing bacteria while not hurting red blood cells. Two promising candidates rose to the top.

“This paper demonstrated the biological compatibility of peptoids compared to antimicrobial peptide analogs,” says Mojsoska. “Through various structural modifications, we were able to tune the structure of tryptophan and lysine-rich peptoids with regards to the hydrophobic content so that we could obtain antimicrobial peptoids with low toxicity profiles.”

Adds Zuckermann, “This is a great example of what the Molecular Foundry offers. One of our long-term goals is to build functional nanoscale structures that are shaped and act like biological structures, but are made of more rugged materials. In this case it’s antimicrobials, but it could be electrolytes for batteries, membranes for separations, or other applications.”

Next, Mojsoska and colleagues plan to investigate the peptoids’ mode of action against specific kinds of bacteria.

The research was funded by the Danish Council for Independent Research.