By examining the type of rock in which dinosaur fossils were embedded, an often unappreciated part of the remains, 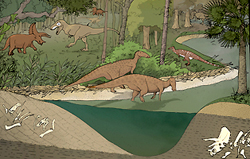 Hadrosaurs or duck-billed dinosaurs, along with the small ornithopod Thescelosaurus, preferred to live along the edge of rivers, according to the research. Ceratopsians, on the other hand, which include the well-known Triceratops, preferred to be several miles inland.

The findings, which appear in the online edition of the Proceedings of the Royal Society B, give scientists a more complete picture of the distribution of different species and help explain how several large herbivores managed to coexist.

Tyler Lyson of Yale University and the Marmarth Research Foundation, along with Yale researcher Nicholas Longrich, analyzed more than 300 fossils representing more than half a dozen dinosaur species from Western Canada, Montana, Wyoming and surrounding areas.

After several years of fieldwork, Lyson began to notice a pattern to the geographical distribution of different species. He and Longrich also searched through museum collections of fossils, some of which contained information about the type of rock in which the fossils were found, and some of which still had pieces of rock attached to them that were large enough for the researchers to recognize as either sandstone or mudstone.

“We’re using what paleontologists usually throw away when excavating the fossils as clues to where these different species spent most of their time,” Lyson said.

As the sole large carnivore in the region, Tyrannosaurs rex appears to have roamed both habitats, most likely feeding on large herbivores. However, the team discovered that hadrosaurs and Thescelosaurus fossils were more often found in sandstone, which occurs along riverbanks, whereas ceratopsians were likely to be embedded in mudstone from the floodplains.

“We didn’t really think about distribution between different species before now,” Longrich said. “But depending on what type of rock you look at, you get a very different picture of the community that lived there.”

The study also shows that the dinosaurs had specialized eating habits (something about which very little is known), and likely fed on different types of plants found in each environment, Longrich said.

“This opens up the possibility of finding new species if we search different types of rock,” Longrich said. “It also emphasizes the importance of recording data about the rock in which fossils are preserved, which can give us important clues as to the paleoecology of these animals.”