Open Yale Courses, which will be releasing another set of undergraduate courses this spring, has added a new dimension to its offering by engaging in a social networking pilot project with the website OpenStudy.

OpenStudy is designed to connect users in a study group that allows them to collaborate in real time on open content regardless of their location. For example, if a person viewing Yale economist Robert Shiller’s lecture on behavioral finance in Beijing is unclear on an issue, he can post his question to the course’s study group and receive assistance from a fellow Open Yale Courses user in São Paulo. 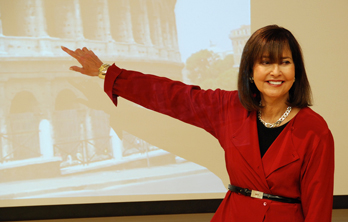 “Since we launched Open Yale Courses in the fall of 2007, we have wanted to give those taking the courses an opportunity to connect,” says Diana E.E. Kleiner, founding project director and principal investigator of Open Yale Courses. “We are always looking for ways to improve user experience and to maximize the benefits participants can derive from high-quality Yale academic content.

“This pilot with OpenStudy provides an interactive element to the Open Yale Courses experience, which we hope our users will find exciting,” she adds.

The four Open Yale Courses included in the initial phase of the pilot project are “Financial Markets” with Shiller, “Fundamentals of Physics” with Professor Ramamurti Shankar, “Introduction to Ancient Greek History” with Professor Donald Kagan and “Roman Architecture” with Kleiner. 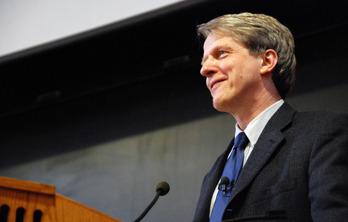 Through the pilot project, those following online Yale courses, such as Robert Shiller's 'Financial Markets,' can exchange ideas and offer assistance to one another. Image credit: Yale University

“While we are looking forward to the full results,” Kleiner adds, “we are particularly interested in seeing how individuals use the open study groups for the humanities courses, the first of their kind linked to the OpenStudy site. Since these courses do not have the problem sets and solutions that have thus far been the staple of most online study groups, it will be revealing to see what kinds of interactions can happen there.”

Visitors to Open Yale Courses (https://oyc.yale.edu) can take advantage of this pilot project with OpenStudy (https://openstudy.com). To offer feedback on the program, write to open.courses.support@yale.edu.