Scientists have long known that seawater contains small concentrations of valuable metals, but a technologically feasible extraction method has remained elusive. The University of Chicago’s Carter Abney, a graduate student in chemistry, has been developing materials called metal-organic frameworks to help address the problem.

“There’s a lot of really interesting chemistry you can do with these types of materials,” said Abney, who works in the research group of Wenbin Lin, the James Franck Professor in Chemistry.

This includes uranium extraction from seawater, as well as separating highly radioactive elements from nuclear waste, which expedites its decay to safer levels.

Abney, Lin and two co-authors presented the first application of MOFs as a means of extracting uranium from seawater in the April 2013 issue of Chemical Science. Abney’s contribution to that work has since earned a first-prize placement in the 2014 U.S. Department of Energy’s Innovations in Fuel Cycle Research Awards Competition.

Abney’s prize was one of 20 awarded this year for student publications and presentations relevant to the nuclear fuel cycle, which is the series of industrial processes required to produce energy from uranium in nuclear power reactors.

“Carter has done a fantastic job on his PhD thesis research and is highly deserving of this recognition,” Lin said. 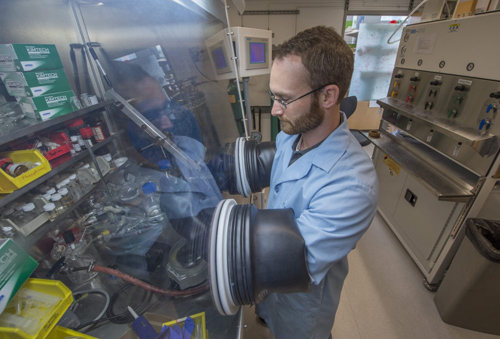 Carter Abney works in a glovebox in the Gordon Center for Integrative Science to handle chemicals that are sensitive to water and air. Abney, a graduate student in chemistry at the University of Chicago, has received a 2014 Innovations in Fuel Cycle Research Award for his work on metal-organic frameworks. Photo by Robert Kozloff

The 2013 Chemical Science paper also gained attention soon after publication from Chemical & Engineering News and from MIT Technology Review. The C&E News report included a positive evaluation of the research by MOF specialist Jeffrey Long, a professor of chemistry at the University of California, Berkeley. “This groundbreaking work provides an initial demonstration that MOFs could potentially even be of utility in the extraction of uranium from seawater,” Long told C&E News.

The energy implications of Abney’s research are significant. Today, the combustion of fossil fuels provides approximately 80 percent of the world’s energy needs, resulting in the release of carbon dioxide and greenhouse gases.

“It’s clear from a sustainability standpoint that we need to find different energy sources,” Abney said. The World Health Organization has estimated that pollution from fossil-fuel combustion contributes to approximately three million deaths annually. While improvements are being made on renewable resources such as solar and wind power, they generate power intermittently, need vast acreage for deployment and often require large amounts of precious metals.

“Nuclear is really the only option we have in terms of energy sources that are available in the near-term, that are mature technologies, that are reasonably sustainable and low carbon. While the general public may have an adverse, visceral response to nuclear power, it remains the safest and most environmentally responsible option for the near-term.”

This simplified illustration depicts the triangular pyramidal structure of a metal-organic framework binding pocket designed to collect uranium atoms. The framework is displayed both before (left) and after binding with the atom, represented here as an orange sphere. Such MOFs show promise for extracting uranium from seawater. Image courtesy of Carter Abney

Abney noted that while MOFs can help provide fuel for nuclear-powered reactors, they could also play an important role in radioactive waste disposal.

“On the front end we develop these metal-organic frameworks to pull uranium from seawater, providing another source for obtaining nuclear fuel,” he said. Seawater contains approximately a thousand times more uranium than terrestrial ores. “If you estimate that there’s approximately 100 years of terrestrial uranium remaining, you’ve extended nuclear-power capabilities for several generations beyond that.”

On the back end of nuclear power generation, materials prepared from MOF precursors can help remove minor actinides during waste processing. These are the highly radioactive elements other than uranium and plutonium that occur in relatively low concentrations. The radioactivity of the waste solution would be dramatically reduced and decay to safe levels more quickly if the minor actinides could be separated from the other elements in nuclear waste.

“You essentially consolidate the radioactivity into a condensed and stable form, which is more amenable to long term storage and disposal than liquid waste,” Abney said.

Structurally speaking, MOFs consist of metal connecting points that are linked by organic bridging ligands. Abney likens the connecting points to marshmallows, and the links between them to spaghetti noodles. The result is a crystalline material with high porosity and surface area that can be designed for a variety of applications, including drug delivery, catalysis and gas separation and storage.

Abney and his fellow team members noticed that enzymes and proteins can have an unusual affinity for specific molecules. They suspected that they could use the three-dimensional structure of the metal-organic frameworks to produce a binding pocket similar to those of the enzymes or proteins. They could then create a more efficient, lightweight version of a molecule that mimics the structure and function of the protein or enzyme.

MOFs are many times lighter than proteins, while still capable of achieving similar local structure. A protein that absorbs one uranium atom extracts less than one-tenth of one percent of its final mass. A MOF cage offers similar three-dimensional connectivity as the protein, but weighs around 100 times less and may have multiple binding sites. The MOFs reported in this study absorbed slightly more than 20 percent of their mass in uranium.

“You’ve increased your efficiency significantly while preserving the three-dimensional environment for binding that metal,” Abney said. Further, that three-dimensional connectivity presents options for selectively binding the metal of interest, which is essential when there are competing metals as in seawater or nuclear waste.