When Gang Ren whirls the controls of his cryo-electron microscope, he compares it to fine-tuning the gearshift and brakes of a racing bicycle. But this machine at the U.S. Department of Energy (DOE)’s Lawrence Berkeley National Laboratory (Berkeley Lab) is a bit more complex. It costs nearly $1.5 million, operates at the frigid temperature of liquid nitrogen, and it is allowing scientists to see what no one has seen before.

At the Molecular Foundry, Berkeley Lab’s acclaimed nanotechnology research center, Ren has pushed his Zeiss Libra 120 Cryo-Tem microscope to resolutions never envisioned by its German manufacturers, producing detailed snapshots of individual molecules. Today, he and his colleague Lei Zhang are reporting the first 3-D images of an individual protein ever obtained with enough clarity to determine its structure.

Scientists routinely create models of proteins using X-ray diffraction, nuclear magnetic resonance, and conventional cryo-electron microscope (cryoEM) imaging. But these models require computer “averaging” of data from analysis of thousands, or even millions of like molecules, because it is so difficult to resolve the features of a single particle. Ren and Zhang have done just that, generating detailed models using electron microscopic images of a single protein.

He calls his technique “individual-particle electron tomography,” or IPET. The work is described in the January 24 issue of PLoS One, the open-source scientific journal, in an article entitled “IPET and FETR: Experimental Approach for Studying Molecular Structure Dynamics by Cryo-Electron Tomography of a Single-Molecule Structure.”

3-D images from a single particle (A) a series of images of an ApoA-1 protein particle, taken from different angles as indicated. A succession of four computer enhancements (projections) clarifies the signal. In the right column is the 3-D image compiled from the clarified data. B) is a close-up of the reconstructed 3-D image. C) Analysis shows how the particle structure is formed by three ApoA-1 proteins (red, green, blue noodle-like models). Image credit: Berkeley Lab

The 3-D images reported in the paper include those of a single IgG antibody and apolipoprotein A-1 (ApoA-1), a protein involved in human metabolism. Ren’s goal is to produce individual 3-D images of medically significant proteins, such as HDL— the heart-protective “good cholesterol” whose structure has eluded the efforts of legions of scientists armed with far more powerful protein modeling tools. “We are well on our way,” says Ren.

Ren has the credentials of one who knows what he can do. He was recruited to work at Berkeley Lab in August 2010 from the University of California at San Francisco, where he had used a cryo-electron microscope and more conventional averaging techniques to discern the 3-D structure of LDL – the “bad cholesterol” thought to be a major risk factor for heart disease.

His images of single proteins are a bit fuzzy, even after they are cleaned up by complex computer filtering, but very informative to the trained observer. These individual particles are extraordinarily tiny, requiring Ren to zero in on a spot of less than 20 nanometers. He has reported protein images as small as 70 kDa. That’s kilodaltons, a Lilliputian scale (expressed in units of mass) set aside for taking the measure of atoms, molecules, and snippets of DNA. It’s a more useful way to size soft objects like proteins that can be clumped, stringy, or floppy.

Unlike the sculptural images of protein models, a suite of these photographs can convey a sense of these particles in all their nanoscale floppiness. Within the complex structure of these proteins lies the secrets of their function, and perhaps keys to drugs that block the bad ones and promote the good ones. With some additional computer filtering, a high-contrast model of protein can be generated from the images and animated to show its moving parts in 3-D. 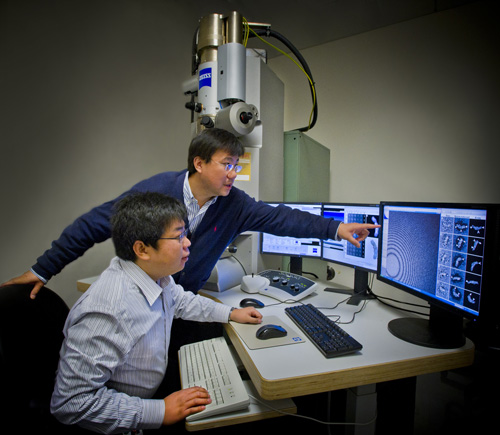 “This allows you to see the personality of each protein,’’ says Ren. “It is a proof of concept for something that people thought was impossible.”

By observing the structure of single proteins, it is possible to understand their flexible, moving parts. “This opens a door for the study of protein dynamics,” Ren says. “Antibodies, for example, are not solid. They are very flexible, very dynamic.”

How did Ren coax so much versatility out of his Libra 120? “It’s not a very high-end model,’’ he concedes. Much has to do with the accessories he bolts on to the machine, and with his own artistry and patience. He’s equipped the microscope with a $300,000 CCD camera, some powerful image-processing software, special contrasting agents, and a device called an “energy filter” that sifts through the digitized camera data and culls weak signals. Thoroughly familiar with his customized machine, he also employs an element of elbow grease, working long hours to draw out the powerful images from a torrent of digital noise.

About the video: A computer animation demonstrates the flexible dynamics — the moving parts — of human IgG antibody. 3-D images of two individual antibody particles (gray) were generated using EM tomography with IPET. The demonstration shows how the same molecular chains (red, orange, and green noodle-like models) of antibody particle #1 can fit precisely into particle #2, which was found under the microscope in an entirely different pose. Credit:  Berkeley Lab

Electron microscopes focus streams of electrons rather than light to see incredibly tiny things. The short wavelength of an electron beam enables much higher resolution and magnification than visible light. Powerful electron microscopes have been used for decades to probe materials at atomic-scale; and right next door to the Molecular Foundry is Berkeley Lab’s National Center for Electron Microscopy, which houses the most powerful microscopes in the world. The TEAM 0.5 microscope can distinguish objects as small as the radius of a hydrogen atom. But these heavyweight microscopes pull off this atomic-scale resolution with pulses of energy that would obliterate most soft biological proteins. The high power electron microscopes are used primarily for probing atomic structure of strong, solid materials, such as graphene — a lattice of carbon only one atom thick.

Ren’s lab specializes in cryoEM, which examines objects frozen at -180 °C (-292 °F). A bath of liquid nitrogen flash-freezes samples so quickly that no ice crystals form. “It is amorphous, like glass,’’ Ren says. The protein samples are frozen on a disk the size of baby’s fingernail, filled with tiny wells 2 microns across. The disk is inserted into the microscope on a rotating support that can tilt the sample up to 140° inside a vacuum — sufficient camera angles to produce a 3-D perspective. “The challenge is to isolate it from the air, and to turn it without vibrations, even the vibrations from the bubbling of liquid nitrogen,’’ says Ren.

The extremely low temperature fixes the samples and prevents them from drying out in the vacuum needed for the electron scan. It creates conditions favorable for imaging at much lower doses of electrons — low enough to keep a single soft protein intact while more than 100 images are taken over a one-to-two hour period.

The work was supported by the U.S. Department of Energy Office of Science, Office of Basic Energy Sciences (contract no.DE-AC02-05CH11231)