UN strategy for eliminating HIV in sub-Saharan Africa is unfeasible, according to UCLA study

Effective care and prevention strategies have managed to reduce the spread of HIV in the U.S. and other resource-rich countries. But in sub-Saharan Africa, where more than 25 million are infected, the epidemic rages — as does the debate over how to stop it.

The World Health Organization and UNAIDS have proposed using “treatment as prevention” to eliminate HIV in sub-Saharan Africa. The strategy would treat people infected with HIV to reduce their ability to infect others as a way to prevent them from transmitting the infection. UNAIDS has set goals to diagnose 90 percent of HIV-infected people and to treat 90 percent of those diagnosed individuals by 2020.

But a new study by UCLA researchers concludes that although the plan sounds laudable, implementing it might not be feasible. 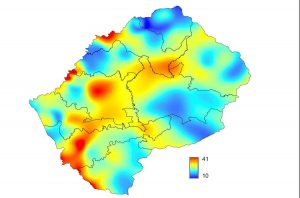 UCLA researchers created a predictive map of the population density of adults in Lesotho who have HIV. Densities range from 10 percent (blue) to 41 percent (red). Image Courtesy of Sally Blower (Click image to enlarge)

The authors used statistical mapping techniques to identify the location of all people who are HIV-infected in Lesotho, a landlocked country within South Africa in which about 1 in 4 adults is infected with the virus. Currently, many of these people have not been diagnosed with HIV and are not receiving treatment. The researchers used their map to design and evaluate HIV elimination strategies. They found that the strategy proposed by the WHO and UNAIDS is unlikely to be feasible because HIV-infected adults are widely dispersed throughout the country and only a minority live in urban centers.

“Global health policies for HIV elimination need to be redesigned, and they need to consider settlement patterns and population density,” said Sally Blower, director of UCLA’s Center for Biomedical Modeling. “Our results show that the spatial demographics of populations in predominantly rural countries in sub-Saharan Africa will significantly hinder, and may even prevent, the elimination of HIV.”

The study was published March 29 in the journal Science Translational Medicine.

“The HIV epidemic in Lesotho is hidden,” said Justin Okano, a co-author of the study and a statistician in Blower’s research group. “Nobody knows where the vast majority of HIV-infected people live. To find them, it would be necessary to test everyone in the country, which would be extremely expensive and very difficult.”

To reveal the hidden epidemic, Blower’s team combined datasets from multiple sources, including settlement patterns and geographic variation in population density. Using HIV testing data from approximately 7,000 people in Lesotho, the researchers created a map predicting where every person infected with HIV in the country lives, whether they have been diagnosed or not.

“We estimate that almost every settlement in the country has at least one HIV-infected person, and this holds true for even the smallest and most remote settlement,” said Brian Coburn, the study’s other co-author, who was a postdoctoral fellow in Blower’s group. “We also found that approximately 70 percent of HIV-infected adults live in rural settlements.”

The researchers concluded that the UNAIDS elimination plan would not be feasible in Lesotho. They calculated that implementing the plan would require finding and treating a very large number of people in remote areas where there are only two or fewer infected people per square kilometer.

Blower and colleagues also used their map to design an alternative strategy for eliminating HIV that, in contrast to the current strategy, maximizes the efficiency of resource utilization. They took into account settlement patterns, population density and the spatial diffusion of the epidemic. Their strategy minimizes the area in Lesotho that needs to be covered to find and treat people infected with HIV.

Although the paper’s conclusions might be controversial, Blower said, the goal of the study was to present a new way of thinking about how to eliminate HIV in sub-Saharan Africa.

“To develop effective strategies, we need to figure out — throughout entire countries — where HIV-infected individuals live and which communities are connected to each other,” Blower said. “A spatial map can provide all kinds of insight.”

African governments should decide on which elimination strategy they use, Blower said, but global health policies and recommendations should be revised in light of the new data.