There are some 10 billion hardware devices connected to the Internet today. By 2020, this Internet of Things will power over 50 billion connected cars, dog collars, toothbrushes and pretty much anything else you can imagine.

But while it’s now easier than ever for people to use or even create new software, innovative hardware design has remained a distant frontier, accessible only to trained engineers and the most diehard of soldering gun-slinging hobbyists.

As connected devices march toward ubiquity, a small vanguard of technologists, like Joachim Horn, founder of London-based startup SAM Labs, is working to democratize their future. Horn contends that it will take creators with a greater range of diverse perspectives to realize the full potential of the Internet of Things.

His goal is to put the future of the Internet of Things in more people’s hands – literally. SAM Labs’ construction kits consist of wireless building blocks that empower budding inventors, from seven-year-olds to seniors, to create just about anything they can imagine.

“We’re making every piece of tech into a plaything,” said Horn from the SAM Labs offices in London.

“Not only are there no wires, but there are no circuit boards or coding. You turn it on and start creating. We’re leveling the playing field to empower kids, designers, startups or anyone else who wants to build an Internet of Things device and never thought they could.”

In many ways, Horn has been preparing to create SAM Labs for a decade or more. “I always saw technology as an amazing enabler to creativity,” he said. As a high school student, he built theater stage components that lit up in reaction to audience response. He also taught youth groups how to build basic electronics, such as a rainwater tank that notified homeowners when it was full.

At Imperial College in London, Horn found that university-level engineers were narrowly focused on problems of optimization and variables. Only after collaborating with an electronics engineer and a biomedical engineer to design and produce a gaming platform to help children with cerebral palsy did Horn’s vision start to crystalize.

“It’s not just non-techies who benefit from simplification of engineering processes. Engineers also learn from an infusion of outside perspectives,” he said. 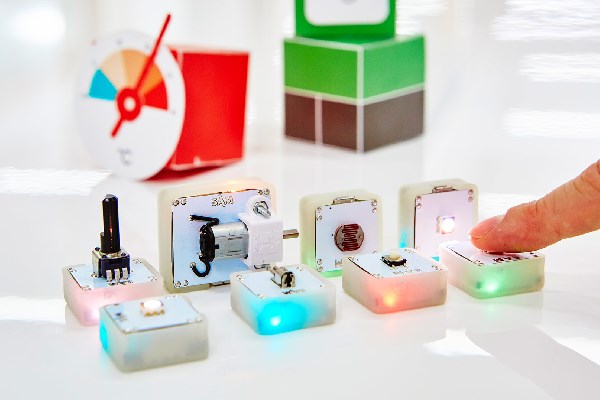 Horn created the Imperial College Design Collective to bring together engineers, designers and others from a broad variety of backgrounds. He said, “Engineers need to incorporate human-oriented design into every aspect of their work. That helps them to apply their skills across areas and stay creative for their entire careers.”

After graduation, Horn helped to bring design into the engineering department at the Tokyo Institute of Technology. That design track still exists and has contributed to the creation of technologies used in the ongoing cleanup of the Fukushima nuclear disaster. The experience gave momentum to Horn’s vision and inspired him to try to apply it beyond the university setting.

He headed back to rainy London with a bright idea. There, Horn founded SAM Labs (named for his brother Sam), aiming “to make electronics simple enough for anyone to be creative with them or use in an educational way. We wanted to remove all entry barriers.”

London was a natural home base. Horn had many contacts there from the design collective, and calls the city “the heart of an amazing mix of hackers, universities, grass-roots technologists, designers, artists – and, of course, it’s one of the world’s great financial centers.” He organized a core team that put their heads together, participated in a few hackathons and, by March of 2014, SAM Labs had their first prototype.

The small, sleek blocks contained in each SAM Labs kit communicate with each other via Bluetooth Low Energy. There are a variety of blocks including buttons, lights, sliders, servos, motors, and tilt and temperature sensors.

The SAM Labs software is an intuitive app that visually represents the physical blocks on the screen and allows users to drag and drop simple lines to connect them – no programming experience required.

Users can find ideas and inspiration from online tutorials and a community page that showcases devices created by others. They can also learn how to connect SAM blocks to third-party apps and the Internet. More experienced users are able to go beyond the simple drag-and-drop commands and write their own JavaScript code to take their inventions to the next level.

“The blocks can be used to build anything from small robots that teach about AI, to wireless cars that dodge obstacles, to bicycle jackets that signal upcoming turns,” Horn said. “And it’s all easily programmed with the SAM app.”

In a TED Talk, Horn likened the blocks to cooking ingredients – except these building blocks are the fundamental ingredients needed to cook up any Internet of Things device. The kit also has potential as a fun, interactive tool to teach both STEM (science, technology, engineering and math) and STEAM (STEM + Art) in the classroom.

Once they had the prototype, Horn and company started knocking on doors. They visited such universities as the Royal College of Art and received positive feedback. People were validating their idea – but SAM Labs’ ambitious vision still required scale, business development and tech infrastructure.

By chance, Horn walked by an innovation event at Imperial College and met a representative from the Microsoft Accelerator in London. Horn built an immediate rapport with the accelerator team. They described an environment of best-practice sharing among fast-growing startups.

“It felt like a breath of fresh air,” he said. “I’d been alone with my idea for so long and was excited to hear about a place to go and be amongst other people who were in similar situations.”

SAM Labs applied to the Microsoft Accelerator London in June of 2014. Horn said, “I was stressed, because Internet of Things was a new-ish concept. Honestly, I didn’t know if they’d go for it or not.”

They did. Aya Zook, one of the Microsoft Accelerator leads, remembered, “We decided SAM Labs would be a compelling addition to our accelerator, as they have a great product, but they are also the whole package of where we feel tech should be going: touching lives, teaching and bringing more people into the conversation.”

Horn was impressed from day one that the relationship with the accelerator was based on mutual respect and learning together.

“They got what we were trying to do, where we were coming from and where we wanted to go,” he said. “They were able to really help us to tailor our message and position ourselves for an external audience.”

SAM Labs spread the word about their work at a Maker Faire event and through a Kickstarter campaign. The campaign stood out for its clear timeline for product development and delivery. It surpassed the fundraising target in 72 hours and went on to more than double the initial amount, earning over $200,000.

“Our accelerators use a non-dilution model, where we’re more interested in becoming a stakeholder, not a shareholder, while the startups build, grow and scale to maturity,” said Zook.

“We’re really thinking about their role in the tech world. We’re increasingly platform agnostic, and dynamic people like Joachim are the face of the entrepreneurs we want to grow with. They’re helping us fulfill our vision too.”

SAM Labs’ peer group in the accelerator included startups building apps for calendars, parking spaces and product photography. Horn sees being in a cohort of startups as one of the greatest advantages of participating in an accelerator. He still calls on those colleagues all the time, and feels that he can safely discuss ideas and share feedback.

“In the end, success is a team sport,” said Horn. “Most innovations occur from teams of like-minded people talking, exchanging ideas and working toward the same vision. Within an accelerator you have that coping mechanism, a peer group that helps everyone to grow.”

After the accelerator, SAM Labs was asked to do a collaboration with the London Science Museum. They created a four-piece SAM Science Museum Inventor kit – the startup’s first retail product. The kit found its way into hundreds of classrooms across the U.K. and drew substantial interest from the U.K. government and press.

Soon SAM Labs was selling the kits directly to consumers from their website, Amazon and selected retail outlets including the Science Museum, Selfridges department store and the Conran Shop.

SAM Labs kits are now used in schools across Europe. Students, without any prior coding experience, have built their own inventions, from self-driving rovers to wireless alarm systems.

Today, the startup’s 20 employees are based in an office at London’s Lime Wharf. They host special workshops for schools, families, inventors and artists at their offices, sharing the message that anyone with a good idea can make innovations and inventions happen.

As the momentum builds, Horn has also had the opportunity to present at SXSW Interactive in Austin, Texas, pitch the Duke of York and personally give a SAM Labs kit to Microsoft CEO Satya Nadella.

“No matter where we are in this process, our goal is still the same: to bring all sorts of thinkers and doers into the Internet of Things conversation,” Horn said.

“We want people to express themselves in a creative, almost musical way, whether they’re building a skateboard that records and posts tricks to social media or a smart system that monitors your cat and feeds it when it’s hungry.”