GAINESVILLE, Fla. — Red imported fire ant invasions around the globe in recent years can now be traced to the southern U.S., where the nuisance insect gained a foothold in the 1930s, new University of Florida research has found.

Native to South America, the ant had been contained there and in the southeastern U.S. before turning up in faraway places in the last 20 years — including California, China, Taiwan, Australia and New Zealand.

The study in Friday’s edition of Science was co-authored by Marina Ascunce, a postdoctoral associate with the Florida Museum of Natural History on the UF campus and Chin-Cheng Yang of National Taiwan University.

The team’s findings could prove helpful in finding new ways to control the invasive species, Solenopsis invicta, Ascunce said. Americans spend more than $6 billion a year to control the ants and offset damage they cause, including medical expenses and $750 million in agricultural losses.

GAINESVILLE, Fla. — The fire ant Solenopsis invicta has plagued the southern U.S. since its unintentional introduction to the area in the 1930s. The fire ants pictured above were photographed outside Dickinson Hall on the University of Florida campus Feb. 16, 2011. Photo by Jeff Gage/Florida Museum of Natural History

“Fire ants are very annoying pests, and they cause people to suffer,” Ascunce said. “People who are allergic can die (from ant stings).”

Red imported fire ants are highly aggressive. They have a painful sting, often discovered by humans only after stepping on a mound.

The research team used several types of molecular genetic markers to trace the origins of ants in nine locations where recent invasions occurred. They traced all but one of the invasions to the southern U.S. The exception was an instance where the ants moved from the southeastern U.S. to California, then to Taiwan.

Ascunce said the scientists were surprised by the findings.

“I thought that at least one of the populations in the newly invaded areas would have come from South America, but all of the genetic data suggest the most likely source in virtually every case was the southern U.S.,” she said. 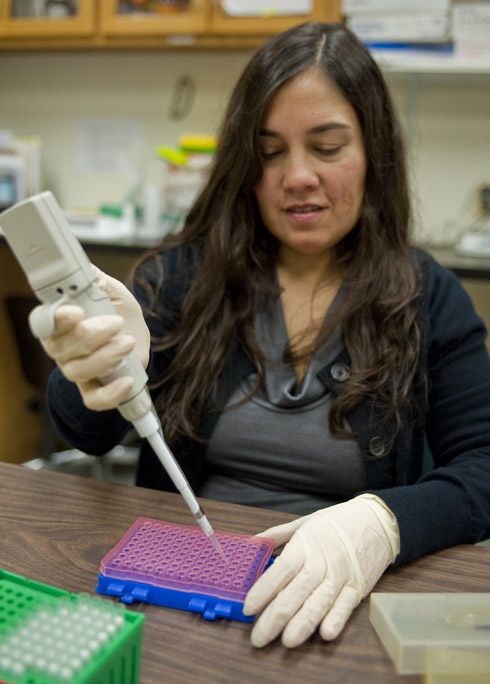 GAINESVILLE, Fla. — Marina Ascunce prepares to perform a polymerase chain reaction procedure, which produces millions of copies of a specific DNA sequence in a short amount of time. Ascunce is co-author of a University of Florieda study on the invasive red fire ant published in Science Feb. 25, 2011. Photo by Jeff Gage/Florida Museum of Natural History

The study results show the problematic side of a robust global trade and travel network.

DeWayne Shoemaker, a U.S. Department of Agriculture scientist affiliated with UF’s Institute of Food and Agricultural Sciences who was senior author and lead investigator on the grant that funded the study, said pinning down precise origins for the ants is a huge win because it helps scientists know where to look to find the most effective biological control agents, such as phorid flies.

Since the late 1990s, scientists have been releasing phorid flies to help control the ants while reducing use of pesticides. The flies hover over mounds before injecting an egg into an ant. When the egg hatches, the maggot develops in the ant’s head, eventually decapitating it. The maggot turns into a fly and the cycle repeats.

GAINESVILLE, Fla. — In this photo from Feb. 16, 2011, UF researcher Marina Ascunce examines a 96-well plate, a tool used in the process of sequencing DNA. The genetic makeup of the invasive red fire ant Solenopsis invicta pinpointed the southern U.S. as the source of most invasions into other parts of the world in the past 20 years. Photo by Jeff Gage/Florida Museum of Natural History

Shoemaker, a key member of the research team that sequenced the complete genome of the red imported fire ant earlier this year, said the team collected ants from 2,144 colonies at 75 geographic sites. From there, they used multiple genetic tests—including some similar to human paternity tests — to determine the ants’ origin with high confidence levels.

“I really think our power to distinguish … hinged on us having such a large data set,” he said. “I don’t think we’d have had the statistical power to come up with these kinds of conclusions otherwise. All of these conclusions are highly supported by data.”

It is widely believed the red imported fire ant first entered the U.S. in the 1930s through the port of Mobile, Ala., on cargo ships, possibly in dirt used as ballast.

Other team members included Cheng-Jen Shih and Wen-Jer Wu, both of National Taiwan University; Jane Oakey of Biosecurity Queensland, Australia; Luis Calcaterra of the USDA-ARS South American Biological Control Laboratory in Argentina; Jérôme Goudet, of the University of Lausanne in Switzerland and Kenneth Ross of the University of Georgia.