GAINESVILLE, Fla. — University of Florida researchers have described a new species of land crab that documents the first crab extinction during the human era.

The loss of the crab likely greatly impacted the ecology of the Hawaiian Islands, as land crabs are major predators, control litter decomposition and help in nutrient cycling and seed dispersal. Their disappearance was caused by the arrival of humans to the islands and resulted in large-scale changes in the state’s ecosystem. Researchers said the full impact of the extinction on Hawaii is unknown, but they are certain it led to changes in the diversity of the food web, a continuing concern to conservationists studying species loss in other habitats. The study will be published online May 16 in PLoS ONE.

“If these land crabs were alive today, Hawaii would be a very different place,” said lead author Gustav Paulay, marine malacology curator at the Florida Museum of Natural History on the UF campus. “They certainly were major ecological players, as they were very abundant, large, carnivorous omnivores.”

Numerous fossils of the new species, Geograpsus severnsi, have been found on the major Hawaiian Islands for many years, but its identity was not clear. Researchers identified the crab by comparing physical characteristics with specimens from various collections. The species is unique to the Hawaiian Islands and the most land-adapted crab in the Pacific, expanding further inland and to higher elevations than any other. Like other island land crabs, G. severnsi appears to have retained ties to the sea, where its larvae developed. 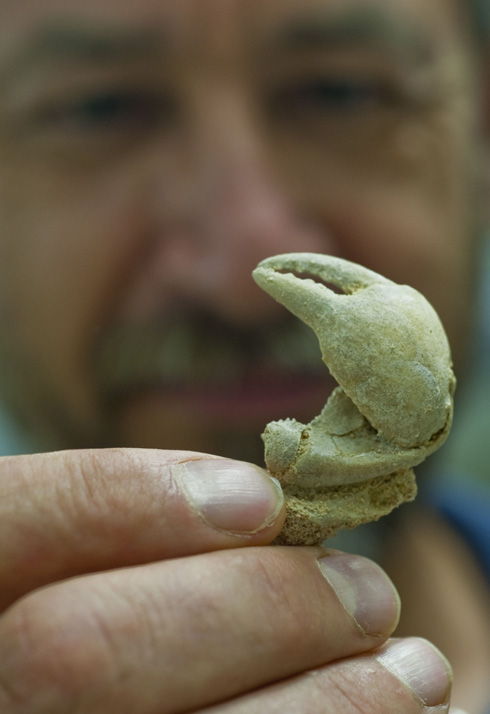 GAINESVILLE, Fla. — University of Florida researcher Gustav Paulay examines a fossil claw of the newly described land crab species Geograpsus severnsi found on the Hawaiian Island of Kauai. Paulay, malacology curator at the Florida Museum of Natural History on the UF campus, is lead author of a study published in PLoS ONE May 16, 2011, showing the species disappeared from Hawaii soon after Polynesians colonized the islands about 1,000 years ago. Photo by: Jeff Gage/Florida Museum of Natural History

“When people arrive on an island, initially it’s like the Garden of Eden – few people and lots of resources,” Paulay said. “I can imagine a period when humans and the introduced rats, dogs and pigs would have preyed heavily on the crabs, especially during their mass migrations to release larvae in the ocean.”

The sister species to G. severnsi, Geograpsus grayi, still lives on many Pacific Islands, so researchers can only speculate the exact cause of the extinction of G. severnsi, whose fossils are common on Hawaii, Maui, Oahu and Kauai. Oceanic land crabs occupy nearly all tropical islands, but many in the Pacific appear to be in decline from different causes. 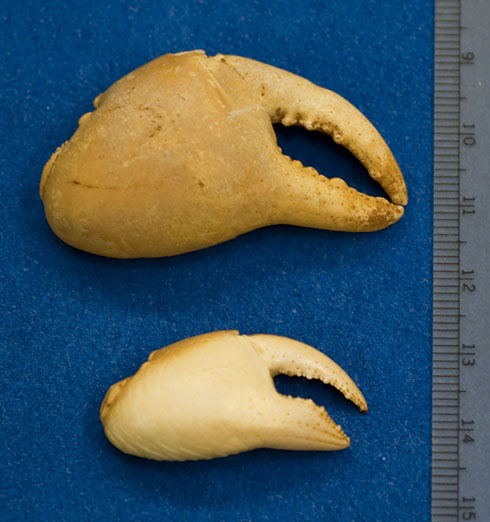 GAINESVILLE, Fla. — A fossilized claw of the newly described crab species Geograpsus severnsi, top, pictured with a claw of its sister species, Geograpsus grayi. While G. grayi is still widespread on the Pacific Islands, G. severnsi – the largest species in its genus – became extinct soon after the Polynesians colonized the Hawaiian Islands about 1,000 years ago. Gustav Paulay, malacology curator at the Florida Museum of Natural History on the University of Florida campus, is lead author of a study published in PLoS ONE May 16, 2011, describing the new species. Photo by: Jeff Gage/Florida Museum of Natural History

“Islands have a limited habitat area, so that makes organisms on them inherently vulnerable,” Paulay said. “Because islands are isolated, major groups of species, like mammals or ants can be absent. Thus, island species evolve in their absence and often can’t cope when such continental predators are introduced.”

As important predators of invertebrates, plants and even nesting sea birds, land crabs probably affected the establishment and shaped the evolution of many species on the islands, Paulay said. Geograpsus severnsi was the largest species of this carnivorous genus.

“A study like this can reveal what the structure of the natural ecosystem was before these human-caused ecological changes, and that’s very important for moving forward with conservation,” said Helen James, curator of birds at the Smithsonian Institution’s National Museum of Natural History. “It highlights the complexity of the ecological changes that took place on the Hawaiian Islands and their severity in causing the extinction of a land crab.”

One example of how crabs affect the ecology of islands can be seen on Christmas Island in the Indian Ocean, where the invasive yellow crazy ant is destroying crab populations of a different species of land crab.

“The loss of this crab from areas has led to change in the structure of the forest because the crabs controlled litter and ate the seedlings of weeds,” Paulay said. “We don’t know the full ecological impact of all these land crabs, but we know that on islands, it’s usually substantial.”

Because oceanic islands have never been connected to a landmass, species establishment is based entirely on dispersal, a process that likely allowed land crabs to spread more easily because they have a marine larval stage in their development. For terrestrial organisms, arrival is usually less likely so there are missing organisms and altered ecological conditions.