GAINESVILLE, Fla. — Researchers from the University of Florida and six other institutions have unlocked some of the key foundations for the evolution of seed and flowering plants.

The study, to be published online Sunday in Nature, is the first to identify the occurrence of ancient genome duplication events and show the genomes of seed and flowering plants duplicated before each group of plants diversified. It introduces new factors for further molecular research on the organisms humans depend on for food, clothing and shelter.

Analyses of several hundred genes pinpointed ancient genome duplication events at about 319 million years ago for seed plants and 192 million years ago for flowering plants, making their origins older than previously estimated. Genome duplications result in organisms having twice as much DNA and an extra copy of every gene, allowing for greater genetic variation. For flowering plants, this event is now linked to their rise to success and the more than 300,000 flowering plant species alive today.

“These two big genome duplication events may have actually spurred really important evolutionary innovations,” said study co-author Pam Soltis, curator of molecular systematics and evolutionary genetics at the Florida Museum of Natural Historyon the UF campus. “The evolution of life on our planet changed dramatically with the origin of the seed, and then it changed dramatically again with the origin of the flower. The whole terrestrial landscape changed with the evolution of these two different groups, as different animal groups arose and interacted with these plants.” 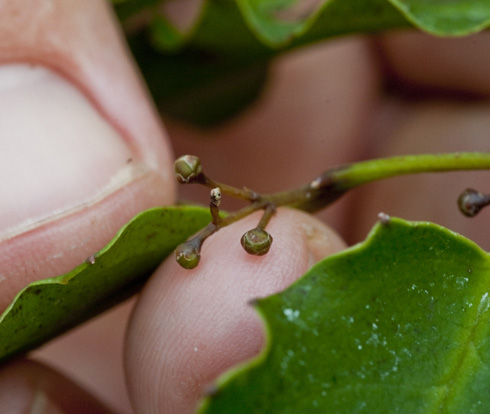 This Amborella trichopoda plant in the Florida Museum of Natural History greenhouse is the single living sister species to all other flowering plants. In a study published online in Nature April 10, 2011, genes from the plant were used to calculate when ancient genome duplication events occurred. Photo taken in September 2010. Image credit: Jeff Gage/University of Florida

Researchers analyzed genes from papaya, rice, poplar, grape and cucumber plants, as well as those from the base of the evolutionary tree of flowering plants, including water lily, pine tree and spruce tree; several of the species had completely sequenced genomes.

“One ancient genome duplication event led to all the diversity of flowering plants that you see today,” said study co-author Doug Soltis, a distinguished professor in UF’s biology department and researcher in the UF Genetics Institute. “You’re taking all the genes that you can study in living plants and reconstructing what the genome history was, and you can see that all the genomes were duplicated. This discovery ties genome doubling to why angiosperms (flowering plants) took off and were successful.” 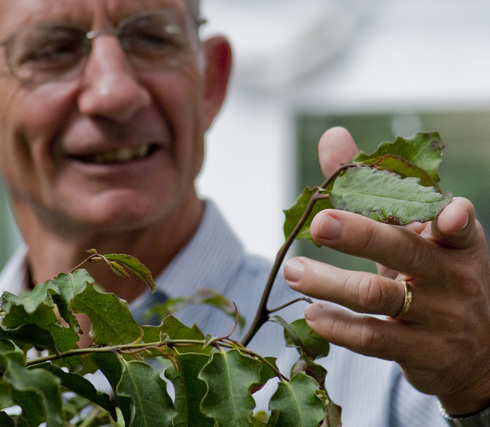 Doug Soltis, University of Florida distinguished professor of biology, examines an Amborella trichopoda plant in the Florida Museum of Natural History greenhouse in this photo taken in September 2010. Genes from the Amborella plant were used in a new study published online in Nature April 10, 2011 to determine when ancient genome duplication events occurred. Image credit: Jeff Gage/University of Florida

The study helps set the stage for understanding the genome structure of all the seed plants and all the flowering plants, Pam Soltis said. Every seed and flowering plant will have some signature of this duplication event, which will have to be taken into consideration when trying to determine a genome’s major elements.

“By showing the evolutionary history of all these genome duplications, it helps us understand modern genome complexity,” said Jonathan Wendel, professor and chairman of the department of ecology, evolution, and organismal biology at Iowa State University. “This was the first study that really showed the two really ancient duplications in a robust way.”

A duplication event was calculated for each of about 800 genes analyzed in the study, and the results were almost identical in each of those genes, Pam Soltis said. The researchers have been generating sequence data for the project for nearly 10 years.

“It’s difficult to figure out what happened when you’re dealing with things that old – evolution tends to wipe out some footprints, so the signal gets a little messier and harder to distinguish from noise,” Wendel said. “They used some really robust, huge data sets and robust analysis to see through all that noise and find the signal.” 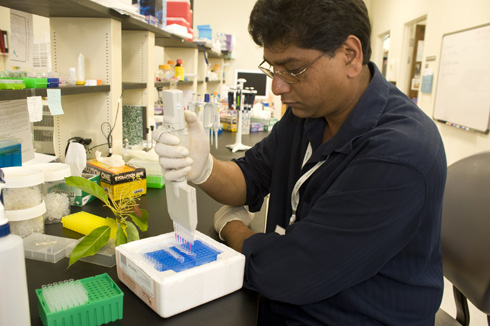 “The further we push back the date of when these events happened, the more confidently we can claim that, not most, but all flowering plants are the result of large-scale duplications of genetic code,” said Claude dePamphilis, a professor of biology at The Pennsylvania State University and lead author of the study. “It’s possible that the important polyploidy events we’ve identified were the equivalent of two ‘big bangs’ for flowering plants.”

The study resulted from the Ancestral Angiosperm Genome Project and was funded primarily by the National Science Foundation. Study co-authors include Yuannian Jiao, Norman Wickett, Lena Landherr, Paula Ralph, Lynn Tomsho, Yi Hu, Stephan Schuster and Hong Ma of The Pennsylvania State University, Saravanaray Ayyampalayam and Jim Leebens-Mack of the University of Georgia, Andre Chanderbali of the University of Florida, Sandra Clifton of Washington University and Scott Schlarbaum of The University of Tennessee.