GAINESVILLE, Fla. — A new University of Florida study of 45-million-year-old pollen from Pine Island west of Fort Myers has led to a new understanding of the state’s geologic history, showing Florida could be 10 million to 15 million years older than previously believed.

The discovery of land in Florida during the early Eocene opens the possibility for researchers to explore the existence of land animals at that time, including their adaptation, evolution and dispersal until the present.

Florida Museum of Natural History vertebrate paleontologist Jonathan Bloch, who was not involved in the current study, said he is especially interested in the finding and future related research.

“As a paleontologist who studies the evolution of mammals, my first question is ‘OK, if there was land here at that time, what kinds of animals lived here?’ ” Bloch said. “Most of our current understanding of the evolution of early mammals comes from fossils discovered out west.”

The study in the current issue of the journal Palynology by David Jarzen, a research scientist at the Florida Museum of Natural History on the UF campus, determined sediment collected from a deep injection well contained local, land-based pollen, disproving the popular belief Florida was underwater 45 million years ago during the early Eocene.

This image shows three grains of pollen recovered from an injection well on Pine Island, Fla., photographed through a microscope. From left: marine microplanton, shows parts of Florida were submerged during the early Eocene; Liliacidites, a genus of pollen from an angiosperm frequently found in dry and warm-temperate regions; and Lisianthius, a genus found throughout the neotropics today in herbs, shrubs and small trees. Image by: David Jarzen and Kristen Grace, Florida Museum of Natural History/UF

“When I got the sample, I could actually break it apart with my fingers,” Jarzen said. “It wasn’t just land, it was low-lying land with boggy conditions and near shore because it showed marine influence.”

Until recently, Florida was believed to have been submerged until the Oligocene epoch, 23 million to 34 million years ago, Jarzen said. The 2010 study of the Pine Island sample from the Oldsmar Formation dates Florida’s land from the early Eocene, about 10 million to 15 million years earlier than determined in a 2006 study of pollen and invertebrate fossils from the Avon Park Formation in west central Florida by Jarzen and former Florida Museum scientist David Dilcher.

“What we thought we knew was an incomplete body of information,” said Fredrick Rich, a professor of geology in the department of geology and geography at Georgia Southern University. “Those terrestrial trees, shrubs and herbs didn’t live out there all by themselves. I envision a small key, or maybe several small keys just like the islands in Florida Bay.

The study appears in the December 2010 edition of the bi-annual journal, which was distributed in January.

The sample of dark gray lignitic clay and limestone contained pollen from 17 different flowering plants, representing the earliest report of land vegetation to date. It was collected in 2004 by study co-author Curtis Klug, a hydrogeologist with Cardno Entrix, a Fort Myers-based natural resource management and environmental consulting company. 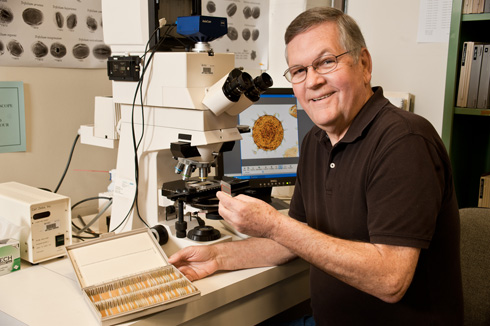 David Jarzen, a research scientist at the Florida Museum of Natural History on the UF campus,, examines pollen recovered from an injection well 767 meters below the surface of Pine Island, Fla. The 45-million-year-old sample contains the oldest land-based plants found in Florida to date. The study is published in the current issue of the journal Palynology. Photo by: Florida Museum of Natural History/UF photo by Kristen Grace

“As we’re drilling through the rock and the cuttings come to the surface, we collect them, examine them, and determine the type of rock and its estimated age,” Klug said. “As we were drilling, we did go through several lignites, but this was one of the thickest ones we found in this particular well.”

The company was digging a 767-meter well for the Greater Pine Island Water Association, a company that uses reverse osmosis to produce drinking water. In this case, the well was used to dispose of excess saline brine, Klug said.

Lignite, also known as brown coal, is geologically younger than higher-grade coals and contains decomposed organic matter, largely plant material from wetlands. Along with the 17 land-based pollens, which included species of trees, palms and possibly ferns representing a climate similar to the panhandle today, the sample also contained at least four examples of marine phytoplankton. The presence of limestone and foraminiferas, single-celled organisms found in all marine environments, indicates the rise and fall of the area’s sea level.

“Depending upon the anticipated uses of future injection wells, the developers might find it very interesting to know that what they will drill into is not likely to be simple and homogeneous,” Rich said. “There is a buried landscape down there and the engineers need to know that is the case.”

Klug said the age of the sample was determined by analyzing the foraminiferas’ carbonate shells and comparing the layer to sediments recovered from the same depth. “I think it’s really very interesting,” Klug said. “It’s a preliminary study but what it shows I think is that the information is available for anybody who’s willing to spend the time looking into it.”

Pine Island was the site of a Calusa Indian village for more than 1,500 years and is important for research in archaeology and ecology. The Florida Museum maintains the Randell Research Center at Pineland, an archaeological site on the northwest part of the island.

“Our studies of environmental change at Pineland show that while sea level is rising very quickly today, water levels fluctuated up and down when the Calusa inhabited the area from AD 1 to 1700,” said William Marquardt, Randell Center director and curator of archaeology at the Florida Museum. “Jarzen and Klug’s new findings from the Eocene epoch may be suggesting something similar 35 million years ago – that there were fluctuations during the Eocene that periodically exposed land in Florida.”