A biological sensor is a critical part of a human cell’s control system that is able to trigger a number of cell activities. A type of sensor known as the “gating ring” can open a channel that allows a flow of potassium ions through the cell’s wall or membrane — similar to the way a subway turnstile allows people into a station. This flow of ions, in turn, is involved in the regulation of crucial bodily activities like blood pressure, insulin secretion and brain signaling.

But the biophysical functioning of the gating ring sensor has not been clearly understood. Now, UCLA researchers have uncovered for the first time the sensor’s molecular mechanism, shedding new light on the complexity of cells’ control systems.

The findings, published in the June 10 issue of the Journal of Biological Chemistry and featured as a “Paper of the Week,” could lead to the development of specific therapies against diseases such as hypertension and genetic epilepsy.

Just as a smoke detector senses its environment and responds by emitting a sound signal, cells control their intracellular environment through molecular sensors that assess changes and trigger a response. 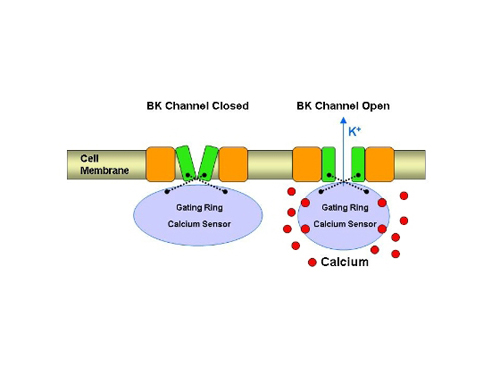 Illustration demonstrates how the BK channel sensor opens a gateway in the cell membrane to allow a flow of ions through the channel. Image credit: University of California.

In this case, when calcium ions bind to the gating ring — which constitutes the intracellular part of an ionic channel known as the BK channel — the cell responds by allowing the flow of potassium  ions across the cell membrane, with a wide range of consequences for the body.

BK channels are present in most cells in the body and regulate fundamental biological processes such as blood pressure, electrical signaling in the brain and nervous system, inner ear hair-tuning that impacts hearing, muscle contractions in the bladder, and insulin secretion from the pancreas, to name a few.

The UCLA researchers were able to identify for the first time how the gating ring is activated and how it rearranges itself to open the gateway that the ions flow through. Using state-of-the-art electrophysiological, biochemical and spectroscopic techniques in the laboratory, the team demonstrated that when calcium ions bind to the gating ring, its structure changes — that is, it converts the chemical energy of the calcium binding into mechanical work that facilitates the opening of the BK channel.

“We were able to resolve the biophysical changes occurring in the sensor, under conditions resembling those present inside a living cell, so we believe that these transformations reflect the molecular events occurring when BK channels operate in the body,” said research team leader Riccardo Olcese, an associate professor in the department of anesthesiology’s division of molecular medicine and a member of both the Cardiovascular Research Laboratory and Brain Research Institute at the David Geffen School of Medicine at UCLA.

“This is an exciting field of study and we hope that these findings will lead to a greater understanding of how this complex biological sensor operates,” said study author Anoosh D. Javaherian, a research associate in the department of anesthesiology’s division of molecular medicine division at the Geffen School of Medicine.

Javaherian added that only last year were the structures involved in the BK sensor even identified. This is the first study to demonstrate its function.

Since the BK channel and its sensor are involved in so many aspects of normal physiological function, researchers believe that it is likely the process could be implicated in many aspects of disease as well.

“This molecular and dynamic view of the BK intracellular sensor helps us understand how signaling molecules are sensed, providing new ideas on how to fight disease,” said Taleh Yusifov, a research associate in the department of anesthesiology’s division of molecular medicine at the Geffen School of Medicine.

For example, Yusifov noted, the malfunction of this BK channel’s sensor has been associated with genetic epilepsy.

The next step in the research will assess if the BK gating ring sensor and channel are involved in sensing small molecules — other than calcium ions — which also have great biological significance in the workings of the human body.

Other study authors include Antonios Pantazis and Sarah Franklin of the department of anesthesiology’s division of molecular medicine at the Geffen School of Medicine, and Chris S. Gandhi of the division of chemistry and chemical engineering at the California Institute of Technology in Pasadena, Calif.