While the demand for ever-smaller electronic devices has spurred the miniaturization of a variety of technologies, one area has lagged behind in this downsizing revolution: energy-storage units, such as batteries and capacitors.

Now, Richard Kaner, a member of the California NanoSystems Institute at UCLA and a professor of chemistry and biochemistry, and Maher El-Kady, a graduate student in Kaner’s laboratory, may have changed the game.

The UCLA researchers have developed a groundbreaking technique that uses a DVD burner to fabricate micro-scale graphene-based supercapacitors —  devices that can charge and discharge a hundred to a thousand times faster than standard batteries. These micro-supercapacitors, made from a one-atom–thick layer of graphitic carbon, can be easily manufactured and readily integrated into small devices such as next-generation pacemakers. 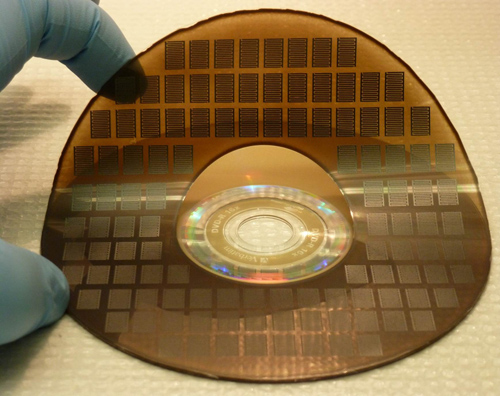 The new cost-effective fabrication method, described in a study published this week in the journal Nature Communications, holds promise for the mass production of these supercapacitors, which have the potential to transform electronics and other fields.

“The integration of energy-storage units with electronic circuits is challenging and often limits the miniaturization of the entire system,” said Kaner, who is also a professor of materials science and engineering at UCLA’s Henry Samueli School of Engineering and Applied Science. “This is because the necessary energy-storage components scale down poorly in size and are not well suited to the planar geometries of most integrated fabrication processes.” 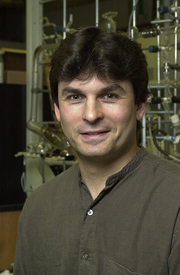 The process of miniaturization often relies on flattening technology, making devices thinner and more like a geometric plane that has only two dimensions. In developing their new micro-supercapacitor, Kaner and El-Kady used a two-dimensional sheet of carbon, known as graphene, which only has the thickness of a single atom in the third dimension.

Kaner and El-Kady took advantage of a new structural design during the fabrication. For any supercapacitor to be effective, two separated electrodes have to be positioned so that the available surface area between them is maximized. This allows the supercapacitor to store a greater charge. A previous design stacked the layers of graphene serving as electrodes, like the slices of bread on a sandwich. While this design was functional, however, it was not compatible with integrated circuits.

In their new design, the researchers placed the electrodes side by side using an interdigitated pattern, akin to interwoven fingers. This helped to maximize the accessible surface area available for each of the two electrodes while also reducing the path over which ions in the electrolyte would need to diffuse. As a result, the new supercapacitors have more charge capacity and rate capability than their stacked counterparts.

Interestingly, the researchers found that by placing more electrodes per unit area, they boosted the micro-supercapacitor’s ability to store even more charge. 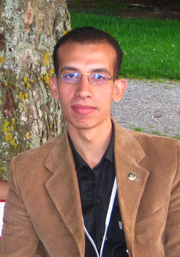 Kaner and El-Kady were able to fabricate these intricate supercapacitors using an affordable and scalable technique that they had developed earlier. They glued a layer of plastic onto the surface of a DVD and then coated the plastic with a layer of graphite oxide. Then, they simply inserted the coated disc into a commercially available LightScribe optical drive — traditionally used to label DVDs — and took advantage of the drive’s own laser to create the interdigitated pattern. The laser scribing is so precise that none of the “interwoven fingers” touch each other, which would short-circuit the supercapacitor.

“To label discs using LightScribe, the surface of the disc is coated with a reactive dye that changes color on exposure to the laser light. Instead of printing on this specialized coating, our approach is to coat the disc with a film of graphite oxide, which then can be directly printed on,” Kaner said. “We previously found an unusual photo-thermal effect in which graphite oxide absorbs the laser light and is converted into graphene in a similar fashion to the commercial LightScribe process. With the precision of the laser, the drive renders the computer-designed pattern onto the graphite oxide film to produce the desired graphene circuits.”

“The process is straightforward, cost-effective and can be done at home,” El-Kady said. “One only needs a DVD burner and graphite oxide dispersion in water, which is commercially available at a moderate cost.”

The new micro-supercapacitors are also highly bendable and twistable, making them potentially useful as energy-storage devices in flexible electronics like roll-up displays and TVs, e-paper, and even wearable electronics.

The researchers showed the utility of their new laser-scribed graphene micro-supercapacitor in an all-solid form, which would enable any new device incorporating them to be more easily shaped and flexible. The micro-supercapacitors can also be fabricated directly on a chip using the same technique, making them highly useful for integration into micro-electromechanical systems (MEMS) or complementary metal-oxide-semiconductors (CMOS).

These micro-supercapacitors show excellent cycling stability, an important advantage over micro-batteries, which have shorter lifespans and which could pose a major problem when embedded in permanent structures — such as biomedical implants, active radio-frequency identification tags and embedded micro-sensors — for which no maintenance or replacement is possible.

As they can be directly integrated on-chip, these micro-supercapacitors may help to better extract energy from solar, mechanical and thermal sources and thus make more efficient self-powered systems. They could also be fabricated on the backside of solar cells in both portable devices and rooftop installations to store power generated during the day for use after sundown, helping to provide electricity around the clock when connection to the grid is not possible.

“We are now looking for industry partners to help us mass-produce our graphene micro-supercapacitors,” Kaner said.

Kaner and El-Kady discuss the technology behind their micro-supercapacitors (December 2012):