A team led by researchers at the UCLA Henry Samueli School of Engineering and Applied Science has developed nanostructures made from a compound of three metals that increases the efficiency and durability of fuel cells while lowering the cost to produce them. Their solution addresses vexing problems that have stalled the adoption of this technology.

Yu Huang, a UCLA associate professor of materials science and engineering, was the principal investigator of the research, which was published in the June 12 issue of Science. 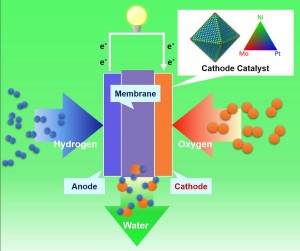 PEM fuel cell. Adding a third metal, molybdenum, to the surface of platinum-nickel nanostructures made the alloy surface more stable and prevented the loss of nickel and platinum over time. Image credit: Yu Huang Lab/UCLA (Click image to enlarge)

Proton exchange membrane fuel cells have shown great promise as a clean energy technology with numerous applications including zero-emission vehicles. The fuel cells work by causing hydrogen fuel and oxygen from the air to react to produce electricity, and the exhaust they create is water — rather than the pollutants and greenhouse gases emitted by traditional car engines.

The chemical processes that take place in proton exchange membrane fuel cells are catalyzed by metals. One of those processes is an oxygen reduction reaction, which has typically used platinum as its catalyst. But the high cost of platinum has been a major factor in hindering wider adoption of fuel cells. Scientists have studied alternative catalysts — including using a platinum–nickel compound — but to date, none has been durable enough to be a viable solution.

To create a fuel cell that would be more efficient, more durable and less expensive to produce, the researchers used a surface engineering technique called “surface doping,” in which they added a third metal called molybdenum to the surface of platinum-nickel nanostructures. The change made the alloy surface more stable and prevented the loss of nickel and platinum over time.

The study found that nanostructures with the platinum-nickel-molybdenum surface were 81 times more efficient catalysts than catalysts made from a commercial platinum-carbon compound. And the three-metal compound retained about 95 percent of its efficiency over time — significantly better than the efficiency rate of 66 percent or less for platinum-nickel catalysts.

“We showed that the addition of a third transition metal enables improvement in both efficiency and durability to bring down long-term costs,” said Huang, who is also a member of the California NanoSystems Institute. “In addition, the surface doping approach may also apply to a broad range of catalysts and opens up a new route for catalyst engineering for the search of high performance catalysts for environment protection, energy generation and chemical productions.”

The paper’s co-lead authors were Xiaoqing Huang, a postdoctoral scholar, and Zipeng Zhao, a graduate student; both are members of Huang’s research group.

The research was supported by the Office of Naval Research, the National Science Foundation and the U.S. Department of Energy.