UCLA researchers have used a brain-imaging tool and stroke risk assessment to identify signs of cognitive decline early on in individuals who don’t yet show symptoms of dementia.

The connection between stroke risk and cognitive decline has been well established by previous research. Individuals with higher stroke risk, as measured by factors like high blood pressure, have traditionally performed worse on tests of memory, attention and abstract reasoning. 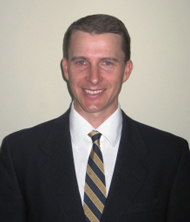 The current small study demonstrated that not only stroke risk, but also the burden of plaques and tangles, as measured by a UCLA brain scan, may influence cognitive decline.

The imaging tool used in the study was developed at UCLA and reveals early evidence of amyloid beta “plaques” and neurofibrillary tau “tangles” in the brain — the hallmarks of Alzheimer’s disease.

The study, published in the April issue of the Journal of Alzheimer’s Disease, demonstrates that taking both stroke risk and the burden of plaques and tangles into accout may offer a more powerful assessment of factors determining how people are doing now and will do in the future.

“The findings reinforce the importance of managing stroke risk factors to prevent cognitive decline even before clinical symptoms of dementia appear,” said first author Dr. David Merrill, an assistant clinical professor of psychiatry and biobehavioral sciences at the Semel Institute for Neuroscience and Human Behavior at UCLA.

This is one of the first studies to examine both stroke risk and plaque and tangle levels in the brain in relation to cognitive decline before dementia has even set in, Merrill said.

According to the researchers, the UCLA brain-imaging tool could prove useful in tracking cognitive decline over time and offer additional insight when used with other assessment tools.

For the study, the team assessed 75 people who were healthy or had mild cognitive impairment, a risk factor for the future development of Alzheimer’s. The average age of the participants was 63.

In addition, each participant was injected with a chemical marker called FDDNP, which binds to deposits of amyloid beta plaques and neurofibrillary tau tangles in the brain. The researchers then used positron emission tomography (PET) to image the brains of the subjects — a method that enabled them to pinpoint where these abnormal proteins accumulate. 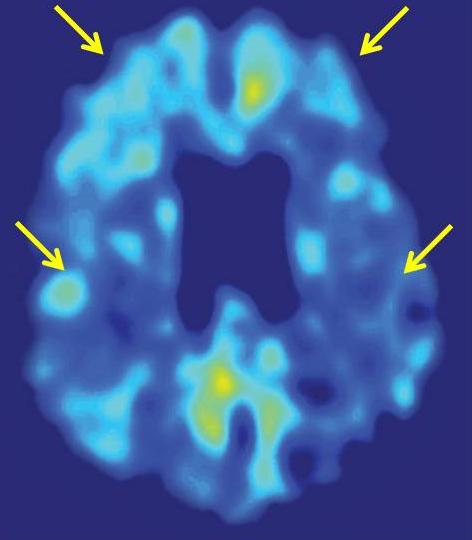 Brain scan. An FDDNP brain scan of an individual with mild cognitive impairment (MCI) illustrates the parietal and frontal regions of the brain (see arrows) that have significant relationships to cognitive function. The lateral temporal lobe was another significant region, but is not included in this brain section. (Image credit: UCLA)

The researchers also observed that FDDNP binding levels in the brain correlated with participants’ cognitive performance. For example, volunteers who had greater difficulties with problem-solving and language displayed higher levels of the FDDNP marker in areas of their brain that control those cognitive activities.

“Our findings demonstrate that the effects of elevated vascular risk, along with evidence of plaques and tangles, is apparent early on, even before vascular damage has occurred or a diagnosis of dementia has been confirmed,” said the study’s senior author, Dr. Gary Small, director of the UCLA Longevity Center and a professor of psychiatry and biobehavioral sciences who holds the Parlow–Solomon Chair on Aging at UCLA’s Semel Institute.

Researchers found that several individual factors in the stroke assessment stood out as predictors of decline in cognitive function, including age, systolic blood pressure and use of blood pressure–related medications.

Small noted that the next step in the research would be studies with a larger sample size to confirm and expand the findings.