UA geneticist Taylor Edwards used CyVerse’s data-sharing capabilities to coordinate with his research partners and decipher the data that led to the discovery of the new species.

Shakespeare’s Juliet once famously pondered “what’s in a name,” and the answer would be $100,000 in the case of the recently discovered Goode’s Thornscrub Tortoise (or Gopherus evgoodei in the Latin), a species native to the area of southern Sonora, western Chihuahua and northern Sinaloa, Mexico. A description of the species was published in the journal ZooKeys.

The species’ name was auctioned to a coalition of four donors, the Andrew Sabin Family Foundation, Global Wildlife Foundation, Rainforest Trust and the Turtle Conservancy. All of the funds will go toward conserving the species’ habitat in the tropical deciduous forests of Mexico. 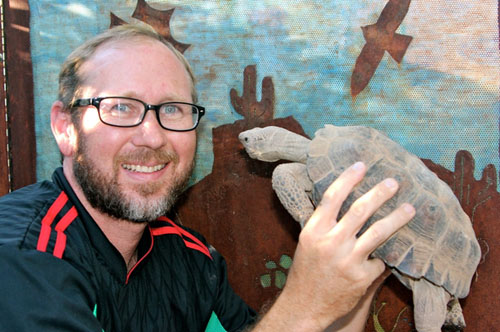 Taylor Edwards, a University of Arizona geneticist and conservationist with the Arizona Research Laboratories University of Arizona Genetics Core, used CyVerse‘s data-sharing capabilities to coordinate with his research partners and decipher the data that led to the discovery of the new species.

But rather than christen his discovery by traditional means, Edwards put the name up for auction — at the Turtle Conservancy‘s third annual Turtle Ball, an annual New York City event designed to raise awareness of the plight of turtles, and to further fund the nonprofit’s mission to protect the most endangered turtles and tortoises and their habitats worldwide.

“I wanted to do this not just as an academic exercise, but also to make a difference in helping to preserve this new species,” Edwards said. “In an academic setting, when you’re just churning out scientific papers, activism seems distant sometimes. I wanted to bridge that distance as a conservation geneticist. And I figure if we are introducing a new species to the world and we already know that it and its habitat are imperiled, why not start it out with a trust fund?”

Let the Tortoise Take the Floor

The Turtle Ball was conceived by Eric Goode, restaurateur, hotelier, and founder and president of the Turtle Conservancy — and namesake of Goode’s Thornscrub Tortoise. Since 2013, the annual event has brought artists, cultural influencers, and celebrities out of their shells to raise awareness of the threats to turtles and tortoises worldwide.

The Turtle Conservancy is a registered nonprofit dedicated to the protection of the world’s slow-swimming — or stepping, in the case of tortoises ­— reptiles. The conservancy has active projects in China, Madagascar, Guyana, India, Mexico, Nicaragua, Pakistan, South Africa and the United States.

The 2015 Turtle Ball was hosted by actors Naomi Watts and Liev Schreiber and attended by mountaineer and adventurer Rick Ridgeway, well-known conservationist Russell Mittermeier of Conservation International and Bobby Kennedy, who was awarded a special honor for his achievements as a defender of the environment. The ball also featured the unique opportunity to bid on the right to name the newly described tortoise species.

“These are challenging times for research and conservation, in terms of finding financial resources,” Edwards said. “This was an outside-of-the-box way of keeping momentum in science and conservation. And with only a little over 50 living species of tortoises currently known to science, this was a unique opportunity for the bidders to be a part of taxonomic history.”

A Tale of Two Tortoises

In the hot, humid climate of Sinaloa, Mexico, there is a place where the landscape shifts dramatically. Dense, nestled and inevitably thorny Thornscrub of the north gives way to tropical, deep-green deciduous trees of the more southerly region.

The tortoise species change with the vegetation. To the north dwell the Sonoran Desert Tortoises, a species which, if you live in southern Arizona, you may find trekking amiably along many desert pathways. But south of the Thornscrub/tropics intersection, the tortoises are different.

“They can be strikingly yellow or orange, and their carapace, or shell, is flatter and squarer than what is seen in typical Sonoran individuals. The scales on their forelimbs frequently protrude and can be very spiky,” Edwards said, describing the species he recently discovered. “To hold one is to know you are holding something special.”

Many research questions remain for Goode’s Thornscrub Tortoise, Edwards said, such as what they eat, how social they are, what their reproductive cycle is like or how far south their home range extends. “Our southernmost sample was collected south of the Rio Fuerte in Sinaloa,” he said.

By “sample,” Edwards is referring to blood draws collected from tortoises found during field trips to the heat-blasted Sinaloan tortoise boundary while conducting his research as a UA doctoral candidate in the School of Natural Resources and the Environment, housed in the College of Agriculture and Life Sciences. The blood of the tortoises yielded enormous quantities of genetic information, which Edwards later parsed apart in his lab at the UA’s BIO5 Institute.

“My role as an evolutionary biologist is to tease apart the evolutionary history of this animal, investigate its origins and help to define its evolutionary potential,” he explained. To fulfill that role, Edwards began mining the genetic data, looking for patterns that would indicate whether, and how, the yellow and orange Sinaloan tortoises are related to the more mottled Sonoran species.

“CyVerse was critical in being able to delineate these species,” Edwards said. “We’ve been able to collaborate on this project and share large amounts of data between UA researchers, Kenro Kusumi and Mark Tollis of Arizona State University, and others. This collaboration would be extremely challenging if not for CyVerse.”

The size of the data files for Edwards’ Mexican tortoise project could not be transferred or shared online via other Internet platforms, he noted.

“The volume of data for this project was significant,” he said.

As was the price of the tortoise’s name. Yet perhaps the chance to go on living in the place where you belong is something on which no one can put a price.

“Mexico is faced with a privileged situation with its as-yet untouched natural habitats,” Edwards said. “We can make efforts to protect tortoises before they arrive at the edge of extinction. Unfortunately, many species do not receive this kind of valuable research attention until after their populations have declined.”