A leadership program sponsored by UA Cooperative Extension has created a network of public officials throughout rural Arizona.

Diane Joens has piled up an impressive list of accomplishments over the last decade: mayor of Cottonwood, Ariz., co-founder of Stewards of Public Lands, editor and publisher of The Verde River Almanac and champion of water rights, reclamation and downtown development.

Joens never imagined herself in any of these leadership roles before she was selected for Project CENTRL in 2001. Then she achieved all of them. “Project CENTRL was a life-changing experience,” she said.

Developed by University of Arizona Cooperative Extension in the early 1980s, Project CENTRL, officially the Center for Rural Leadership, is an intensive two-year program that cultivates passionate leaders to serve rural communities in Arizona. 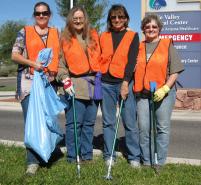 Mayor Diane Joens has been co-chair of Stewards of Public Lands for the past seven years. Besides working with community volunteers to clean up public lands, she also assists The Compassionate Friends with their Adopt a Highway project on Highway 89A near the Verde Valley Medical Center. Members are, from left, Kristina Bonfoey, Joens, Cheryl Oliver and Phyllis Kennedy. (Photo by Gene Bonfoey)

Project CENTRL began in 1983 with a seed grant from the W. K. Kellogg Foundation, with a mission to “assist highly motivated leaders improve and expand their leadership skills to become more effective and responsive in meeting the needs of rural people in public affairs.”

The program is focused on developing the leadership and problem-solving skills needed for handling complex contemporary issues. The CENTRL experience includes six highly interactive seminars in Arizona, an international study tour in Sonora, Mexico, a final national seminar in Washington, D.C. and an internship project incorporating the skills learned in the program.

Over the past two decades, more than 500 program graduates have created a statewide network in communities throughout rural Arizona. They serve as state legislators, county supervisors, mayors, city council members, school board members, constables or commissioners and other public service positions.

“I wanted to learn to be a leader,” Joens said, and recalled a seminal seminar early in the program.

“A lady talked about doing what your heart tells you to do – and that really spoke to me. It changed my decision-making about what to do. Get involved in volunteer work and serve the public – that’s the route I took.” Joens then retired from her county job and rolled up her sleeves.

Her Project CENTRL internship tackled the complexities of water in the Verde Valley, Joens’ home for the last 24 years. She compiled, edited and published The Verde River Almanac, a review of Arizona water rights, water disputes, the river’s history, geography, geology, hydrology and much more.

She also collaborated with researchers and writers and engaged financial supporters ranging from the Salt River Project and Sierra Club to local businesses and citizens.

“The beautiful Verde River runs through our town,” Joens said. “The Prescott National Forest is on one side, the Coconino on the other. Why people want to dump I do not know,” she said.

“In the first four or five years, we took a full 40-yard dumpster of trash out of the forest every month.”

Joens ran for a seat on the Cottonwood city council in 2003, then mayor in 2007 where she is now in her second term.

“The public elected me to serve. That pretty much astounded me. I would never have had the guts to do that without Project CENTRL.”

Her passion for Cottonwood and the river is infectious. She rattles off her accomplishments: construction of a $17 million recreation center and a revitalized downtown with streetscape upgrades, wine tasting rooms, restaurants, a new hotel, antiques, a refurbished center for the arts, a popular watering hole in a onetime gas station, even the aroma of fresh-baked bread.

Next up is a plan for a solar-powered reclamation plant in the riverfront park.

“When you’re a mayor you can’t claim anything as your own. It’s really teamwork.” Joens said. “We want Cottonwood to be a destination.” She added that this riparian area in Central Arizona could draw visitors for birding, cycling, hiking, kayaking and other recreation.

“I don’t have an agenda. I do have a vision 20 to 25 years out there of what I want the community to look like. I see the city moving in that direction,” Joens said.

Project CENTRL has honored Joens for her work to protect the Verde Valley watershed and selected Cottonwood as the site for its next economic development seminar.

Everett Rhodes, the cooperative extension agent in Pinal County, has directed Project CENTRL since 1997. “This experience involves sharpening your tools and using them to make an impact on rural Arizona,” he said. “It’s an adventure, a journey – and not just for two years. It’s a lifelong journey.”