Faculty members from the UA College of Agriculture and Life Sciences are teaming up with partners at King Abdullah University of Science and Technology in Saudi Arabia to create the Desert Agriculture Research Institute.

Food, clean water and energy – our planet is challenged to meet these basic needs, especially in the harshest environments.

To help solve these global problems, faculty members from the University of Arizona College of Agriculture and Life Sciences are teaming up with partners at King Abdullah University of Science and Technology, or KAUST, on the Red Sea Coast, north of Jeddah, Saudi Arabia.

The state-of-the-art, progressive public university has turned to the UA – a leading institution in arid lands studies – for expertise in the creation of the Desert Agriculture Research Institute.

Kevin Fitzsimmons, director of the UA College of Agriculture and Life Sciences International Programs and an expert in aquaculture, said the partnership is expected to result in groundbreaking research that can aid in developing sustainable farming, water and living systems without damaging the ecosystem.

“Much of this research could impact a good portion of the globe,’’ said Fitzsimmons, who recently returned from KAUST. “Desert seacoasts and arid countries have the highest population growth rates across the planet. We need to find ways to feed, house, employ and find energy for millions and millions of people in exactly those areas.”

Collaborative study at the Desert Agriculture Research Institute is likely to benefit the Middle East, North Africa, South Asia, the U.S. Southwest and Mexico, Fitzsimmons said. “The more we can develop sustainable, productive farming and energy for people in these countries will be to everyone’s benefit.”

Fitzsimmons has visited the campus of the new university four times, most recently in October. KAUST expects to install greenhouses and fish tanks early in 2013 as part of the first phase of the $60 million project. 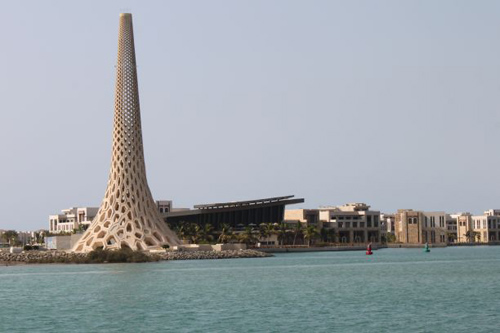 A tower known to students as "the beacon" marks the entrance to the harbor-side campus of the King Abdullah University of Science and Technology in Thuwal, Saudi Arabia. (Photo by Kevin Fitzsimmons)

The UA is contributing expertise but no funding for the project, with KAUST providing for all expenses. The university, which opened in 2009, was developed with an endowment from King Abdullah of Saudi Arabia in conjunction with the Arabian-American Oil Company.

KAUST and the UA recently approved a memorandum of agreement to increase collaborations across several areas of research and outreach. The agreement could help qualify the Desert Agriculture Research Institute for significant grants to further research, Fitzsimmons said.

The UA has a history of collaboration with agricultural communities in arid regions around the world – including Saudi Arabia – dating back to the 1950s.

Through this most recent collaboration, UA faculty members and students are expected to study solar energy, desalinization of sea water, greenhouse food production, farming on desert coastlines and shrimp and fish farming.

KAUST has “virtually scoured the planet for top faculty’’ from the Middle East as well as the U.S., Korea, China, Canada, Spain and England, Fitzsimmons said. 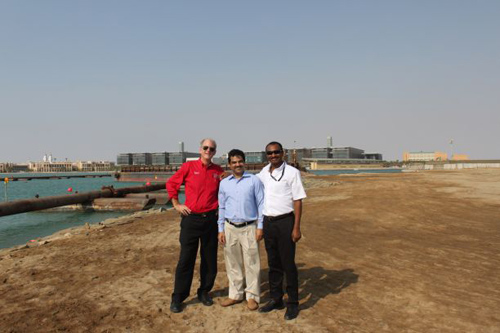 In October, Kevin Fitzsimmons (left), director of CALS International Programs, visited the site where the Desert Agriculture Research Institute greenhouse facilities will be constructed. He is pictured here with Aftab Alam (middle) and Ali Madi Idris (right), a KAUST faculty member formerly of the UA School of Plant Sciences. (Photo by Kevin Fitzsimmons)

Several recent UA doctoral graduates have been hired as junior faculty at KAUST, and some retired UA faculty members have taken more senior positions there. KAUST also is offering internships to UA students.

UA faculty and students benefit from the partnership “in being able to work with an institution that has state-of-the-art equipment and is conducting state-of-the-art science,’’ Fitzsimmons said.

Fitzsimmons is advising on the creation of sustainable shrimp farms and caged fish farming in the Red Sea. He has worked with farmers to integrate seaweeds that absorb nutrients from shrimp waste to create a more sustainable farming method.

“This is something I pioneered in Indonesia after the tsunami – trying to restore the industry and make it more sustainable as we rebuild Sumatra,’’ he said.

The Red Sea has been devastated by overfishing. Creating sustainable methods of shrimp farming and cage farming of amberjacks, snappers, groupers, small tunas and other fish will create food for people and jobs for fishermen while protecting the Red Sea, Fitzsimmons said.

Edward Glenn, professor of soil, water and environmental science at the UA College of Agriculture and Life Sciences, has helped KAUST to obtain halophytes – plants that tolerate high salinity and can be raised as crops irrigated with seawater. One idea is to utilize effluent from shrimp farms to grow plant crops that can be used for direct human consumption, animal forage, or vegetable oil.

Murat Kacira, associate professor of agricultural and biosystems engineering at the UA College of Agriculture and Life Sciences, is advising KAUST on designing efficient, sustainable greenhouses for growing crops in arid and semi-arid lands.

Since the region is hot and humid with little rain, Kacira and Gene Giacomelli, director of the Controlled Environment Agriculture Center, are charged with helping to create systems that can generate power for greenhouses using solar energy, cool and dehumidify the air and use minimal amounts of water.

Kacira will be advising on crop sensing and monitoring systems. He also is helping to select crops for the greenhouses. Lettuce, spinach, tomatoes and strawberries will grow in floating hydroponic systems or other media to minimize water and nutrient use, Kacira said.

A goal of the collaboration is to develop a business model and marketing approach that can be used by growers throughout the world, he added.

“Our goal is to come up with a profitable and economically feasible system which could be adapted and expanded in arid and semi-arid regions to feed the people,” Kacira said. “The big picture is food, energy and water.”