With the help of a $1 million grant from the W.M. Keck Foundation, geoscientists are gearing up to study subsurface fluid-rock systems, complex interactions between underground fluids such as oil or groundwater, and how they influence the rocks through which they move.

Geoscientists at the University of Arizona will combine multiple disciplines to study the fluids beneath the Earth’s surface with the help of a $1 million grant from the W.M. Keck Foundation. 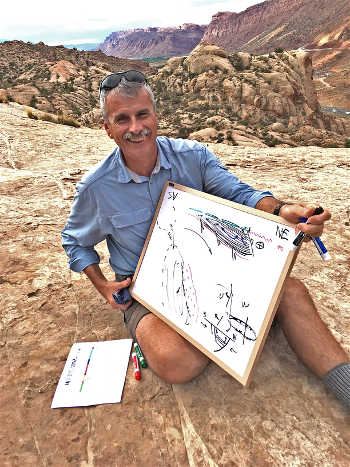 Subsurface fluids such as oil, gas, deep brine and shallow groundwater move large amounts of heat and solutes (dissolved substances) through the crust as they chemically and physically alter rocks. Figuring out how these fluids interact with subsurface rocks is important not only for understanding critical energy and mineral resources but also for effective management of energy byproducts such as wastewater, carbon dioxide and spent nuclear fuel.

With the three-year grant from the Keck Foundation, UA researchers will integrate geologic, geochemical, geochronologic and hydrogeologic observations and develop an integrated, interdisciplinary understanding of subsurface fluid-rock systems. Prior to this, most approaches to studying subsurface interactions looked at only parts of the system in isolation.

“Our goal is to understand when and how different paleofluids were generated, how they moved, interacted with and altered rocks, and what this says about the geologic history of the region,” said UA geosciences professor Peter Reiners, who is leading the team. Paleofluids are those fluids that have been present over a period of time in the past.

“A lot of studies focus on one aspect of fluid-rock systems, like metal ores, or oil, or hot springs,” Reiners said. “We want to know how these fluids and their reaction products are related, and how to apply this approach in any setting.”

The research team will focus on the Paradox Basin, located mostly in eastern Utah and western Colorado, a region known for diverse kinds of paleofluids that produced uranium, copper, petroleum, gas and other deposits that left behind enigmatic evidence for flow along faults and through porous and permeable rocks. The researchers will use the distributions, ages and geochemical compositions of accumulations of metals and hydrocarbons, altered rocks and trapped paleofluids, together with geophysical models, to understand the integrated history of paleofluid flow over the 300-million-year history of the basin.

“By combining all these different perspectives and approaches, we hope to not only understand this particular basin, but also to change how similar settings are interpreted, through understanding the connections of evolving crustal paleofluid systems,” Reiners said.

“To learn about the hundreds of millions years’ worth of history in the flow of fluids beneath the Earth’s surface is a monumental undertaking,” said UA President Robert C. Robbins. “The fact that we are ready to dig into a project this complex is a testament to the wealth of expertise at the UA and the appreciation our faculty has for the power of interdisciplinary collaboration. We are so grateful for the Keck Foundation’s partnership in this incredible project.”

“The UA is proud of the research that Peter Reiners and his team are doing to advance our understanding of key landscape shifts that fundamentally alter our environment,” said Kimberly Andrews Espy, senior vice president for research at the UA. “We are truly appreciative of this support from the W.M. Keck Foundation and its dedication to large-scale, integrated projects using distinctive, novel approaches to solving some of our greatest challenges. This is the second Keck award in two years and reflects the talent of our faculty and their high-quality research.”

Based in Los Angeles, the W.M. Keck Foundation was established in 1954 by the late W.M. Keck, founder of the Superior Oil Co. The foundation’s grant making is focused primarily on pioneering efforts in the areas of medical research, science and engineering, and undergraduate education. The foundation also maintains a Southern California Grant Program that provides support for the Los Angeles community, with a special emphasis on children and youth. For more information, visit www. wmkeck.org.