For decades, research from UA scientists has shaped our understanding of our solar system and universe – beginning with the Apollo 11 mission 50 years ago.

When the first humans stepped onto the moon a half-century ago on July 20, 1969, they knew they were venturing into the unknown. Some had feared their lander would be swallowed up by bottomless layers of dust as almost nothing was known about the moon surface at the time. But they knew it wouldn’t, thanks in large part to groundbreaking research being performed at the University of Arizona’s then fledging Lunar and Planetary Laboratory, or LPL.

When Gerard P. Kuiper founded the laboratory nine years earlier, in 1960, there was skepticism and a lack of interest in humans visiting the moon. But reaching the moon became a priority as the space race ramped up in the early ’60s. Kuiper and his UA laboratory was suddenly in demand. 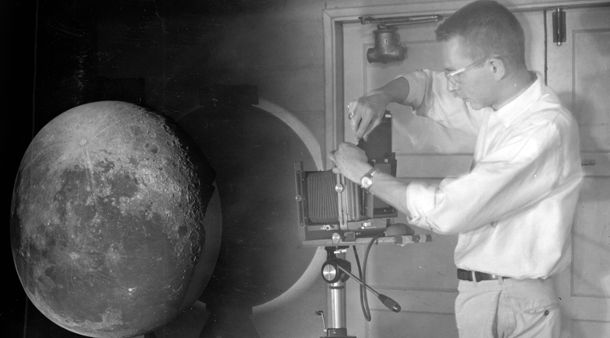 Now, on the 50th anniversary of the first manned mission to the moon marked by the Apollo 11 landing, UA scientists celebrate the pioneering and pivotal role the UA has held in the explosion of space science research, helping to shape what we know about our solar system and beyond today.

“The UA has been a part of nearly every NASA planetary exploration mission, and with leadership roles on many of them,” said Tim Swindle, director of the UA Department of Planetary Sciences and LPL. “Our graduates and alumni have also been involved in many missions. That is our goal.”

William K. Hartmann, a UA alumnus who studied with Kuiper, was instrumental in helping to create some of the first maps of the moon.

“We projected photos of the moon onto a white globe, then photographed the globe from different angles to make an atlas of lunar features from overhead, as they would be seen by astronauts orbiting the moon,” Harmann said.

He also shaped early theories around the origins of Earth’s moon and has made other significant contributions to the field of lunar science.

Over the course of his scientific career, Hartmann discovered several impact basins on the moon. During the 1960s, he predicted the age of the lunar lava plains. His predictions were confirmed through samples returned by the Apollo missions.

The Apollo missions also influenced Kuiper while at the UA. He took his students on field trips to places on Earth that he felt were representative of what students might see on the moon or in the solar system, such as Meteor Crater in northern Arizona, dune fields or the extensive lava flows blanketing the Big Island of Hawaii. Those types of instructive field trips continue today.

“During our field trips, students visit planetary analog sites,” Swindle said. “It’s an important part of our department culture. We can send a robotic spacecraft to places in our solar system and beyond, but we’ll never be able to see them as well as we can see places on Earth. By comparing those sites using every scientific technique we can think of, we can learn what those places out there in space might be like.”

In preparation for the Phoenix Mars mission, the first planetary mission led by a university, a UA team traveled to Antarctica to study how the instruments they had developed would work in what is considered the most Mars-like environment on Earth.

The LPL’s legacy of studying places on Earth to understand places far, far away becomes more relevant as more powerful telescopes have begun discovering a growing list of planets orbiting other stars as well as stranger objects within our solar system, such as the asteroid Bennu.

Instruments onbord OSIRIS-REx, a UA-led sample-return mission, are currently imaging and mapping Bennu’s surface. Planetary scientist and UA professor Erik Asphaug took courses at the UA in both astronomy and geoscience and is currently analyzing OSIRIS-REx images to understand the phsyics of Bennu’s rocky surface in microgravity and its composition.

In September 2023, OSIRIS-REx will return with prestine samples scooped from Bennu. The samples will be studied to learn more about the earliest history of the solar system, much like the lunar rocks returned from the Apollo missions.

“Kuiper started with the right attitude and what was an unusual approach at the time – namely turning astronomical objects into places,” Swindle said. “His guiding idea was to not just obtain higher and higher resolution images, but also figure out what those images mean and what those objects would look like if you were standing there. And that is really what we have been doing here at LPL ever since.”