Materials science engineer Pierre Deymier is bending sound waves in nature-defying ways that could quiet our cities, heal our bodies, provide new sources of energy, and compute and process information.

For decades, advances in electronics and optics have driven progress in information technology, energy and biomedicine. Now researchers at the University of Arizona are pioneering a new field — phononics, the science of sound — with repercussions potentially just as profound. 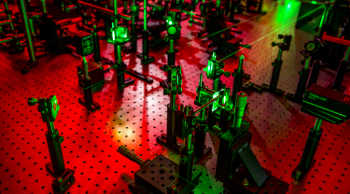 “If engineers can get acoustic waves to travel in unnatural ways, as they are starting to do with light waves, our world could look and sound radically different,” said Pierre Deymier, UA professor and head of materials science and engineering and a member of the BIO5 Institute.

Imagine a wall that lets you whisper to a person on the other side but does not let you hear that person. Or a Band-Aid that images tissue through the vibrations it emits. Or a computer that uses phonons — a type of particle that carries sound and heat — to store, transport and process information in ways unimaginable with conventional electronics.

“It may sound like weird science, but I believe it is the wave of the future,” Deymier said.

Deymier has received $1.9 million from the National Science Foundation’s Emerging Frontiers in Research and Innovation, or EFRI, program to lead a four-year study on manipulating how sound waves behave. His collaborators are Pierre Lucas, a UA professor of materials science and engineering, and Nicholas Boechler, assistant professor of mechanical engineering at the University of Washington.

The UA is one of nine U.S. universities to receive 2016 EFRI awards in the area of new light and acoustic wave propagation, or NewLAW. The National Science Foundation announced the awards Monday.

Breaking the Laws of Waves

In common logic, the concept of reciprocity says that waves, such as electromagnetic, light and acoustic waves, behave the same regardless of their direction of travel. It’s a symmetrical process — unless there is a material barrier that breaks that symmetry. 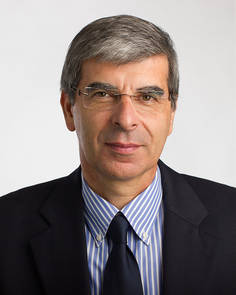 Other UA researchers, such as professor Hao Xin in the Department of Electrical and Computer Engineering, have created advanced materials that bend light in unnatural ways to render parts of an object invisible. Similarly, Deymier’s research could lead to walls that allow sound to pass more easily in one direction, or objects that remain silent when approaching from one direction.

The Power of Phonons

Most modern technologies are based on manipulation of electrons and photons. Deymier is one of the pioneers in the emerging discipline of phononics, which encompasses many disciplines, including quantum physics and mechanics, materials science engineering and applied mathematics.

He has developed specialized phononic crystals — artificial and elastic structures with unusual acoustic wave propagation capabilities, such as the ability to increase the resolution of ultrasound imaging with super lenses or to process information with sound-based circuits.

For the new NSF-funded study, he is using advanced material, chalcogenide glass, which has mechanical properties that can be dynamically modulated in space and time to break reciprocity and transmit sound in a single direction.

This line of investigation ultimately could result in a vast array of products with peculiar features that could improve noise abatement, ultrasonic imaging and information processing technologies, Deymier said.

“Imagine a computer whose operation relies on processing information transported by sound through non-reciprocal phononic elements instead of electrical diodes, or a medical ultrasonic imaging device with extraordinary resolution,” he said.

“Working with phonons is incredibly exciting. We’re going to change the way people think about sound and are opening an entire new world.”