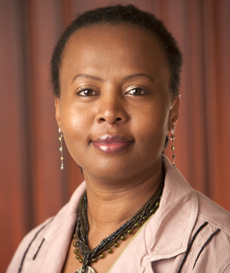 Thirty years after it was given a name, the epidemic of AIDS and its related illnesses continues to kill millions of people around the world. But nowhere are the numbers as high today as in sub-Saharan Africa, and in particular, the nation of South Africa.

Last week, a physician who has watched her country seesaw from denial to resolve delivered the seventh annual C. Davenport Cook Grand Rounds Lecture in International Child Health at Yale School of Medicine, speaking about how things are changing in South Africa and, perhaps, all of sub-Saharan Africa. Some of the changes she described are medical, others, attitudinal.

Dr. Thembi Xulu is medical director of Right to Care, a leading non-profit HIV/AIDS organization based in Johannesburg, as well as one of this year’s Yale World Fellows. Xulu has for many years been a persistent advocate for educating South Africans about the causes of AIDS and ways to prevent it, and for bringing affordable medication to those afflicted with it. She has grappled with governments in denial, unyielding cultural traditions, lack of funding and victims too ashamed to seek help.

Speaking to more than 200 students, faculty and observers who had packed the Fitkin Amphitheater, Xulu recalled how AIDS and HIV, the virus that causes it, were barely on South Africa’s radar screen until the early-to-mid 1990s. By that time, HIV infections and AIDS deaths were beginning to stabilize and even decline in the United States, she noted, but in South Africa, the numbers were spiking. Today, one in eight South Africans is infected with the virus that causes AIDS.

“At present,” Xulu said, “South Africa is home to the largest HIV population in the world.”

Many AIDS activists and experts place blame on South Africa’s government, which was slow to acknowledge the epidemic as it spiraled out of control in the 1990s. The following years brought something worse: scientific denialism. Thabo Mbeki, South Africa’s president for most of the past decade, flat-out insisted that HIV does not cause AIDS.

In 2009, South Africa elected a president who accepted the science of AIDS transmission, prevention and treatment. President Jacob Zuma announced a nationwide campaign that aims to test 15 million South Africans for HIV and reduce its incidence by 50% by mid-2011. Hospital CEOs and school principals are among those who must get tested. Zuma himself got tested — and in an attempt to remove the associated stigma, he publicly announced his results (negative).

During all the years of denialism, however, physicians had not been sitting idly, waiting for the government to come to its senses. Xulu and many other doctors were on the front lines, trying to reach people who did not necessarily want to be reached because even the suggestion that they might be infected with the virus could mean banishment from their families and communities. Even when people were found and tested, it was difficult to get them adequate and consistent treatment, particularly in rural areas, she told the audience.

But despite many obstacles, the number of deaths slowly started to come down. Beginning in 2003, South Africa got the first major infusion of help from PEPFAR — the President’s Emergency Plan for AIDS Relief, the Bush administration-led initiative to pump billions of dollars into fighting the global HIV/AIDS pandemic. “As PEPFAR partners, we were underground,” Xulu said, “collecting HIV data, putting people on treatment and presenting these [data] to the government.” But AIDS activists say nobody was listening because in the eyes of their leaders, HIV did not cause AIDS.

While the South African government was not listening, the demographics of AIDS were changing in an appalling fashion, putting an entire generation at risk. Because HIV in South Africa is transmitted predominantly through heterosexual sex, women now make up more than half of those living with HIV. And because mother-to-child transmission is the other main infection route, 2.5% of children aged 2-14 are infected with HIV, as are nearly 17% of those aged 15-49. Around 15 million children have been orphaned by the disease, said Xulu.

Further, rates of highly infectious tuberculosis, a leading cause of death among those infected with HIV, have also soared, she noted. HIV/AIDS and TB are considered twin epidemics. According to USAID, an estimated 73% of new TB patients are co-infected with HIV and an estimated 31% of all TB-HIV cases in Africa are in South Africa.

Thanks to efforts of healthcare workers, who were not deterred by such statistics, Xulu said, the big picture of AIDS is starting to change in South Africa, and she expressed hope that the small improvements in recent years will give way to major changes in the health of South Africa’s citizens, particularly its most vulnerable children.

Most important, she noted, there is a new push for infection control, including use of condoms and a needle-exchange program. In what is perhaps the most startling change, she added, South Africa is attempting to empower its women, long victims of violence and discrimination, to take control of preventing their own HIV infections.

“Because men are not in the health system — they are out in the mines, out at work — women take children to work, where they have access to HIV testing,” Xulu said. “It’s always been clear to us that the way [to prevent HIV] would be to have a female control method.” She highlighted the results of a recent study done in South Africa on use of a vaginal gel that women insert prior to and following sexual intercourse. “There was a 39% protective effect on the women who used it. It’s a method that empowers woman and brings back their dignity,” she told the gatering.

Women are being empowered in other ways, as well, to stop them from engaging in casual sex and sex-for-pay, other major avenues of HIV transmission, said Xulu. “The aim is to strengthen and educate women not just in terms of HIV education, but to get them into small- and medium-sized businesses because for women who depend on men to provide for them, a lot of the sex is transactional.”

Still, the family and social stigma of HIV infection stubbornly persists, she said. “In rural areas there are no health systems, there is no HIV testing. So HIV is taboo. If you have HIV you are shunned, discriminated against, and your family hides you from the community. Where there is no access to care, the family network doesn’t function.”

Other cultural obstacles are slowly being overcome, such as the use of “traditional healers” in lieu of science-based methods, Xulu said, noting that people used to be told to “sleep with a virgin to cure their HIV.”

There are also lingering problems within the healthcare community itself. “The TB workers still don’t understand that the only way to meet their targets is to pay attention to HIV, and the same applies to HIV workers,” she said. One way South Africa is working to overcome this is to put treatment for both illnesses into the same clinic, with the same healthcare provider.

There is still an ongoing debate in South Africa over whether to focus more on treatment or prevention. Treatment, Xulu believes, can only go so far. “We still have 3 million deaths and 3.5 million new infections. So it doesn’t make sense to push the treatment agenda and do nothing about prevention,” she asserted. But not all in her country are hearing the message about condoms, she added. “Persistent use is not happening, especially in older age groups.”

Even when the message of prevention is heard, and even when people want to receive treatment, there is still the problem of getting care to people who live in rural areas. “We are now trying to move care closer to the patients,” Xulu said, adding that it’s impractical to tell a rural mother who has traveled miles to get care for her child to “bring the baby back the next day.”

Xulu said she is optimistic about the future. The money from the United States government and various non-profit organizations has made a big difference in survival rates, she said. “In Africa and all the developing world, there are a lot of healthy HIV and TB patients, and HIV-uninfected babies.”

Xulu herself has played no small part in the improvement. “Thembi Xulu embodies the essential qualities that we seek to identify and nurture in a Yale World Fellow,” according to the program’s director, Dr. Michael Cappello, professor of pediatrics at Yale School of Medicine and physician of Yale Medical Group. “She is passionate about her work, fully committed to effecting positive change on a global scale, and open to dialogue and collaboration with colleagues from across disciplines and cultures. In her semester with the program, Thembi has already left an indelible and positive impact on the Yale community.”

While health professionals in South Africa are starting to wonder what the major new sources of HIV infection will be, Xulu said, “The good news is that there is new political will. … The government has increased funding of the HIV program 96% in 2010. And we are talking about implementing national health insurance by 2012.”

“So we are making progress,” she added, “but we are not there yet.”