Freshwater fish with bellies full of shrews – one trout a few years back was found to have eaten 19 – aren’t as random as scientists have thought.

In some years, probably when shrew populations boom, the small mouse-like land animals end up in the stomachs of a quarter of rainbow trout and Arctic grayling larger than a foot, according to University of Washington-led research in the coastal lakes and streams of Southwest Alaska.

“Not all the fish could eat shrews even if they were abundant. A fish must be larger than 12 inches to have a mouth big enough to swallow these prey whole,” said Pete Lisi, lead author of a paper in the October issue of Ecology of Freshwater Fish.

“However, in pools where almost every fish was large enough to eat a shrew, it was only the largest fish that had shrews – often six to eight in their stomachs – many more than the next largest fish,” he said. 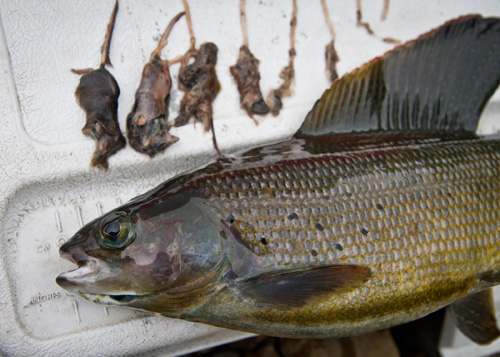 This Arctic grayling in Southwest Alaska had eight shrews in its stomach, each in varying degrees of decay, the tails being the last to be completely digested. Image credit: Jonny Armstrong

The work, which Lisi did while earning his doctorate at the UW, is a part of a larger ongoing project monitoring salmon and other fish and learning their life histories, including what they eat by examining stomach contents.

“The last part of the shrew to remain is usually the tail. It seems the least digestible part and the easiest way to count the number of shrews that the fish had consumed,” Lisi said. Fish were anesthetized and their stomach contents washed out through their mouths to be tallied, then the fish were released as they revived. 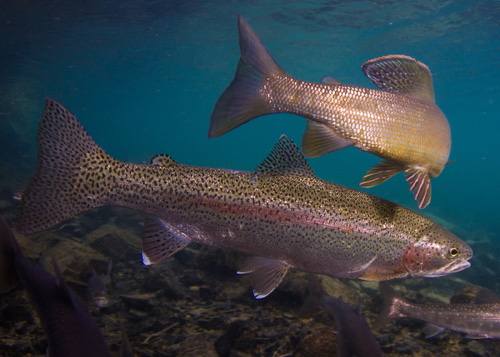 A rainbow trout (center) in the Wood River Basin in Alaska. Thirteen years of data, collected as part of a long-term project monitoring fishes and their habitat, was used to consider the role of small mammals in their diet. Image credit: Jonny Armstrong

“Our data suggest a few of the fish are really good at getting shrews,” Lisi said. “Like the one trout that had 19 shrews in its gut – found in a neighboring river basin by fish and wildlife researchers. It wouldn’t surprise me if some fish were ‘shrew specialists,’ able to attack animals at the water’s edge or even knock shrews into the deeper water by attacking the banks, but I have not observed anything like this myself.

“I remember fly fishing for these fish in an area where shrews were abundant and the fish literally leaped completely out of the water after lures, rather than slowly rising at the fly at the surface,” he said. “A number of anglers have reported seeing fish leaping onto banks to get frogs, birds and small mammals, but it still remains fish lore to me. I’m still waiting for the video of a trout pulling shrews off a bank.”

The co-authors said that, more typically, shews hunting for insects along stream sides may slip into the water, or maybe they will wade in after insects to eat but once in the streams they themselves are scarfed down. 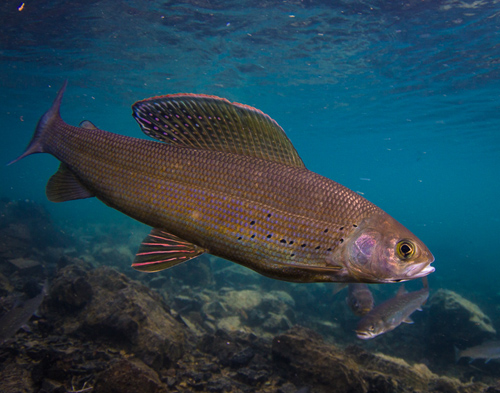 The rainbow trout and Arctic graylings studied are not known to go to sea as salmon do. The two species gorge on eggs and carcasses from salmon returning to spawn, and eat insects and other small fish at other times. Shrews show up in greater numbers in the fish during certain years, most likely when the shrew population booms and shrews are plentiful, the researchers think.

“Shrews are really territorial, so it’s likely that during boom years more shrews may decide to take bigger risks by crossing streams and entering water where their food is more plentiful.” Lisi said.

Lisi, who is now doing postdoctoral research at the University of Wisconsin-Madison, conducted the study while in the UW research group of co-author Daniel Schindler, professor of aquatic and fishery sciences. The other co-authors are from the same group: Kale Bentley, who earned a master’s and is now with the Washington Department of Fish and Wildlife, and Jonathan Armstrong, who earned a doctorate and is now at the University of Wyoming.