Brown is Green is working with biomedical labs to test whether traffic-light themed stickers can help researchers conserve energy without putting their research at risk.

PROVIDENCE, R.I. [Brown University] — Labs exist for experimentation, but in a few labs of the Division of Biology and Medicine, the subjects are not only cells and tissues, but also the researchers themselves. A Brown is Green initiative is piloting a way for people to save energy in the lab without worrying that they’ll compromise their work.

The test employs simple stickers that borrow on a stoplight metaphor. A red sticker warns people never to turn a piece of equipment off. Green stickers assure people that they can turn off the machine after use. Yellow ones caution people to consult the lab manager before flipping the switch.

As high tech as research labs are, said Chris Powell, director of sustainable energy and environmental initiatives, it’s essential to look at behavior and culture to achieve sustainability goals. Something as cheap and low-tech as a sticker might make a meaningful difference on a $100,000 instrument.

“Human behavior is such a big part of the problem,” Powell said. “Technology by itself isn’t going to get you all the way you need to go.” 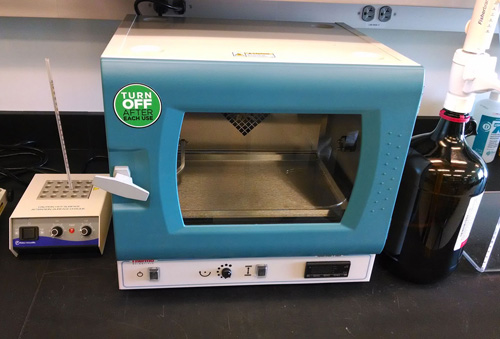 Safe to shut down? Green means Go ahead and turn it off after use. Yellow means Ask someone. Red means Don’t ever turn it off. Simple messages can save labs energy and prevent accidental damage to long-running experiments. Image credit: Meggie Patton/Brown University

In a related program last fall, Brown is Green worked with the Division of Biology and Medicine, the Office of Environmental Health and Safety, and the consulting firm GreenerU to provide stickers to all labs with fume hoods (highly ventilated, enclosable workstations). Those stickers remind researchers to keep the hood sashes open to an optimal 18 inches when in use and closed when not in use. That practice has become increasingly common at universities because excessive ventilation has a huge energy cost in research labs.

The traffic light stickers are a more novel way to promote smart conservation in the rest of the lab. Their design, refined in campus focus groups, addresses a cultural problem: No one wants to be the person who turns off the wrong thing and undermines a project. After all, said Meggie Patton, energy and environmental programs outreach coordinator, research requires some equipment to run perpetually and sometimes other machines to run for days.

“Labs are their own beast when it comes to energy savings,” Patton said. You can’t just do a campuswide energy saving initiative and group labs into that. Even each lab needs to be treated very differently.”

And so each lab can use the stickers however they feel is best to eliminate those pesky doubts about whether it’s OK to turn something off or leave it on.

In his lab, pilot tester Alexander Jaworski, assistant professor of neuroscience, has deployed stickers on lots of different machines. Most people in the lab surely know what to do, he said, but applying the stickers was certainly easy enough and they could help. Undergradutes who join the lab might not be as sure as current members, he noted, and sometimes even seasoned researchers can use a reminder.

“There is a microscope in the tissue culture room,” he said. “I always found that one of my students would forget to turn it off after using. It’s not like it’s going to cost me thousands of dollars in replacing bulbs, but turning it off is an energy saver and it does increase the lifetime of the bulb. I put the sticker on and it hasn’t been left on since then.”

As a scientist, Jaworski is not about to parade one anecdote around as proof, but science is not incompatible with intuition. His intuition told him, “It cannot hurt, that’s for sure.”

And from Powell’s perspective, the benefits the experiment produces at Brown could be just the beginning if it also prompts hundreds of students to include conservation in their lab work for the rest of their careers.

“No matter what we do in our buildings, it’s a drop in the bucket compared to the impact that those students are going to have out in the real world,” he said.

Pilot testing will expand and continue, and it may not be long before more labs put the simple stickers to research-protecting, energy-saving use.