Tracking the impact of climate change on bumblebees

A new study links climate change to the decline of bumblebee species in North America and Europe.

The study, published in the journal Science, found that bumblebee ranges are shrinking in the south and the insects are not moving north. In addition, some species are moving to higher elevations on both continents.

The study looked at data covering 67 bumblebee species over the course of 110 years, using specimens from institutional collections such as the Yale Peabody Museum of Natural History. “We’re one of the main contributors and provided large amounts of electronic data,” said co-author Lawrence Gall, a Peabody Museum entomologist. 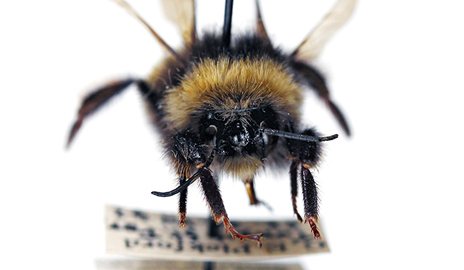 Lead author Jeremy Kerr of the University of Ottawa said range losses for bumblebees in southern Europe and North America total about 300 km. “The scale and pace of these losses are unprecedented,” Kerr said. “We need new strategies to help these species cope with the effects of human-caused climate change, perhaps assisting them to shift into northern areas.”