By examining the sense of touch in stroke patients, a University of Delaware cognitive psychologist has found evidence that the brains of these individuals may be highly plastic even years after being damaged.

The research is published in the March 6 edition of the journal Current Biology, in an article written by Jared Medina, assistant professor of psychology at UD, and Brenda Rapp of Johns Hopkins University’s Department of Cognitive Science. The findings, which are focused on patients who lost the sense of touch in their hands after a stroke, also have potential implications for other impairments caused by brain damage, Medina said. 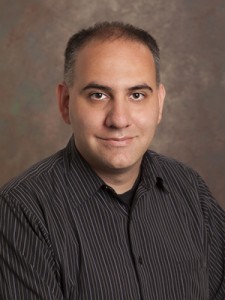 “Our lab is interested in how the brain represents the body, not just in the sense of touch,” he said. “That involves a lot of different areas of the brain.”

Those scientists also know that, following the brain damage a stroke causes, patients often regain some of what they initially lost due to that damage.

“Even if every neuron has been killed in the part of the brain that represents touch on the hand, that doesn’t mean that you’re never going to feel anything on your hand again,” Medina said. “We’ve known that isn’t the case because the map can reorganize. The brain can change due to injury.”

But what the new research by Medina and Rapp found is that the brains of those stroke patients may change much more easily than the undamaged brains of healthy people — what they call “hyper-lability.”

The researchers worked with people who had had strokes in the past that affected their ability to localize touch. Each research participant, without being able to see his hand, was touched on the wrist and then on the fingertips. When asked to pinpoint the second touch, the stroke patients reported sensing the touch farther down their finger, toward the wrist, rather than in its actual location.

Medina says that likely occurs because the neural map in the brain is shifting based on the earlier wrist touch — a phenomenon termed “experience-dependent plasticity.”

Hyper-plasticity has positive and negative implications, he said.

“On the positive side, this plasticity may potentially be harnessed in rehabilitation to improve function” after a stroke or various other types of brain injury, Medina said. But, he added, the brain may also be so plastic in those cases that changes aren’t stable, creating additional problems.

That’s what he expects additional research to address.

“Now that we’ve found that these maps are more plastic than we thought, can certain strategies help the map become more stable and more accurate again? That’s one of the next questions, and we can only answer it by continuing to learn more about how the mind works.”