Too Hot to Exercise? New Research Links Obesity to Temperature and Humidity

AUSTIN, Texas — If you live in the South and have trouble exercising during the muggy summer months, you’re not alone. New research by researchers at The University of Texas at Austin has found that adults are less physically active — and more obese — in counties where summers are hot, especially if they are also humid or rainy.

The new study, which appears in the American Journal of Public Health, also found that adults are less active and more obese in counties where winters are especially cold, cloudy and dark. 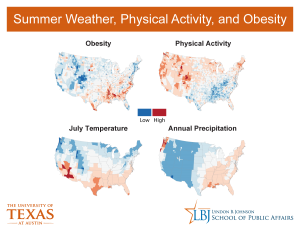 Image credit: The University of Texas at Austin (Click image to enlarge)

Summer weather helps to explain why some parts of the U.S. have more obesity than others. As shown in the study’s maps, many of the counties with the people who are least active and most obese are in the Southeast, where the summers are hot and wet, while many of the most active, least obese counties are in the mountain West, where summers are cool and dry.

“Living in Texas as I do, the results really resonated for me,” said Paul von Hippel, an assistant professor at the LBJ School of Public Affairs who wrote the study with doctoral student Rebecca Benson. “Around June or July here, it starts getting hard to think about going outside for a jog — or even a brisk walk — after work, which is close to the hottest part of the day. You have to come up with a strategy for staying active in the summer. Are you going to get out in the early morning, which is the coolest part of the day? Are you going to swim? Or are you going to do something indoors, like basketball or ice skating or just walking on a treadmill?”

Developers and planners who want to encourage physical activity should think about what people will and won’t do in summer heat, von Hippel said.

“Some planners are more thoughtful about that than others,” he said. “A great example of thoughtful planning is the hike-and-bike trail along Lady Bird Lake in Austin, Texas. It’s shady, it’s next to water and it attracts thousands of walkers, runners and bikers on the hottest summer days.”

On the other hand, says von Hippel, there are parts of Austin where the city has just painted a bicycle lane stripe on a sun-blasted asphalt road. “That will not encourage summer activity,” von Hippel said, “except among the truly hard core.”.

There are other influences on obesity, such as demographics, sprawl, parks, stores and restaurants. The study controlled for all those influences, however, summer heat and rain or humidity still mattered.

“In a sense, the importance of weather is obvious, but we looked at some other ‘obvious’ things, and they didn’t pan out,” von Hippel said. “For example, going in we knew that Coloradans were exceptionally thin and active, so we expected to find that hills and mountains encourage physical activity. But it turns out that terrain matters very little for activity or obesity. In some mountainous areas, like Colorado, people are very active, but in others, such as West Virginia, they aren’t.”