Tom Hanks and Yahoo! Are ‘Electric’ at CES

*Yahoo! to be the First Online Broadcast Partner for Hanks’ Groundbreaking Futuristic Series ‘Electric City’ from Playtone and Reliance Entertainment*

LAS VEGAS — Yahoo! the premier digital media company, and Reliance Entertainment, announced this evening that they have joined forces to bring Playtone’s multi-dimensional animated series “Electric City” to Yahoo! in 2012. “Electric City” was created by and stars Tom Hanks. As the online broadcast home for “Electric City,” Yahoo! will bring Hanks’ vision and storytelling to a global audience. Set in a futuristic society, “Electric City” is a new 90-minute, action-packed sci-fi adventure series; it marks Yahoo!’s first foray into original scripted programming.

The introduction of “Electric City” took center stage at a private, intimate event at CES with Tom Hanks and Ross Levinsohn, EVP Americas, Yahoo! on January 10 in Las Vegas. 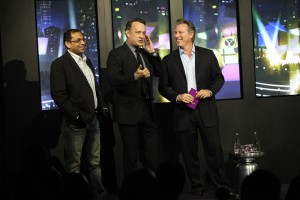 What is “Electric City”?

The world as we know it has ended and out of the rubble, the Electric City stands as a symbol of peace and security. Yet under the veneer of order lies a world full of secrets and violence. Secret police, back alley dealings, daring chase and murder all find a home in the “Electric City.” Through the lens of a functioning, yet dystopian metropolis, “Electric City” touches upon relevant global issues and themes including energy consumption, freedom of information, crime and punishment and more. 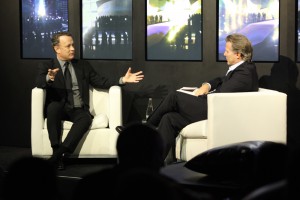 The story unfolds gradually, layering mystery upon mystery, inviting viewers to interact with the content and each other. Metaphors and symbols are woven throughout, creating a perfect environment for puzzle-solving and community interaction. Like good science fiction, “Electric City” raises provocative questions about our own way of life and value systems. Short-form connecting storylines combined with vivid animation and a compelling score will keep audiences watching, while metaphors and range of subject lines will keep them guessing—and reflecting.