Time capsule of the Big Bang

Using one of the world’s premier telescopes, University of Minnesota astrophysicists Evan Skillman and Kristen McQuinn have discovered a priceless relic of the Big Bang in the Milky Way’s back yard.

They are part of an international team that found Leo P, a tiny galaxy in the constellation Leo that contains relatively few stars, but has large clouds of hydrogen and helium. The ratio of elements in those clouds is of great interest because it is believed to mirror conditions in the first few minutes after the Big Bang.

Observing Leo P with the Large Binocular Telescope (LBT) on Arizona’s Mt. Graham, Skillman, a professor of astronomy, and McQuinn, a research associate, led studies of the galaxy’s distance and chemical composition and published their findings in the Astronomical Journal.

Big Bang theory describes how, in the infant Universe, the first hydrogen atoms formed, and some of them underwent fusion to make the first helium atoms. But cooling of the Universe halted these processes after only about five minutes, leaving a pool of the two elements.

“The original abundance of helium relative to hydrogen is one of the few measurements that directly probe the early Universe,” McQuinn explains. “There was only a short period when the temperature of the Universe was suitable for hydrogen atoms to fuse and form helium.

“If the helium abundance after that period can be measured and it matches predictions from theory, it lends support to the theory.” 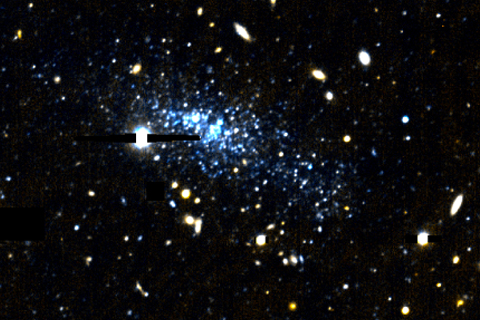 However, the pristine pool of hydrogen and helium was contaminated millions of years after the Big Bang, when the first stars appeared and did what stars do: burn hydrogen and helium into heavier elements. But small galaxies like Leo P are inefficient in forming stars and so have been minimally contaminated by heavier elements. While rare, they make ideal models of the original hydrogen/helium pool.

McQuinn, Skillman, and their colleagues measured the helium abundance in Leo P at about one helium atom for every 12 hydrogen atoms.

“That is a very good fit with theory,” Skillman notes.

Likewise, the name Leo P is a very good fit with the galaxy, since the “P” stands for pristine. And speaking of names, “helium” comes from the Greek Helios, the sun god, because it was in the spectrum of sunlight that helium first revealed its existence, in 1868. Since then the element has proven its worth for far more than supercooling or filling balloons.

“Studies of helium and other elements in stars and galaxies provide basic knowledge of nuclear processes and understanding the origin of the elements,” says Skillman. “These studies also reveal how laws of physics work—they are the basis for all modern technologies.

“Despite surveys which study millions of galaxies, there are only a handful of galaxies with properties comparable to Leo P, and they have been discovered at the rate of one per decade.”

Shaped like a lumpy pancake, Leo P is classified as a dwarf galaxy. Its long axis measures only 3,900 light-years, or about 4 percent of the Milky Way’s diameter. If the Milky Way were the width of a volleyball, Leo P would be about as big as a pea. With its shrimpy size and poverty of stars, it’s no wonder it went undiscovered for so long.

The researchers measured Leo P’s distance as just 5.7 million light-years, only three times as far as our nearest big neighbor, the Andromeda galaxy. Andromeda looms in the night sky just south of the Milky Way’s plane, but Leo P, along with the stars in that constellation, are on the northern side of our galaxy.

Soon we’ll have better images of our diminutive neighbor as Skillman, McQuinn, and their colleagues study the galaxy’s stars with the Hubble Space Telescope. Now that they’ve opened a time capsule of the Big Bang, who knows what other secrets they’ll discover?