The research, reported in the journal Royal Society Interface, found that combinations of three different antibiotics can often overcome bacteria’s resistance to antibiotics, even when none of the three antibiotics on their own — or even two of the three together — is effective.

The researchers grew E. coli bacteria in a laboratory and treated the samples with combinations of one, two and three antibiotics from a group of 14 drugs. The biologists studied how effectively every single possible combination of drugs worked to kill the bacteria.

Some combinations killed 100 percent of the bacteria, including 94 of the 364 three-drug groupings the researchers tested. According to Pamela Yeh, the paper’s senior author and a UCLA assistant professor of ecology and evolutionary biology, the success rate might have been even greater if the researchers tested higher doses of the drugs. 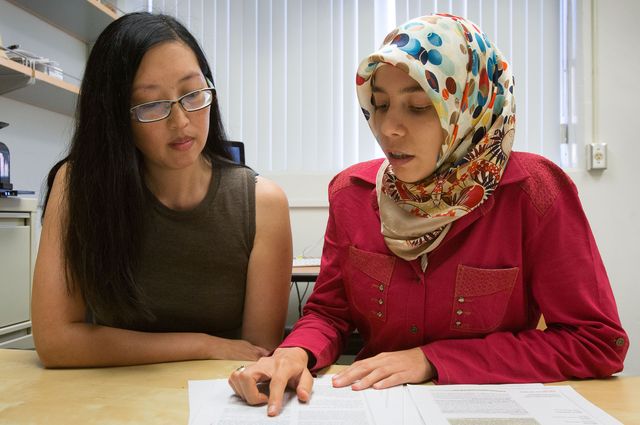 Pamela Yeh, Elif Tekin and their UCLA colleagues plan to offer open-access software based on their work that would let other scientists choose the most effective combinations of antibiotics. Image credit: Reed Hutchinson/UCLA

Elif Tekin, the paper’s lead author and a UCLA graduate student, helped create a sophisticated framework that enabled the scientists to determine when adding a third antibiotic was producing new effects that combinations of just two drugs couldn’t achieve.

“Three antibiotics can change the dynamic,” she said. “Not many scientists realize that three-drug combinations can have really beneficial effects that they would not have predicted even by studying all pairs of the antibiotics together.”

Different classes of antibiotics use different mechanisms to fight bacteria. One class, which includes amoxicillin, kill bacteria by preventing them from making cell walls. Another disrupts their tightly coiled DNA. A third inhibits their ability to make proteins. But there had been little previous research indicating that combinations of three antibiotics might be more potent together than any two of them.

“People tend to think that you don’t need to understand interactions beyond pairs,” said Van Savage, a co-author of the paper and a UCLA associate professor of ecology and evolutionary biology and of biomathematics. “We found that isn’t always so.”

The researchers combined techniques from biology and mathematics to determine which groups of antibiotics would be most effective.

“The three antibiotics must be chosen systematically and rationally,” Yeh said.

In addition to identifying certain combinations that were more potent than the researchers expected, the analysis revealed that adding a third antibiotic sometimes made the drug combination less potent — sometimes much less so, she said.

Yeh said the findings could be one weapon to fight what has become a major public health risk, but overcoming drug resistance will require a full arsenal.

Another benefit of three-drug combinations is that they could allow doctors to prescribe lower doses of each antibiotic, which could reduce side effects.

The researchers plan to make available open-access software that would let other scientists and clinicians decide which combinations of antibiotics will be most effective.

Yeh said the team’s approach could also be used to study how four or more pharmaceuticals interact, and a similar mathematical framework could be used to better understand climate change (for example, to understand how temperature, rainfall, humidity and acidity of the oceans interact) and other scientific questions that have three or more key factors.

The research was funded by the National Science Foundation, a James F. McDonnell Scholar Award in Complex Systems to Savage, and a Hellman Fellowship and a UCLA Faculty Career Development Award to Yeh.