REDMOND, Wash. — Sept. 1, 2010 — Some say the mouse’s days are numbered, but today Microsoft Corp. proves the gadget is alive and well by unveiling the Arc Touch Mouse, the first mouse designed to flatten for portability and pop up for comfort. The new mouse features Microsoft’s first touch scroll strip for easy navigation — just move a finger slowly for controlled scrolling or flick for hyperfast scrolling. Windows-based PC users will love packing up their laptop bags without the added bump of a mouse, as the Arc Touch Mouse flattens with just the touch of a finger.

As the computing landscape evolves to offer new ways of interacting, such as touch screens and touch pads, the mouse is also evolving but holds true to its core purpose: providing comfort and precision to users when navigating the PC.

“This is not the first time that the mouse has been threatened — look at 10 years ago when people started buying laptops that had integrated pointers and touch pads. Still, the mouse category continued to grow and grow,” said Brett Ostrum, general manager for the Hardware Group at Microsoft. “The reasons people need external mice will not change: comfort and precision. The Arc Touch Mouse just demonstrates again how committed Microsoft is to continuing to bring great new mice to consumers.” 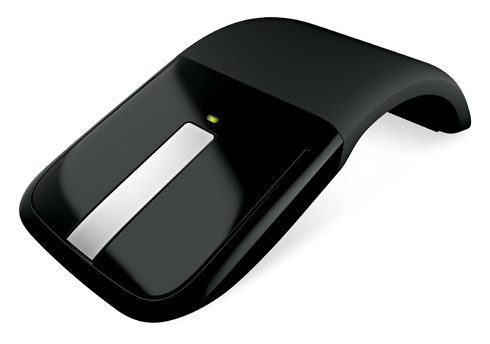 Designed for the Mobile Lifestyle

People today are using mobile computers more than ever, and they still want comfort and control when using them. In fact, one-third of mobile PC buyers also purchase a mouse with their new notebooks or netbooks.1 And, at less than 15 millimeters thick at its widest point, the Arc Touch Mouse was designed to deliver ultimate portability to easily slip into a bag, purse or pocket. It also goes from curved to flat with one simple movement, so working on the go is easier than ever — just collapse the Arc Touch Mouse to turn it off, and pop it up to turn on. It’s also extremely durable, tested to ensure years of performance.

With the Arc Touch Mouse’s touch strip, consumers can take control of their scrolling with a flick of a finger. Using a capacitive sensing technique and sensor pads, the strip corresponds to each position and velocity change to give users accurate, controlled scrolling no matter how fast or slow the movement. Move a finger slowly on the strip for controlled scrolling, or flick a finger for hyperfast scrolling that can be stopped with just a simple tap. The strip also has three tap “buttons” for added functionality: page up, page down and the middle click area, which is reprogrammable for whatever mouse function the user needs most.2 Switching from a scroll wheel to a touch strip is made easier with haptics, a vibration technology that simulates the bumps users would feel while using a traditional scroll wheel.

The Arc Touch Mouse is equipped with BlueTrack Technology, letting consumers track on virtually any surface,3 and a tiny magnetic snap-in Nano transceiver stores conveniently on the bottom of the mouse. Two AAA batteries give the Arc Touch Mouse more than six months of battery life, and the two-color battery life indicators let people know when the power is running low.

Arc Touch Mouse will be available for the estimated retail price of $69.95 (U.S.)4. It is available now for presale on Amazon.com, BestBuy.com and Buy.com, and it will ship in early December in time for the U.S. holiday season. It will be broadly available online and in stores in January 2011.

Microsoft backs this mouse with a worldwide three-year limited hardware warranty. More information about these and other Microsoft Hardware products can be found at https://www.microsoft.com/hardware.

3 BlueTrack Technology does not work on clear glass or mirrored surfaces.