There’s No Reason to Flip Over Earth’s Magnetic Field

What is often portrayed as a doomsday scenario in popular media is business as usual for our planet: a reversal of Earth’s magnetic field. What has happened before is bound to happen again — just not any time soon, according to new research led by a UA mathematician.

Imagine looking at a compass and finding the world has turned upside down: The red part of the needle that used to point north now swings in the opposite direction.

What sounds like a scenario from a bad 1960s science-fiction movie not only is a real phenomenon but bound to happen. Geophysicists have long known that Earth’s magnetic field, which acts as a vital shield against harmful solar radiation, has flipped many times over the course of its history — most recently, 780,000 years ago — and some scientists believe we are overdue for another flip.

Now a research collaboration led by a mathematician from the University of Arizona has published a study that makes predictions about the magnetic field with high confidence. Using all the paleomagnetic data available (recorded in rocks over the past 2 million years), the team produced a mathematical framework that accurately predicted all reversals during that time span and therefore allows for making realistic predictions into the future. 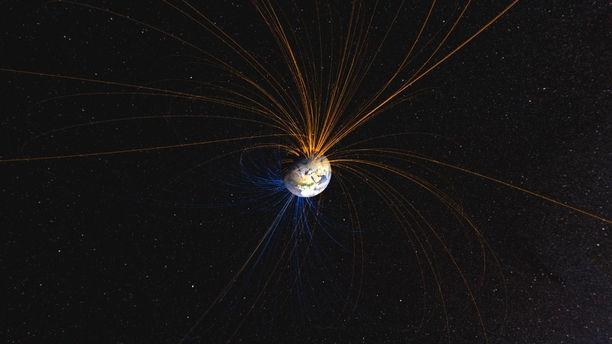 The study is published in the journal Physics of Earth and Planetary Interiors.

“Our technique is unique in that it makes use of simplified numerical models and sophisticated techniques to combine models and data,” says Matthias Morzfeld, an assistant professor in the UA’s Department of Mathematics and lead author of the study. “According to our calculations, there is no need to worry about a reversal for the next 4,000 years.”

Because it is generated by very complicated flow of liquid metal in the planet’s core, Earth’s magnetic field is much more complicated than the image familiar from textbooks: one North Pole and one South Pole, with invisible field lines running between them. In reality, there are additional pole components, although those are much weaker than the two poles most of us are familiar with.

“We know that reversals happen,” Morzfeld says, “but the problem is that nobody knows what the conditions are that lead to such an event, and what happens during the reversal. Does the field completely disappear, for example, or does it change shape?”

According to current — and competing — theories, a switch in Earth’s field is imminent when it weakens below a certain threshold or if it decays rapidly in strength. Because the current field is strong, yet decaying rapidly, some scientists take this as an indication that a reversal is about to happen, while others maintain that the field is too strong to switch.

Morzfeld’s team set out to find out which theory is more likely to be correct, by combining simplified mathematical models with geophysical data gathered by studying the magnetization of rocks.

“We have detailed data from the past several decades, and measurements from ships over the past several centuries, but if we go past that, we only have rocks to look at,” Morzfeld says. “The magnetization of rocks tells us something about the field, so we have 2 million years of data that tell us the strength of the field and its configuration.”

Rather than attempting to calculate the extremely complex processes underlying Earth’s magnetic field, Morzfeld and his co-authors used models simple enough to run on a laptop computer, and fed them data of the past 2 million years, which have seen seven.

Because a realistic mathematical description of the processes of liquid metal flow that fuel the magnetic field would require millions of equations, no computer can compute a faithful representation of these processes over millions of years. But in order to be useful, mathematical models may not need to be that complicated.

“By using low-dimensional models, which are basically simplified cartoons for what is happening inside the planet, we can apply very sophisticated, up-to-date algorithms to combine the models with geophysical data,” Morzfeld says. “That allows users to reduce the model a little bit in its requirements for the computation and dedicate more computing resources on integrating it with the data.”

The team then put the models to the test using a technique called hindcasting.

“We use the data from the geophysical record to calibrate the model, and then we stop using the data,” Morzfeld explains. “Next, we pick an arbitrary time point in the past and make a prediction. And if we find that our model accurately predicts what happened in the past, we can assume it will also predict the future with some confidence.”

Of several models tested, one emerged as particularly simple and powerful, successfully predicting all magnetic field reversal events over the past 2 million years. The model uses three equations: one describing the dipole, one describing a non-dipole field and a third representing the effects of the flow inside the core.

Interestingly, the researchers found no support for the existence of a proposed “point of no return,” a threshold of field strength acting as a trigger for field reversal. But with the help of their models, they did find reliable thresholds in terms of computed probabilities.

“The models and our mathematical frameworks allow us to compute probabilities of events such as ‘a reversal happens within 4,000 years.’ We found that if our computed probabilities exceed a threshold, then a reversal indeed is very likely to happen.”

On average, Earth has seen a reversal of its magnetic field every 250,000 years, although the in-between periods vary greatly. So when it finally happens, what should humans expect?

“The field would become very weak,” Morzfeld explains, “but nobody knows what would happen next. It’s possible that the field just changes shape and goes from the dipole into the quadrupole configuration. It’s also possible that the field completely collapses, and that would be pretty bad because it would expose the planet to solar wind, affecting satellites, among other things. On the other hand, field reversals have happened, and life on Earth has survived.”

The study was conducted in collaboration with Alexandre Fournier and Gauthier Hulot at the Institut de Physique du Globe de Paris and was funded in part by a UA Global Initiatives “International Research Development Grant” and by the National Science Foundation.

Morzfeld says the project was possible only because of the collaboration across disciplines, bringing together an applied mathematician and two geophysicists. After meeting his collaborators at a conference, he visited them in Paris to begin working on this project.

“They introduced me to the models, and I introduced them to methods that combine the models with data,” he says. “Together we came up with a framework and a set of tests that we can use to assess how well these models make predictions. It would not have been feasible if any of us had been missing from the team.”