The world’s rarest skeleton stands on four legs once again

The Grant Museum of Zoology at UCL is nearing the end of a major project to restore 39 of their largest and most significant skeletons to their former glory. The main focus of the project, named Bone Idols: Protecting our Iconic Skeletons, has been the Museum’s quagga specimen – which is one of only seven quagga skeletons to survive globally.

The last living quagga died in 1883, having been hunted to extinction by farmers and skin-collectors. The Grant Museum specimen is the only one on display in the UK but the skeleton was incomplete with one of its legs missing since World War II. 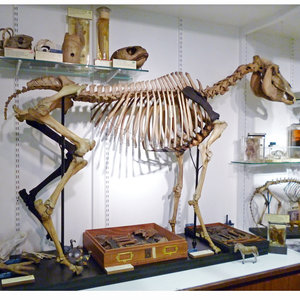 The Quagga with its new 3D printed leg (Image credit: Grant Museum of Zoology at UCL)

Specialist skeleton conservator Nigel Larkin worked with Dr Laura Porro and Professor Renate Weller at the Royal Veterinary College (RVC) to scan the quagga’s one remaining right hind leg in a CT machine, who then created a precise mirror-image of the resulting data, perfectly replicating the missing left leg on the screen.

This computer image was then modelled in solid nylon using a 3D-printer at the Bartlett Manufacturing and Design Exchange (B-made) at the UCL Bartlett School of Architecture, to recreate the bones of a long extinct species for the Museum. Larkin then articulated the printed bones to make the historic skeleton complete once more, rebuilding the nineteenth century skeleton using twenty-first century science.

The reproduction of the missing leg was the final step in a major undertaking to restore the Museum’s invaluable specimen. As part of the Bone Idols project, the quagga skeleton was completely disassembled and cleaned of over 100 years of ingrained grime (the Museum is one of the oldest in the country and used to be lit by oil lamps). Its breast bones had been oozing black fatty deposits, which have now been removed. The skeleton was first mounted onto an iron frame in 1911, with five other skeletons at a cost of just £14. The neck was on upside down and the legs didn’t fit into their sockets. Since then the spine had sagged under its own weight. The project has rebuilt the quagga in an anatomically correct position on a skeleton-friendly frame.

Museum Manager Jack Ashby says, “Because of its age the quagga was in a pretty poor state, particularly for such an irreplaceable object. Through our Bone Idols project, we have worked with specialist bone conservators to restore the skeleton to ensure its long-term survival in the Museum. It will now be enjoyed by visitors, students and researchers for decades to come. We are so delighted that we’ve been able to give it its missing leg back. Not only does it add a fantastic chapter to a specimen with so many stories, but the new leg also makes the whole skeleton more stable. Try balancing on three legs for 100 years.”

There are many parts to the quagga skeleton’s story. Its significance was only confirmed in 1972 when the Grant Museum’s two “zebra” skeletons were closely studied. This one was verified as an extinct quagga, while the other was downgraded to donkey. Throughout the Museum’s history these two specimens seem to have been confused a number of times. Newly uncovered archives suggest the quagga arrived in 1911, thirty years after the species became extinct.

Where its leg went is another mystery, and the archive has many letters from previous curators to museums across the country trying to track it down. The quagga now stands on four feet again, even if one of them was built by computers.

To date the Museum has raised over £20,000 to fund the Bone Idols project. 31 of the 39 specimens have so far been conserved, including the Museum’s largest skeleton – the (hornless) Indian one-horned rhino skeleton, the skull of a giant deer and endangered chimpanzee skeletons.

The Grant Museum of Zoology, UCL is open to the public Monday-Saturday 1-5pm. More details of the Bone Idols: Protecting our Iconic Skeletons project, and how you can support it, can be found here: https://www.ucl.ac.uk/museums/zoology/support/BoneIdols