EAST LANSING, Mich. — It’s commonly known, at least among microbiologists, that microbes have an additional option to living or dying — dormancy.

Dormant microbes are less like zombies and more like hibernating bears. What isn’t known, however, is how large numbers of dormant microorganisms affect the natural environments when they act as microbial seed banks. In the current issue of Nature Reviews: Microbiology, Jay Lennon, Michigan State University assistant professor of microbiology and molecular genetics, examines the cellular mechanisms that allow microbes to hibernate and addresses the implications they can have on larger ecosystems such as soil, oceans, lakes and the human body. 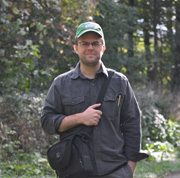 “Only a tiny fraction is metabolically active at any given time,” said Lennon, who is affiliated with MSU’s Kellogg Biological Station and MSU’s AgBioResearch. “How would our environment be altered, in terms of carbon emissions, nutrient cycling and greenhouse gases such as nitrous oxide, by dramatic increases or decreases in the dormancy of microbes?”

Dormancy is a reversible state of low metabolic activity that organisms enter when they encounter hard times, such as freezing temperatures or starvation. Unlike plants that follow predictable growth cycles, microbes don’t have to follow a linear progression. They could be growing, experience distress and go back to sleep. Once conditions change, they could start growing again without having to go through a full cycle.

“However, it does take a certain level of commitment, a certain energy investment to make it happen,” Lennon said. “Just as people don’t run out and winterize their homes if it gets cool in August, microbes want to be sure that truly hard times have set in before shifting into a dormant phase.”

Consider that 90 percent of soil microorganisms are typically dormant and only half of bacterial species are active. Lennon and his co-author, Stuart Jones at the University of Notre Dame, theorize that dormancy and the presence of such large reservoirs of microbial “seed banks” have important implications for biodiversity and the stability and functioning of ecosystem services.

“The idea of a microbial seed bank is a rather novel concept, but from our research we found that dormancy and seed banks are prevalent in most ecosystems.” Lennon said. “What’s fascinating is that there’s only a small fraction that are active, which means there’s a large reservoir that could potentially be activated at any given time.”

Dormancy and the seed bank effect make microbes more resilient and could play key roles in microbial biodiversity as species migrate or simply remain mostly dormant over extended periods, he added. Dormancy could also help explain the sudden outbreak of diseases, he said, perhaps sparked by some change in the environment.

“One-third of world’s population carries dormant tuberculosis microbes,” he said. “Obviously, you can live a long time with the dormant cell in your body, but it’s important to understand what can trigger its reanimation or what maintains its dormancy.”

As Lennon continues his research, he is particularly interested in identifying the triggers of dormancy and activation cycles as well as how climate change affects these processes.

Lennon’s research is funded in part by the National Science Foundation.