A story about how a blacksmith learned to forge new tools in the fight against cancer.

When Everett Stone was a teenager, he thought he had found his career – blacksmithing. But life rarely takes us in a direct line between point A and point B. For most people, it is full of unexpected twists and turns. So it was for him on a path to becoming a leading cancer researcher at The University of Texas at Austin.

Everett started blacksmithing when he was 16. As a boy growing up on a farm, he spent most of his time outside in nature and around animals. He became fascinated by making things and using his hands to solve problems. One of those problems was helping his horses with their sore feet. 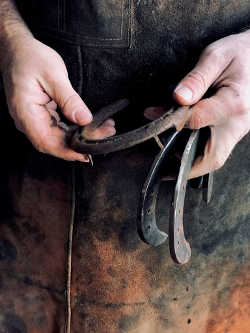 Everett holding some of his handmade horseshoes. Photo by Sara R. Lentz

“I was very much into horses,” says Everett. “The problem where we lived though is that the ground is very rocky, and horses can become lame if their hooves wear down too fast. You need to protect their feet. So when I was 16, I went to a horseshoeing school in Oklahoma City.”

And that was that. For the next 14 years, he ran his own horseshoeing business. His favorite projects involved working with veterinarians to create specialty shoes for horses with injured or damaged hooves.

Eventually, horseshoeing lost its allure, and Everett developed an interest in medical science. At age 26, he decided to go to college.

Everett, who was homeschooled, never attended a formal high school or college. He says that when he walked into his first community college course on human anatomy and physiology, he didn’t know what to expect.

“Oh, man. I loved it! The poor graduate student that was teaching the course. She finally pulled me aside and begged me to quit asking so many questions until after class,” laughs Everett.

Originally when he went to college, he wanted to become a veterinarian, but as he threw himself into education, he became enthralled with biology research.

“Research is amazing,” he says. “It’s kind of the thrill of discovery and maybe the creativity that comes in there too, because I feel like science can be very creative. It is about finding new ways to answer a question.”

Everett is scientific co-founder of two biopharmaceutical startups, where he serves as consultant in the clinical development of therapeutic enzyme technologies: Aeglea BioTherapeutics, the first therapeutics venture-capitalist-funded company in Texas to come out of UT Austin; and Kyn Therapeutics, which secured $28 million from venture capitalists in 2016. He is co-inventor on 15 patents and patent applications.

He is currently working on a new drug that could help the immune system fight cancer cells before they take hold. A molecule that healthy cells produce and recycle, called methylthioadenosine (MTA), is also produced by cancerous cells but is not always recycled, allowing it to be secreted outside of the cell and inhibit immune cells. Everett thinks that eliminating MTA could be a viable target for immunotherapy treatment. His findings suggest that MTA is protecting the cancer from the immune system.

His team’s new drug neutralizes this cloak-and-dagger molecule and would allow the body to fight off the cancer before it grows.

“When you apply this drug, you’re getting tumor cells exposed to the immune system where they weren’t before, and the immune system says, ‘Ah, yes. You shouldn’t be here! Now we go to work.’ And that’s really exciting. In a couple of models here, we’re getting complete cures,” says Everett.

His research on this new drug will be submitted soon to research journals for peer review.

“I feel like an overarching theme in my career is that I’ve made many, many tools. Some of them are good enough to be medicines,” he says.

Everett still enjoys forging metal tools in his garage blacksmith shop. His heirloom 100-year-old anvil sees regular use. He doesn’t focus on horseshoes these days, but has turned toward the surprisingly hard challenge of perfecting his chef knives. After a long day at the lab, reconnecting with blacksmithing in his shop is grounding.

“There is something tangible and very satisfying about making things with your hands,” he says. “For me, it helps keep the creative process flowing. I even solve some scientific problems while I’m forging a raw piece of steel into a knife.”