With LUX ZEPLIN Berkeley Lab researchers seek to increase the sensitivity of LUX, the most sensitive search for dark matter yet, by orders of magnitude

Although it’s invisible, dark matter accounts for at least 80 percent of the matter in the universe. No one knows what it is, but most scientists would bet on weakly interacting massive particles, or WIMPs.

LUX, the Large Underground Xenon detector at the Sanford Underground Research Facility in the Black Hills of South Dakota, is calling that bet with a titanium bottle holding 350 kilograms of liquid xenon, placed in a cavern 4,850 feet down in the former Homestake gold mine. LUX is a trap set for dark-matter WIMPs.

The LUX Collaboration is led by Rick Gaitskell of Brown University and Dan McKinsey of Yale University and brings together over 70 researchers from 14 institutions, many with extensive previous experience in detecting weakly interacting particles. Participants from the U.S. Department of Energy’s Lawrence Berkeley National Laboratory (Berkeley Lab) contribute expertise from such fruitful neutrino experiments as the Sudbury Neutrino Observatory (SNO), the Kamioka Liquid-scintillator Anti-Neutrino Detector (KamLAND), and the Daya Bay Reactor Neutrino Experiment. 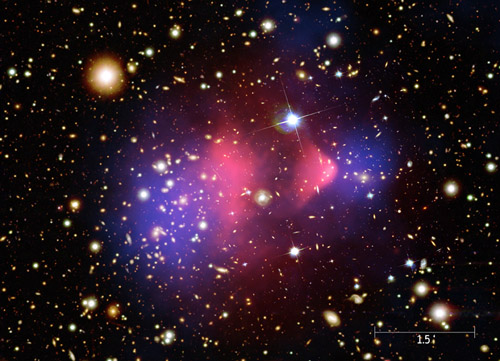 The Bullet Cluster of galaxies is shown in visible light, x-ray emission (pink), and the calculated distribution of invisible dark matter (blue). Dark matter can be measured on the cosmic scale by its gravitational effects, but no one knows what it is. WIMPs, weakly interacting massive particles, are the leading candidate. (Images NASA and Chandra X-Ray Observatory)

As the lead institution within the Department of Energy for the Sanford Underground Research Facility, Berkeley Lab is making other contributions that are less specific but no less important. Kevin Lesko of the Lab’s Nuclear Science Division heads DOE’s Sanford Lab program. Since the early 2000s he’s championed the Homestake mine as the best site for this kind of research, and has spearheaded planning and development for the overall facility as well as technical preparations for specific experiments, including LUX.

“The LUX experiment and its proposed follow-on, LUX ZEPLIN, bring together a very strong collaboration, experienced in creating and operating detectors with superbly limited instrumental backgrounds,” says Lesko. “We give the collaboration extremely well-shielded facilities – 4,850 feet of rock above the detector to screen out cosmic rays, plus a surrounding rock formation that’s a factor of 10 to 20 lower in radioactivity than other underground locations – including even those that are deeper than Homestake.”

LUX is described at length in the April 2012 issue of symmetry magazine, online at https://www.symmetrymagazine.org/cms/?pid=1000939.

Lighting up the dark matter

The name “weakly interacting massive particle” is a near tautology. Dark matter has to be massive: its gravitational effects are most obvious in the shape and motion of galaxies. Yet if it interacted with atomic nuclei via the strong force, or with any matter at all via electromagnetism, it wouldn’t be dark in the first place.

A WIMP detector has to be big enough to catch at least a few interactions a year. Just as important, the detector has to pinpoint these interactions. For neutrinos – which are WIMP-like, but have miniscule mass and move at near light speed – the detector can be as simple as a large volume of water in which debris from neutrino collisions moves faster than the speed of light in water, leaving a trail of easily detected Cherenkov radiation.

By contrast, WIMPs may be tens to hundreds of times more massive than protons, dawdling along at a couple of hundred kilometers a second. Liquid xenon makes a wide target for WIMPs, because xenon atoms have a large nucleus (up to 142 nucleons), are readily ionized when struck, and are good scintillators.

LUX’s 350 kilograms of liquid xenon are held in a cylindrical titanium tank and cooled to minus 108 degrees Celsius. Above the liquid xenon is a thin space filled with xenon gas. When struck by an incoming particle, a liquid-xenon atom sheds the collision energy as a faint flash of light, which is picked up by photomultiplier tubes at the bottom and top of the detector. The electrons knocked loose in the collision are pulled straight toward the top of the tank by a strong electric field.

Xenon gas is also a good scintillator, and as the electrons are pulled into the gas they stimulate a brighter flash of light that marks the location of the collision in two side-to-side dimensions. The third dimension, depth, is supplied by the travel time between the first and second flashes, which reveals how deep in the tank the collision occurred. This method of reconstructing particle interactions in three dimensions is akin to the principle of the Time Projection Chamber, a widely used type of particle detector invented by Berkeley Lab physicist David Nygren in the 1970s.

The brightness of the two flashes reveals the energy of the collision, plus information about the kind of collision that produced it. WIMPs will have a distinctive signature. For example, unlike neutrons, the chances are nil that after hitting one nucleus a weakly interacting particle will hit another on the bounce. 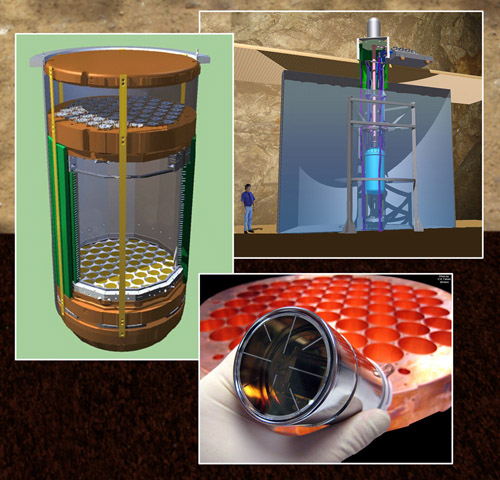 The LUX detector (left) is filled with liquid xenon cooled to minus 108 degrees Celsius. Arrays of photomultiplier tubes (lower right) are at top and bottom and catch the faint light when a WIMP interacts with a xenon nucleus. Electrons knocked loose in the collision are pulled by a strong electric field into the xenon gas near the top of the tank and emit a brighter flash; by comparing the flashes and the time between them, the energy, position, and nature of the collision are determined. The xenon container is immersed in a tank of water to provide extra shielding (upper right). (Images McKinsey Group, Yale University, Carlos Faham, and luxdarkmatter)

Berkeley Lab researchers are among the leaders of the proposed next stage of the dark matter search at the Davis Campus. In many ways LUX ZEPLIN is a scaled-up version of LUX. The infrastructure that supports LUX, including the huge, eight-meters-in-diameter water tank that surrounds it, was deliberately built with an LZ-scale experiment in mind.

Murdock “Gil” Gilchriese and Bill Edwards, of UC Berkeley and Berkeley Lab’s Physics Division, share project-manager responsibility for LZ, a collaboration among members of LUX and the similar dark matter-search ZEPLIN (a tortuous acronym for “zoned proportional scintillation in liquid noble gases”). Successive iterations of ZEPLIN ran in England from the late 1990s to 2011, and ZEPLIN‑III achieved the best-ever background discrimination for a two-phase (liquid and gas) experiment that used a noble element as a detector.

“I have to keep telling people LZ doesn’t stand for Led Zeppelin,” Gilchriese says. “While the design we’re proposing to the National Science Foundation and the Department of Energy is based on LUX, it’s not just the size that’s different. We’re incorporating new capabilities beyond those that both LUX and ZEPLIN have already demonstrated.”

The size is certainly different. Where LUX uses 350 kilograms of liquid xenon, roughly a third of a metric ton, LZ will use seven metric tons; the inner vessel that will hold the xenon is the biggest piece of equipment that can be lowered by the mine’s lift cage, fully assembled, to the Davis Campus level. 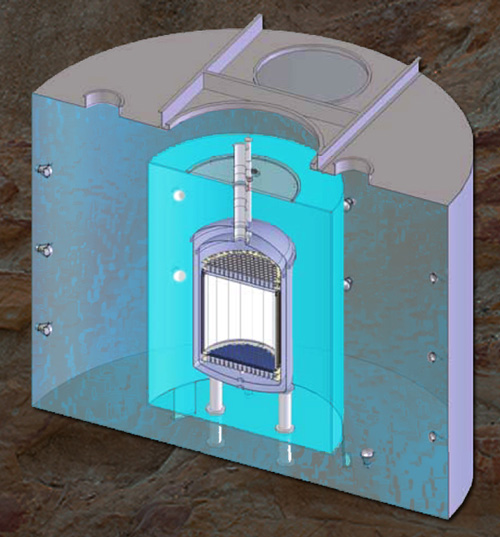 The proposed LUX ZEPLIN would contain seven metric tons of liquid xenon in its innermost vessel. The xenon container would be immersed in an acrylic tank of organic liquid scintillator to help identify non-WIMP events. The outer vessel is the existing steel tank of water, which helps shield the experiment from radioactive decay in the surrounding rock. There will be many more photomultiplier tubes than indicated here. Image credit: Berkeley Lab

One of the principal advances in LZ will be that its inner tank will be surrounded by a large, clear-acrylic tank filled with liquid organic scintillator. LUX, except for the overlying rock and surrounding water, is essentially self-shielding – meaning that only events in the inner part of the detector are counted, and any reactions near the walls of the tank are ignored as possible background. In LZ an outer “skin” of liquid xenon will still play a part in shielding the inner chamber’s interior from gamma rays, but the surrounding liquid organic scintillator will substantially enhance the ability to “veto” (tag as non-WIMPs) background particles.

In addition, says Gilchriese, “even this deep underground, there are still a few cosmic rays.” The background will be unambiguously identified wherever it comes from, and most of the volume of liquid xenon in the inner vessel will be a clean medium for WIMP searches.

The technology of nested vessels of different kinds of scintillator, surrounded by photomultiplier tubes, was recently put to the test at Daya Bay, which achieved spectacular success in measuring neutrino oscillations even before the experiment’s full array of antineutrino detectors had been deployed.

“Now that the Daya Bay Project is nearing completion, I’d like to apply what we’ve learned to building an experiment that’s even deeper underground and has even lower background,” says Edwards, who is U.S. Project and Operations Manager for Daya Bay, an international collaboration led by the U.S. and China. “I’m excited by the challenge of a dark matter search, trying to find that needle in a haystack – that small and so-far unobserved signal in a vast array of background.”

Because the properties of WIMPs are still theoretical, finding them depends on hypothetical characteristics such as their mass and spin. Detectors like LUX aren’t the only way to look for WIMPs. If, as many theorists propose, they are supersymmetric particles unlike anything in the Standard Model, it may be able to create them with the Large Hadron Collider, an “active” WIMP detector. LZ is a “passive” detector, yet it will be able to cover a wide range of particle masses with great sensitivity.

“People have been trying to detect dark matter directly for a quarter of a century,” says Gilchriese. “So far there have been some suggestive events but no unambiguous detections. Liquid noble-element detectors have proved themselves the most sensitive, and LUX is the biggest and most sensitive yet.”

The LZ proposal covers many other technological advances to address the challenges faced by a multi-ton, supercold detector placed deep underground. With a detector of this unprecedented sensitivity, the scientific promise is profound.

“With our South Dakota supporters we have created a state-of-the-art laboratory facility exploiting the natural advantages of Homestake,” says Lesko. “We are employing all the lessons we learned from our experimental experiences in Sudbury, Kamioka, and Gran Sasso to provide the experiments with the best possible facility in the Sanford Laboratory.”