The Puzzle to Plugging the Worst Natural Gas Release in History

By the time Lawrence Berkeley National Laboratory (Berkeley Lab) scientists Barry Freifeld and Curt Oldenburg visited the Aliso Canyon natural gas storage facility in December 2015, the SS-25 well blowout had been leaking natural gas into the air for more than six weeks. The notoriously strong winds at Aliso Canyon carried the natural gas and its added odorant to the nearby Porter Ranch neighborhood, leading to thousands of families evacuating their homes.

Along with scientists and engineers from Lawrence Livermore National Laboratory and Sandia National Laboratories, the Berkeley Lab crew made up the so-called “Lab Team,” called in by state officials for their expertise in well integrity and well-flow modeling.

They got to work trying to figure out why eight top-kill attempts – in which heavy fluids and other materials are pumped into the well in an attempt to plug it from above – had failed. Using T2Well, a software tool developed at Berkeley Lab, Lehua Pan, a Berkeley Lab scientist with expertise in soil physics and numerical modeling, was able to simulate the behavior of the leaking well and evaluate why the top kills weren’t working. 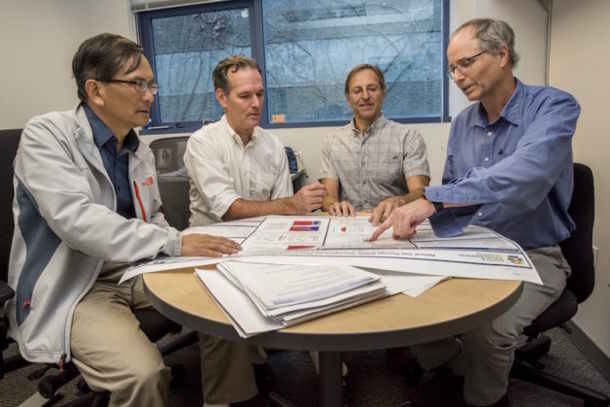 Berkeley Lab’s modeling showed that the well’s complex geometry was contributing to the failed top-kill attempts. The simulations also showed that a relief well would be effective. Indeed, the blowout stopped within 10 minutes of the relief well intersecting the leaking SS-25 well, just as the simulations suggested.

Berkeley Lab scientists are not new to disaster response. In 2010 many of the same scientists dropped everything to assess the Deepwater Horizon’s Macondo well blowout in the Gulf of Mexico. Also using T2Well to model that well, they estimated how much oil and gas were actually flowing out to the sea floor.

T2Well is an extension of the TOUGH (Transport of Unsaturated Groundwater and Heat) codes, a suite of software tools developed at Berkeley Lab that uses numerical models to simulate the flow of liquid, gas, and heat in porous materials and wells. With Berkeley Lab’s expertise in geosciences and computer modeling, it has been continuously improved over the years.

Now, two years after the leak was first detected, Berkeley Lab is involved in multiple state efforts to ensure such a disaster doesn’t happen again, to mitigate risk if it does, and to assess the long-term viability of underground gas storage in California. The Lab Team was also a key contributor to a national task force report issued last year containing 44 recommendations to reduce chances of similar incidents.

“I think the recommendations we made are fairly comprehensive and will go a long way toward correcting the fact that people weren’t overseeing these wells,” Freifeld said. “Aliso Canyon caused the federal government to sort of wake up and realize that PHMSA has a role to play in the subsurface, not just pipelines.”

Toughest safety rules in the country

At the state level, the Lab Team has been working with the Department of Conservation’s Division of Oil, Gas, and Geothermal Resources (DOGGR) to provide technical expertise for the development of new beefed-up safety regulations for natural gas storage wells in California. Emergency rules were put in place since last year, and proposed permanent regulations are under review.

The proposed rules in California would require at least two containment barriers everywhere in a well, so that two components of well integrity would need to fail simultaneously to allow a leak similar to the 2015 Aliso Canyon incident. “They’re the most stringent rules in the country,” Freifeld said. “They touch on many aspects of safety that weren’t in the rules before. They’re really the gold standard and set a high bar for the national standard.”

Additionally, two members of the original Lab Team (Oldenburg and Berkeley Lab’s Preston Jordan) are lead authors on several sections of the California Council on Science and Technology (CCST) report commissioned by Gov. Jerry Brown to assess and make recommendations on the long-term viability of underground gas storage in California. CCST will deliver the final peer-reviewed report to the California Public Utilities Commission by the end of 2017.