For certain kinds of cancer, the most effective therapy does not use x-rays or gamma rays but beams of ions, the electrically charged cores of atoms, including hydrogen ions (protons) and heavier ions such as carbon and neon.

The world’s foremost experts in this unique medical therapy are meeting at a workshop for Ion Beams in Biology and Medicine on October 26-29 at the Claremont Hotel in Oakland, Calif., sponsored by Berkeley Lab’s Accelerator and Fusion Research Division. It’s the 13th gathering of this international workshop, but the first to be held in the United States.

This is a curious fact in itself, considering that the entire field of ion beam therapy and nuclear medicine was developed principally at Berkeley Lab and arose from the early work of Ernest Lawrence, inventor of the cyclotron, and his physician brother, John. Late in 1936, John Lawrence performed the first cancer therapy with radioactive isotopes artificially produced with a particle accelerator; he later investigated using charged particle beams directly for therapy.

Today, beams of protons or heavier ions can be accelerated to precisely calculated energies and can be accurately targeted to tumors, which may be large or very small and may be dangerously shaped or positioned – surrounding the spinal cord, for example, or close to the optic nerve, or in the center of the brain. Due to their physical and biological properties, ion beams can target the tumor cells with precision, while minimizing damage to surrounding tissues. Thus ion-beam therapy is a better choice for treatment to avoid high-risk surgery, widespread damage from other forms of radiation therapy like x-rays, or the debilitating effects of drugs that may unnecessarily affect the body’s normal tissues.

The rise of ion-beam therapy

In the years following World War II, Berkeley Lab launched major programs of ion-beam research. In 1946 Ernest Lawrence asked Robert Wilson, a former student of his then at Harvard, to make certain calculations of radiation shielding, which led Wilson to conclude that the Bragg peak (the maximum energy deposition) of beams of hadrons – strongly interacting particles including protons – made them promising for radiation therapy. Properly targeted, hadron beams could put virtually all their energy into the tumor, destroying it while limiting the damage to other tissues characteristic of x-ray therapy. 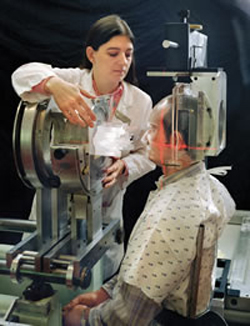 Cancer patients were treated at the Bevalac with the help of a plastic head positioner and beam compensator. Image credit: Berkeley Lab

Protons were first tested as a cancer therapy for humans at Berkeley Lab beginning in 1954, using the 184-Inch Cyclotron as the source of the proton beams. Wilson, who later founded the Fermi National Accelerator Laboratory in Illinois, helped establish the first hospital-based proton therapy center in the United States at the Loma Linda University Medical Center in Southern California. World-wide, some 70,000 patients have now been treated with proton beams.

Berkeley Lab’s Cornelius “Toby” Tobias had pioneered the biomedical applications of proton beams in 1948, and in 1955 he worked with physicians to begin treating human patients, extending medical therapy to the use of helium ions. In 1957 Berkeley Lab’s Heavy Ion Linear Accelerator (HILAC) was built, and Tobias and others started investigating the use of heavier ion beams in cancer therapy.

In the 1970s, heavy ions from the HILAC were piped into the Bevatron proton accelerator to form the Bevalac. With the Bevalac, radiation oncologist Dr. Joseph Castro of the University of California, San Francisco led long-term clinical trials that established the biomedical properties of carbon, neon, silicon, and argon beams, resulting in the first evidence that heavy charged-ion beams could be safely and effectively used to treat cancer.

Until the Bevatron was shut down in 1993, almost 3,000 patients, including some 1,400 cancer patients, were treated at the 184-Inch Cyclotron and the Bevalac. Over time it became evident that heavier beams of neon and carbon were the most effective at treating certain types of cancers that were not responsive to conventional therapies or involved greater radiation doses to surrounding normal tissues.

These included prostate cancer and cancers of the head and neck, such as salivary gland tumors. Long-term results from the clinical trial showed that the effect of ion beams on tumors was due to precise physical dose distributions, and also to unique biological effectiveness. Still heavier ion beams such as silicon and argon, however, were not as beneficial as beams of neon and carbon.

Although many proposals for medical accelerator facilities were put forth by Berkeley Lab researchers and their colleagues in the late 1980s and early 1990s, a combination of economic and social factors prevented their realization. The world’s first dedicated carbon-ion medical facility, although inspired by the work at Berkeley Lab, was not built in California but in Japan.

The success of heavy-ion therapy overseas

HIMAC, the Heavy Ion Medical Accelerator in Chiba, Japan, began the first full clinical trials with carbon-ion therapy in 1994. In Japan, HIMAC was joined by two more carbon-beam facilities: one in Hyogo in 2002, and a second at Gunma University in 2010. The Japanese plan to build additional, more compact carbon-ion accelerators using the Gunma machine with its smaller footprint as a prototype.

In Germany, the Heidelberg Ion-Beam Therapy (HIT) Center opened in 2009; clinical studies of over 400 patients in Germany had previously documented a cure rate of up to 90 percent using carbon-ion beams. In Italy, France, Austria, and China, ion-beam centers are under construction. Over 7,000 patients have been treated by today’s heavy-ion facilities. 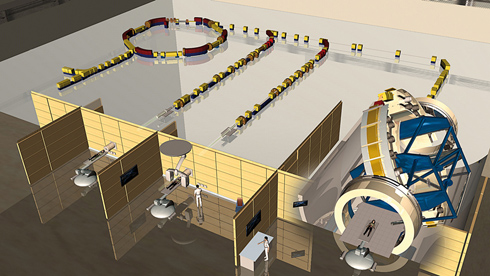 About the image: Of three treatment rooms in the Heidelberg Ion-Beam Therapy Center, the one on the right uses a massive gantry that can steer and direct the beams to the patient from almost any angle. Image credit: Berkeley Lab

Although it’s estimated that some 4,500 patients a year in the greater Bay Area could benefit from ion-beam therapy with either protons or carbon ions, there are no proton- or carbon-ion-beam facilities in Northern California, and no carbon-ion facilities at all in the U.S. While major proton facilities have operated in Loma Linda, Calif. and Boston, Mass., only recently has the U.S. begun to catch up with the rest of the world in building additional proton-beam facilities.

No doubt the high cost of these facilities, which require particle accelerators and elaborate gantry mechanisms to steer and precisely aim the ion beams, is an important factor in the slow adoption of ion-beam therapy in the United States. Costs rapidly come down with experience, however; in Japan the new Gunma facility cost a third as much as the HIMAC facility on which it was modeled.

The October workshop on Ion Beams in Biology and Medicine promises lively debate on these questions. Along with presentations on accelerators, beams, gantries, and detectors, and discussions of the biological and medical effects of different kinds of particle beams on different tissues and organs – including spirited comparisons of proton-beam versus carbon-beam therapy – the attendees will discuss the challenge of bringing heavy-ion therapy back to the U.S.

To discuss the relative merits of protons and carbon ions in cancer therapy, Joseph Castro and other former colleagues of the late Professor Tobias, including Eleanor Blakely of the Life Sciences Division founded by John Lawrence, will be joined by experts from other institutions including physicians Hirohiko Tsujii of Japan’s National Institute of Radiological Sciences, Stephanie Combs of the Heidelberg Ion-Beam Therapy Center, and Herman Suit of Massachusetts General Hospital. Their discussion will make use of data from clinical trials, including those at Berkeley Lab going back to the 1970s.

Obstacles to reintroducing heavy-ion therapy to the U.S. will be addressed in a roundtable discussion by Combs, Suit, Tsujii, and others, including William Chu of the Accelerator and Fusion Research Division, a long-time colleague of Tobias’s. The roundtable will be chaired by Dr. Mack Roach, Chairman of the Department of Radiation Oncology at the University of California, San Francisco, and Richard Hoppe, Chairman of the Department of Radiation Oncology of Stanford University.

Among the many other distinguished participants at the workshop, former Berkeley Lab Director Andrew Sessler will have a unique perspective on the successes and set-backs of ion-beam therapy in the U.S. Sessler was director from 1973 to 1980 and is currently a staff scientist in the Accelerator and Fusion Research Division, which he founded in 1977. Sessler greatly expanded the Lab’s mission from an exclusive focus on high-energy physics to programs in Earth sciences, energy efficiency, new energy sources, and a renewed and broadened interest in health and medicine. His support for the heavy-ion beam pioneers was critical to the success of these therapies around the world.