The photographer and the serpent handlers

Pond, a photographer who spent six years documenting the life of Pastor Wolford and his family and church in rural West Virginia, talks about him as kind, humble and selfless – qualities he showed her many times, even though she was a nonreligious outsider in his community. 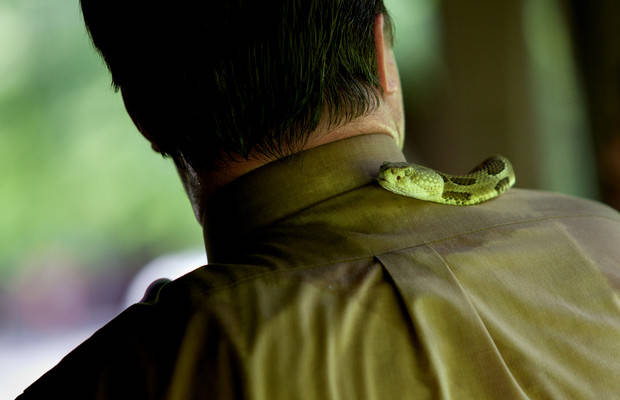 Pastor Mack Wolford’s rattlesnake slithers around his neck during an outdoor service in May 2011. (Photo credit: Lauren Pond)

Mack is gone now, the victim of a snake bite that he received during a religious service that Pond photographed. He lives on, however, in Pond’s book Test of Faith: Signs, Serpents, Salvation, a photo essay that offers an intimate portrait of Mack and his family.

The book documents serpent handling, of course, but it does more than that. It tells the story of how Mack’s death and Pond’s handling of it caused a rift in her friendship with the family, and how Pond received an unexpected gift of forgiveness and redemption. It rejects the caricature of serpent handlers as religious weirdos by vividly portraying the humanity of the Wolford family.

“Ever since I started photographing serpent handlers in 2011, I had been dreaming that my work would one day become a book – one that would provide a more nuanced portrayal of this religious community, which I had quickly grown to know and love, but which faces widespread derision and criticism for its seemingly outlandish beliefs,” Pond said in a recent talk at The Ohio State University.

“After Mack’s death, publishing a book had become an even more important goal for me, as I wanted to create something tangible for his family – something to help honor his life and beliefs.”