The Next Generation of Ice Cream: One Bite, Two Flavors

COLUMBIA, Mo. ­— As the spoon slides into your mouth, you feel the freshness of the ice cream cool your mouth with a rich vanilla flavor. Yet, as you dig your spoon in for more, the vanilla changes, ever so slightly at first, but then to a distinct second flavor as you begin to taste cherry just before you swallow that first bite. The two-flavor, or “flavor release,” ice cream is an experimental ice cream that is being tested by researchers at the University of Missouri College of Agriculture, Food and Natural Resources.

Using a process known as “micro-encapsulation,” Elizabeth Fenner, a food science graduate student, and Ingolf Gruen, associate professor and chair of food sciences, developed the ice cream that starts as one flavor and — after immediately breaking down inside the mouth — releases a second flavor.

“The process is commonly used in long-lasting chewing gum and microwave cooking, but it really hasn’t been tried successfully in anything cold or food that is swallowed quickly,” Fenner said. “We did face some challenges. Obviously, ice cream doesn’t stay in your mouth as long as gum, so we had to rely on the heat of the mouth to break down the coating in order to release the second flavor.” 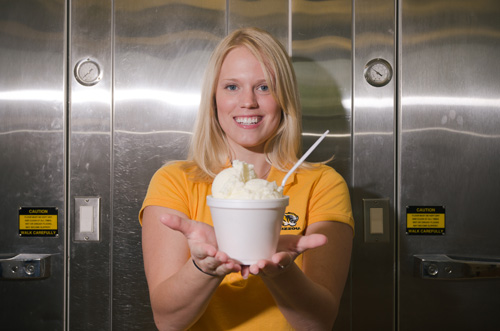 Micro-encapsulation of food is a relatively new science that is less than two decades old.  It involves covering flavor compounds in a wax, gelatin, protein or other type of casing just millionths of a millimeter in size. In addition to chewing gum, the process is used to coat probiotic bacteria for protection from gastric activity or to delay premature flavor release in food during microwaving.  Many long-acting pharmaceuticals use this technology, Gruen said.

While taste tests have been favorable, the micro-encapsulation also has other benefits for the ice cream. Volatile flavor compounds in conventional ice cream might start breaking down after about six months of storage, leaving ice cream somewhat tasteless, and food coloring darkens over time. Fenner found that the encapsulated ice cream can potentially last twice as long in original taste, texture and color.

“While we don’t have plans to make this commercially available just yet, that possibility is always open,” Gruen said. “We’ve had other products open to the commercial market in the past, such as our new pro-biotic ice cream that was introduced to a limited audience this month. Taste testers also indicated that they would consider buying the flavor-release product and many wanted more samples.”